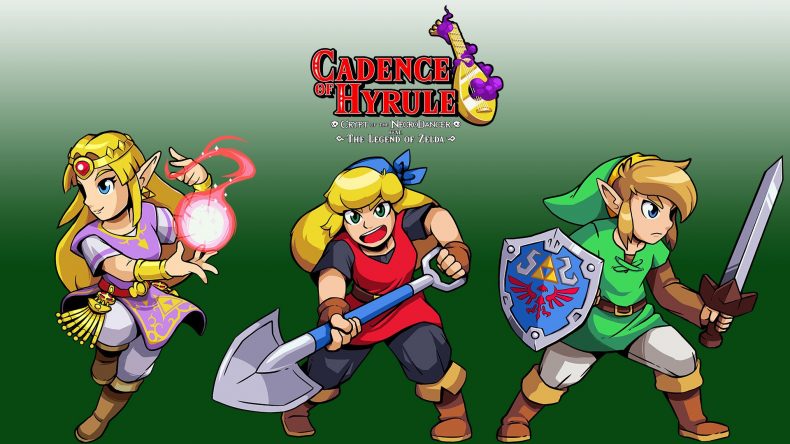 Things have changed a lot since I was a kid. Phones now not only connect you to your friends, they connect you to the world, people are living longer, and Nintendo isn’t quite as precious as it used to be. Nintendo has always been a funny company, never wanting its consoles or IP to be sullied in any way, but here in the twenty-first century Nintendo consoles now play host to hyper-violence and the company is happy allowing indie developers to handle one of its most cherished franchises.

Brace Yourself Games’ Crypt of the NecroDancer is a roguelike rhythm action game where you need to tie your movement to the beat of the music. This in turn improves the loot you get from monsters you kill. Similarly, in Cadence of Hyrule, ensuring you keep to the beat of the music improves the damage you do, and with some items improves their usage during the game. The monsters will move to the beat too and you’ll need to learn their attack patterns and weak spots to defeat them. The dungeons are randomly generated, but the overworld is not, and I guess we should call this a rhythm-action-RPG. Let’s start with the most obvious thing: the music is awesome. Composer Danny Baranowsky has remixed the traditional Legend of Zelda music and given it a funky tone while still keeping them true to the original themes. All the while there are enemies on screen the music’s tempo is ramped up and you’ll need to keep to the beat to kill them all; once done, the music softens and you can move how you like. It’s hard to say whether this is good or bad as that’s down to personal preference, but it’s nice to not feel pressured by the presence of an enemy and the beat timing – although the music is just so good you kind of want to listen to it forever.

Despite the rhythmic nature of the gameplay, this is still a Zelda game and many of that series’ tropes will be refreshingly familiar to longstanding fans. Items like the hookshot and power glove return, and you’ll be tasked with defeating a series of bosses before you can fight the big boss – Octavo – at the end. The bosses are beautifully designed, incorporating musical instruments into traditional Zelda boss designs. Their attack patterns are also incredibly familiar, despite being set to the beat.

It’ll also be worth your time exploring the map as well. I spent ages going round the map mopping up chests, beating enemies and finding little challenges to take on. Doing this will increase your survivability exponentially, because if you die you’ll inevitably be sent back to the beginning again, where you can spend diamonds gained from killing monsters on a selection of items to give you a slight edge on your next run. Thankfully, with this reset any of the key items you gained on your last run will be in your inventory so you won’t have to track those down again. Also a relief is that across the map there are Sheikah slates for you to activate, which allow you to warp to them; this makes map traversal after a death reset considerably less strenuous. If you’re worried about playing this because you’re musically illiterate, you can switch the game to ‘Fixed beat mode’, where you’re freed from the beat of the music and can move how you like. Doing this also means monsters only move when you do, making planning your moves much easier. It also makes this feel more like a Zelda game than a rhythm action one, but it does lessen the difficulty considerably, and if you take into account how short the game is you’ll probably beat it sooner than you were hoping you would. The purest experience is playing it in the way it was intended – in the groove, but at least the option is there for those less musically-inclined than others.

As well as the key items there is a selection of other fringe items that you regularly pick up such as a spade for digging out certain sections, or a torch to increase your viewing range in dark areas. These items have limited durability and new ones need to be sourced regularly or they’ll break, leaving you either unable to explore some areas or at a disadvantage against enemies outside your vision. This mechanic does feel unnecessary, as finding yourself without one of these items at a key moment can be frustrating, especially if you were trying to use one to get to something in particular and to now find yourself stuck. Granted you can teleport to a different Sheikah slate to free yourself, but unless you know where to source the item you need you’ll be flying blind.

I can’t really complain about anything else though; this is an immaculately designed game and I doubt Nintendo itself could have done it any better. There’s a wealth of things to find and even though the map seems small you can spend hours just going round it looking for anything you missed. If this is the result of Nintendo entrusting its IP to indie developers, I really hope we’ll see this with some other ones because, frankly, this is excellent. When I wasn’t playing I was humming the music, and when I finished it I frantically searched for where I could listen to the soundtrack. I’ve never done that with a game before. It’s easy to baulk over a purchase because of its price tag but you shouldn’t let that put you off here. Cadence of Hyrule’s price is completely justified because it’s just plain brilliant, blending The Legend of Zelda and Crypt of the NecroDancer without diluting either experience. Now if you’ll excuse me, the soundtrack is on YouTube and I’m going to go listen to it.

A marriage made in heaven, Cadence of Hyrule is a toe-tapping, monster slaying groove-fest

Crypt of the NecroDancer Will Ship With Two Remixed Soundtracks