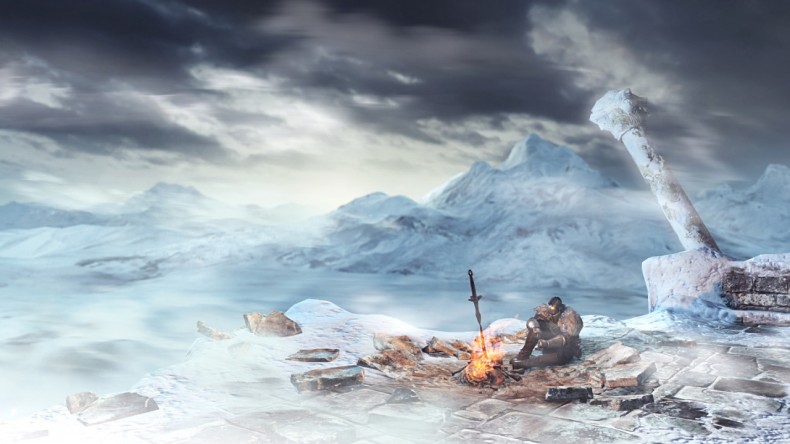 Firstly, I know you’ve probably bought this and played it, or at least played most of it. I said in the Crown of the Sunken King review, the score here means little in terms of your buying decision. So let’s call this an opinion with a number at the bottom . Let’s call this a chat between two people who understand the phrase “prepare to die”. Let’s call this an appreciation of the end of a series, the raising of a glass, if you will. Clink clink.

Eleum Loyce reminds me of the end of Journey. You can feel the ice as it encrusts your feet with every step you take, a thin sheen gently painting your armour as you make your way through the harsh winds. FromSoftware have made this place bitter and sharp, and the road to rest may be many hours away for some of the visitors to this land. The Crown of the Ivory King pushes the difficulty so close to the boundaries of fairness that it almost tips over the edge. I say almost because this is Dark Souls 2 after all. This is you savouring the last shred of content for this series; this is you moving forward a step at a time once again, shield raised and Estus flask at the ready. This is about figuring out attack patterns and when to strike, about finding shortcuts and enjoying breathing space between attacks. It’s about cheering inside when you find that bonfire, and cursing the twenty five thousand souls you just lost by walking off a ledge.

So let me get the small frustrations out the way. An invisible boss where you are warned not to go who utterly wrecks you when you ignore the warning? That’s fair enough. An invisible enemy that comes from nowhere and backstabs you quite far from your last bonfire? Well, that had me perturbed. That had me flipping the finger at the TV. It’s noticeable because it was cheap. It’s also not how the Dark Souls 2 I know plays.

I can tell you about the innovations, though, the changes FromSoftware have brought in, for the last content update of the series. It’s testament to the commitment that they have, and the obvious love for their IP. There’s a touch of Metroidvania present, you see. The need to find an item in order to progress is present here, which in turn allows you access to previously inaccessible areas and frozen treasure. It’s a great addition, as going back and retracing your steps is amply rewarded. There are also some great do you/don’t you attack moments with some of the creatures you encounter. One of these is cheeky to the extreme in terms of a tribute to all your friendlier encounters. You must gather reinforcements for the last battle, which forces you to explore the game, and there’s something rather cool about seeing your comrades readying themselves before they take that final plunge into the chaos below – and they do manage to hold their own as well, which is an impressive sight to behold.

Ironically,the bosses themselves seem to be less of a challenge than the previous episodes. In fairness there was a soul level difference of at least thirty between my character when they started in Shulva and finished in the icy winds of Eleum Loyce, which may have accounted for this. Again, I found summoning helped, but was less of a necessity this time. Once again a familiar face crops up to snarl hello at you. The Bosses are well designed and provide a challenge without being overly frustrating. The last boss went down after my second attempt, while Sinh haunted my sleep for a couple of days.

Even after the last battle finishes, you still have the option to continue on, in order to collect rewards for duelling in the chaos. This reflects the essence of what the game is about: continuing to explore even after the finish line, discovering the treats FromSoftware wants you to find. If anything, the additional DLC has added more to a game that was already offering so much, and I’m personally glad that we finished on the high that this franchise deserved – although, the real Souls fans know that we never truly finish. There’s always that new build to try, or that speed run to tackle. The DLC has added more places to die, that’s all. So raise a glass, my friend, and let’s have a toast. Though don’t worry about the ice: FromSoftware brought enough for everyone.

Eleum Loyce is beautiful.
New incentives to explore.
A fine end to the series.

Challenging and well designed, this swan song is how you do it.