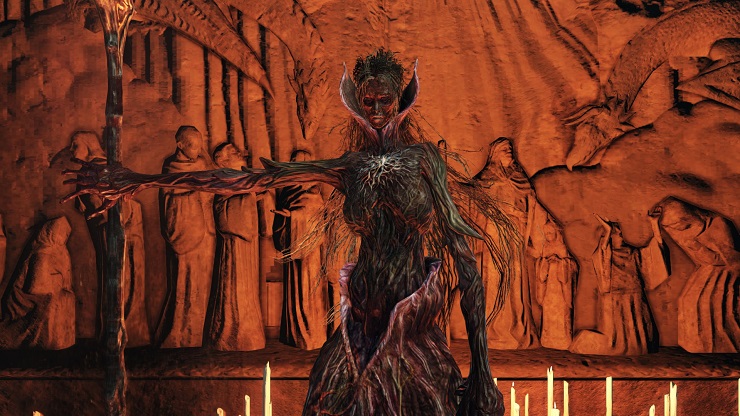 We’ve all experienced the frustration of not being able to defeat a boss in a game, and anyone who’s played a Dark Souls game will definitely know that pain, but that feeling you get when you finally take them down is one of the best things in videogames. Always will be, too.

One of the banes of my Dark Souls existence came in the form of Elana, The Squalid Queen, at the very bottom of Dark Souls II’s Crown of the Sunken King DLC. The penultimate boss of the DLC, she displays traits of the vanilla game’s final boss which already means she’s a tough one, but she also has several enemies that she can summon during the fight. Knowing this beforehand (I didn’t go through the DLC until Scholar of the First Sin arrived on Xbox One and PS4) I decided to summon a couple of NPCs to aid me in the battle. For those of you unaware, summoning NPCs or other players in Dark Souls will result in the bosses having more health, evening the odds so that you can’t just overwhelm the boss and destroy them in a few hits. This wasn’t the main problem against Elana. I discovered over the first few attempts to defeat her that the issue was down to just exactly which creature she chose to summon when faced with a 3 vs 1 situation.

When faced with three opponents, Elana likes to summon a version of Velstadt, a boss faced within the story of Dark Souls II. So, not only did I have to face a boss with power comparable to the main game’s end boss, I had to contend with a second boss at the same time, one that wasn’t exactly a pushover on his own! The biggest problem is that if your co-op partners die, you’re faced with a boss with increased health, plus any summons she may have brought along to the party. This happened many times over the course of about an hour, and I was either left with my face pounded into mush by Velstadt’s great hammer, or blasted into oblivion by Elana’s dark magic and pyromancy. After these infuriating failures went on, the summoned NPCs and players seemed to do worse against the Squalid Queen, dying earlier and earlier, leaving me ever more difficult battles. Considering the precarious drops required to reach the boss every time I died, I began growing more and more impatient as time went on. I decided on one last go for the night, even deciding to forego summoning, face Elana on my own. Part of me probably hoped to be killed quickly so I could end my rotten endeavour and return another day.

There was no Velstadt summoned, only a handful of simple skeletons. I avoided her attacks, took out each lot of skeletons she summoned, got in close for a few attacks. I repeated this process, hope beginning to return to me and a renewed caution to go with it. My health was drained a few times by mistimed rolls and one or two greedy moments, trying one more attack than necessary and paying the price, but my end never came. When I landed that killing blow, I literally punched the air in relief with great elation. Elana sums up the Dark Souls series perfectly: you will die, and die often, but through patience (and sheer bloodymindedness) even the most hopeless battles can eventually be won.