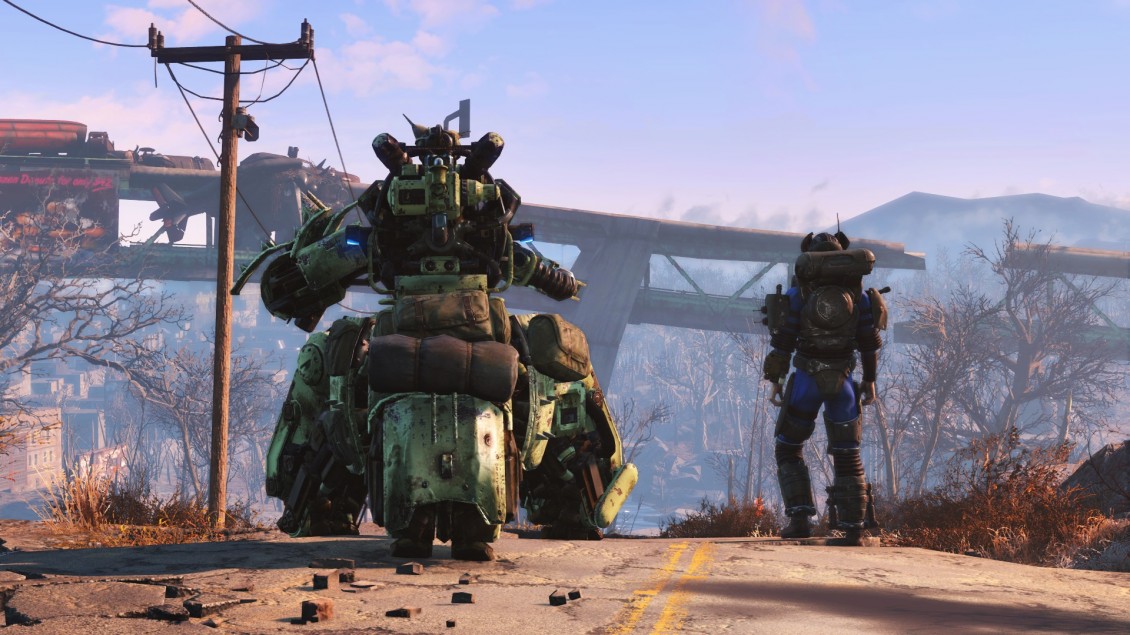 Fallout 4‘s season pass is off to an enjoyable if short-lived start with Automatron, a slice of DLC that brings new missions, new enemies, new weapons, and yet another way to distract yourself from the grimness of the Wasteland.

It begins when you follow a distress signal and find a caravan slaughtered by merciless robots controlled by a self-styled villain who likes to be known as the Mechanist. The only survivor is a robot named Ada, who joins you as a companion and compels you to end the Mechanist’s tyranny and give her fallen friends peace.

Spread across four main missions, Automatron lasts for about four hours, and I spent a large chunk of that time looking for materials for the new crafting station. One of the first things Ada asks you to do is build a robot workstation, which allows you to either customise your mechanical companions or create a new one from scratch. This being Fallout 4, the options are impressive as long as you have the necessary components. After creating a base model, you can make a huge number of adjustments. Your robot can walk, travel on caterpillar tracks or hover; you can outfit it with blades, guns, laser cannons, flamethrowers or claws; there are numerous head, limb and torso combinations. You can even add a lick of paint and choose the voice.

How you come by these components is just as fun. In short, you get them by destroying the psychotic murder-bots that now stalk he Commonwealth thanks to the Mechanist. The enemy variety is decent, introducing a good mix of ranged attackers and a new robot that will literally run at you an leap on you. The first few times they will take you by surprise, as it’s something you’re just not used to seeing in Fallout 4. I died a few times on some of the tougher encounters, especially as they also throw a new bandit type at you in the form of the Rust Devils, human enemies who use robots like attack dog and wear their scavenged body parts as armour.

The missions are standard fare and don’t add much beyond the robot baddies, but you’ll play it to conclusion just because it’s more of what you like. The robot crafting is the icing on the cake, but it’s not all sweet to the taste. The story itself lacks any real pizzazz, content to simply give you a new villain and ask you to complete some busy work until it’s time to kill him. The Mechanist himself is fairly disappointing, too. The boss fight is decent, but his character is by-the-numbers, as is snarky “Robo-brain” Jezebel, whose body you need to build as part of the story so that she’ll help you find and defeat the enemy. It’s nothing we haven’t seen before in the main game, and shines a light on the fact that eccentric characters only carry you so far. Eventually, the writers will need to come up with something new. Ada herself is conflicted enough to be interesting, but only just. At a certain point you’ll need to reassure her that it wasn’t her fault her companions died and from then on, she’s kind of okay with it.

Luckily, the robot crafting and new enemies are enough to carry Automatron above a smattering of bugs and glitches that bleed in from the main game. It crashed for me on two boss fights, and the usual visual anomalies persisted as robot parts floated in mid-air or vibrated around the floor after a fire fight. It’s to be expected with given the main game, maybe, but that isn’t an excuse. Thankfully, Automatron’s positives are enough to make it a solid opening jaunt into Fallout 4’s future.

Fallout 4's first DLC offering adds some interesting elements to the established formula, but it's over in a blink and still just as buggy.