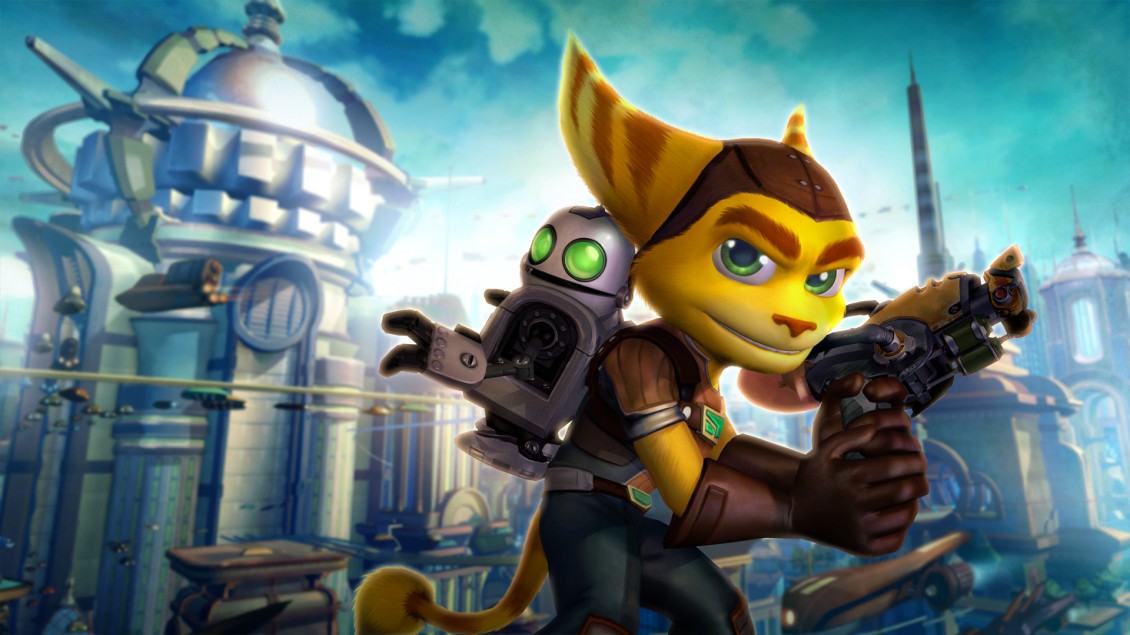 When I was young, I didn’t dream of playing hyper realistic first-person shooters. I didn’t hope that, one day, I could shoot the face right off someone in a burst of viscera and crimson. No, I thought about how amazing animated movies (we called them films back then) looked, and how perhaps one day technology could allow me to go from playing Manic Miner, to something that was like a cartoon movie; but a game. As time went on, Pixar came to be, and I noticed that people didn’t care for making “gamey” experiences any more. Nope, it’s all about Call of Duty, and fair play to them for that, if that’s what’s popular, then okay.

But thank heavens for Ratchet & Clank for delivering on those hopes, because this new one (which is the game of a movie of a game) reboots the franchise, and is like playing a Pixar flick, it’s that gorgeous. Importantly, in an age where we seem quite happy to accept technically inept performance from our beloved hobby, it maintains a solid framerate throughout some utterly incredible action. We’re talking a screen full of bolts flying towards Ratchet after he’s decimated a mini army of enemies, with enemies that are half based on lighting effects (the groovitron: a weapon that throws a disco ball down and makes your enemies dance, thus leaving them vulnerable) and half based on carnage, and somehow it all stays crisp and faultless. It’s a wonder to look at, and something we’ve lost a little bit in our quest to be photo-real.

Elsewhere, the locations are varied and full of wonder. An optional ocean planet that finally nets you the ability to breath underwater is like something out of a holiday brochure, while other planets are grim yet still look colourful and pretty. The smaller maps mean that you might end up exactly where you started, but it’s the moment to moment gameplay that carries Ratchet & Clank through to the very end, and caused me to waste hours doing optional quests, just because it was fun to do so. There’s something to Insomniac’s design, there really is, it just feels so fluid and enjoyable. Going from a platforming section (long live the double jump) into a third person shooting section, it just ebbs and flows beautifully. Once locked into shooting with the left trigger, you can strafe around, and when you jump, you’ll continue to shoot but do a flip in the air to dodge enemy bullets. Then you’ll smash some grunt enemies away with your wrench, switch to another of the creative weapons, and do it all again. Using weapons will upgrade them, so it’s worth trying lots of them out in order to find your preferred loadout. Hidden nooks and crannies contain collectibles like raritanium (the currency to upgrade your weapons), or the newest addition to the series: the holocards.

These collectibles come in three parts, and when you grab all three you unlock a bonus: it could be gathering more random raritanium from enemies, or to unlock new weapons for the challenge mode. If you get duplicates from random drops, you can trade five in for one you need. It’s highly addictive, and I’d probably be interested in a real-life Top Trumps Ratchet & Clank set. Flipping each card reveals where the gun, person, or place first appeared in the series, handily reminding you that it has history – it may never have received the plaudits I felt it should, but this is a series that’s been there for a long time.

For all the visual splendor, it’s quite a simple game. Shoot things, jump places, maybe do some optional stuff. In-between there are upgrades and new gear that’ll spice things up, but it never really pushes the envelope into territory that feels new. If there’s one complaint it’s that, despite the clear visual upgrade, this feels incredibly similar to the final PS3 outing from 2013, Nexus. That’s not a bad thing, of course, as that was a superb game. Where it differs is in length, and while Nexus was a short affair, the reboot is a more hefty affair.

As is often the case, you get to control Clank for some smaller sections that are puzzle based. These are fine, and decent enough distractions (as are the few times you’ll control a spaceship or hoverboard) but the meat of the game is definitely the jumping and shooting. Clank gets to collect little Gadgetbots and figure out how to use electric, bridges, and jump-pads, but it’s all a bit slow, and thus slightly forgettable. Speaking of which, while the story is one that’s been told before, it remains no more than “okay” as a tale. Good versus evil, bad guy wants to take over the world – it’s very much what you’d expect. Captain Qwark and friends return and are as over-the-top as ever, and the original voice actors do a fine job reprising their roles. For an audience new to the series, it’ll come across as possibly a bit dated, and where the cut-scenes would have once stood out as Pixar-lites, now they nearly match the game itself, which is amazing to think about, really.

I’m glad Ratchet & Clank is getting a run out for a new generation (perhaps in more ways than one), because it remains a simple yet fun series to play, even if long-term fans will need to play on hard to get a challenge. While it may be simplistic to some, the visuals should keep you paying attention to the end. Some guns will hardly get used (the novelty ones like the Pixelator: a gun that turns enemies 8-bit, will be used once and discarded for others) and it also doesn’t do a huge amount to differ from games that have come before, moreover if this is to be the start of a new run of games it’ll need to iterate on the mechanic aspects, but what’s here is excellent fun, and shows that imagination is sometimes better than reality.

Support us by purchasing from these links:

Some guns will be underused.
Doesn't do much new.
Story is just ok.

A glorious looking debut for Ratchet & Clank on PS4 that retains the superb ebb and flow the series has always had. It doesn't do a huge amount new, but what's here is great fun.