previous
Moss Review
random
next
Secret of Mana Review
1 like 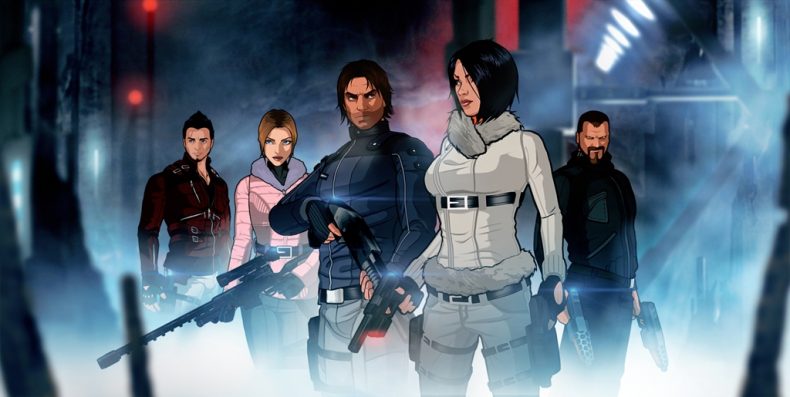 How the mighty have fallen. Isn’t that how the saying goes? It might be a tad dramatic to start a review with such a negative sentiment, but sadly it’s the first thing that sprung to mind when I began playing Fear Effect Sedna.

For the sake of fairness, there’s a proviso before I start that very few games in the history of the medium have the same rose-tinted effect on me as Kronos Digital’s sci-fi horror franchise. So much so that after jumping up and down with joy when both games became backwards compatible on PS Vita, I played around 4 minutes of each before deleting them in abject denial and refusing to accept the truth that they’ve aged about as well as cheese left out in the sun.

I remember playing Fear Effect and its sequel Retro Helix when they first launched in the late 90s, at a time when games didn’t so much launch as wander onto the market. There was no hype machine, and the industry as we know it today was still popping zits in the mirror. And I remember being absolutely in love with the series – particularly the first game. The story of a handful of mercenary rogues hired to rescue the missing daughter of a Chinese businessman descended so wonderfully into mind-bending horror and mythology that the insanely hard puzzle and insta-death didn’t put me off. And of course, games were tougher then anyway, blah blah blah.

When the third game in the series, Inferno, was cancelled mid-development, I was gutted but moved on. Other games filled the void and I consigned Fear Effect to a special place in my heart – until the recent announcement of Sedna, a new adventure reuniting the old team. I’m pretty sure everyone tried really hard to ignore the words “tactical action game” in the pitch and hoped it was just a careless typo. Well, unfortunately, it was not. Sedna is, in fact, an isometric tactical action game, and one that fails to fully replicate anything but the aesthetics of its older siblings.

It brings together protagonists Hana Tsu-Vachel, Royce Glas, Deke, and Rain, throwing them into a whole new mess of bullets and black magic in semi-futuristic setting when they’re hired to steal a priceless statuette. Pretty soon, the whole things is descending into madness again – but sadly I’m not just talking about the storyline. Fear Effect Sedna is not a good game – and this is from someone who fully admits he has an overly-positive perception of the franchise. For a start, the dialogue is stuck firmly in 1999, injecting every sentence uttered by Hana and Rain with painful innuendo and forced sexuality. Australian hard-case Deke murmurs cliché rubbish about “mates” and “Sheilas”, while my previous favourite character Glas basically fills in the “grizzled burn-out” role. Essentially, they’re exactly the same characters as they were at the turn of the millennium, and 18 years later that’s just not good enough. It’s difficult to sell a character-driven narrative when all the characters are so fundamentally unlikeable. I stumbled upon a couple of moments where Sushee tried to do something a little different, such as Deke attempting to eavesdrop on guests at a high society party, while refilling everyone’s drinks. It was a nice change of pace from sneaking and shooting, but these moments are few and far between.

Nothing brings Fear Effect: Sedna into line with modern games. In an effort to capture the feel of the previous releases, characters move the same as they did, which is to say they look as though they’re ice-skating above the floor. Poor dialogue and bad delivery hamstrings any narrative tension, and the environments suffer from cut-and-paste-itis, rarely producing a backdrop worth looking at. All of this would be forgivable if the combat was better, but it’s so clunky and laboured that every encounter is a chore unless you use stealth, which is just as unsatisfying because you rarely sneak past anyone you don’t have to kill. Areas are filled with too many guards on rigid patrols, and it’s easier to systematically murder everyone in the area before trying to do anything, especially as many of the puzzles require exhaustive backtracking. If you don’t kill everyone, combat is a laborious task at the best of times. You can crouch to take cover, but enemies will just run towards you and stand bolt upright putting bullets in you until one of you drops dead. There’s no sense of nuance or style here like in, say, XCOM, even though you can tactically pause to position your characters. Instead, your mercs and the enemy will literally stand within touching distance (or closer, due to some clumsy detection) and shoot each other to death. Which takes about six shots. It looks horrendous in motion, and feels roughly as satisfying as licking a piece of paper.

Puzzles have a similar framework to previous games, usually requiring observation and logic to overcome. The problem is that the solutions are often ridiculously obscure. I spent a solid 80 minutes of my first 3 hours banging my head off anything hard enough to draw blood. For example, the very first puzzle is a simple enough question of disconnecting wires in the right order. But the first clue was right near the start of the level and I found it by pure luck after 20 minutes of trial and error insta-deaths. Even after I found it, I couldn’t work out the solution, so continued in the same vein until I solved it by the process of elimination. It was incredibly frustrating, and sadly indicative of what was to come.

I’d like to report that all the negative is balanced out somewhere, but that’s simply not the case. Sedna feels horribly under-cooked and ten years too late, failing to capture any of the franchise’s trademark atmosphere and instead settling for a woefully clumsy adventure that trips itself up at every turn. If you’re after a challenge, Sedna is certainly that, but for all the wrong reasons, and nobody is more sad about that than I am.

A tedious slog that sullies the legacy of its vaunted predecessors.

You may also like
Fear Effect Sednasquare enix collective