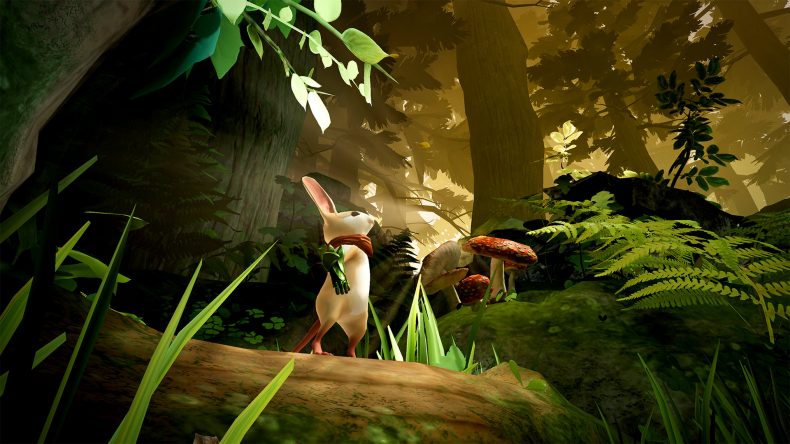 There’s a preconceived notion about VR’s value being in point-of-view, immersive experiences that offer a taste of the unreal. Admittedly it’s a fair expectation, but if the technology is to evolve further and reach a wider audience, it’s going to take new and clever ideas that offer more than first-person, 3D viewpoints.

And that’s why Moss, a fantasy adventure with a certain Studio Ghibli spirit about it, is such a breath of fresh air. Here, you aren’t the hero of the narrative, nor do you see events unfold in the first person (as with most VR games). Instead, you are the “Reader”, pawing through the pages of a magical tome and influencing the events contained within.

Your viewpoint is limited to single-screens of platform puzzling, with you directly controlling Quill (the heroine of this tale) via the analogue stick. Meanwhile, you have tactile control of various environmental elements through physically moving the DualShock 4 and grabbing onto items with the trigger buttons, while additional face buttons are also used to make Quill jump and attack. On paper, these multi-tasking controls sound confusing, but they’re just simplistic and responsive enough to become second nature, and it’s only the later areas where you’ll really need to juggle controlling Quill and moving blocks and gadgets with motion controls. Any issues relating to controls are usually down to the PSVR’s own limitations in terms of calibration, and the occasional need to have to physically move forward more than necessary. It’s not an issue exclusive to Moss, and I can’t fault it for that. But what makes Moss are its single-screen environments, which are presented as small-scale, almost diorama-like areas. As the Reader, you oversee these puzzle rooms as you can peer into every nook and cranny like you are looking into a dollhouse. Walls can be looked around, crevices can be peeked into and secret entrances can be searched for by just physically looking around. It’s a brilliant mechanic, that is unfortunately rarely used for any meaningful purpose, save for the very occasional hidden collectable. However, it does ensure that this is a VR game that relies on minimal physical movement, and therefore minimal motion sickness. Yet even though you’ll rarely need to, you won’t be able to help yourself from trying to look at these tiny environments, reminiscent of European fairy tales of old.

The singular quest is split into chapters and book-ended (ahem) by an illustrated story that you physically flick through by grabbing pages. It’s a classically written fairy-tale that’s excellently conveyed by one sole narrator who performs all the character’s voices, and it all comes together to create something that can be enjoyed by players young and old alike. There are a few moments explained in these illustrated segments that would honestly have been better if they had occurred in-game and controlled by the player, but it isn’t too much of a frustration.

Quill herself is a brilliantly charming heroine, too. You start to bond with her as you help her through this adventure to rescue her Uncle, and that’s mostly due to her body language and the way she moves. There’s an expressive personality here, and that goes a long way: there are even points when she’ll try and interact with you (tip: there’s a trophy for giving her a high-five, which is such a wonderful moment). It feels like she’s right there in front of you as a living being: you can pet her and everything. As the Reader, you aren’t entirely faceless either, as you occasionally check out your reflection in pools of water. As for the puzzles, they’re well-pitched in terms of difficulty. You’re never told explicitly what to do, but everything is set up in enough of an intuitive way to make it relatively easy to figure out what needs to be done to solve the puzzle and move onto the next one. There are some good little brainteasers here, especially if you’re looking to collect all of the hidden fragments. A handful of battles take place with several foes at a time, which also contributes somewhat towards the overall difficulty, although they are made easier once you realise that you can grab enemies and also heal yourself.

As creative and fun to play as Moss is, it comes with one considerable caveat: length. A single playthrough will take less than four hours, at which point (without spoiling too much) there is clearly more to this story as if the game wasn’t completed. Further volumes of this tale are clearly on the cards, but it seems like a bit of a cop-out for the game to end at a point when everything starts to kick into gear. Granted, it never outstays its welcome, but it also doesn’t feel like an entirely satisfying experience when the credits roll.

It could be argued that a game such as Moss could work without VR, and if I’m being honest, there is a lot of truth in that. But the addition of VR makes Moss that little bit more engaging, elevating this platform puzzler to something more and helping to bridge that gap between player and protagonist, which is something that so few games successfully realise, VR or otherwise.

Clever, different, but sadly all too brief. Moss might not be the singular game to justify the purchase of a PlayStation VR, but it is one of a growing number of PSVR releases that build up a decent list of reasons to pick one up.