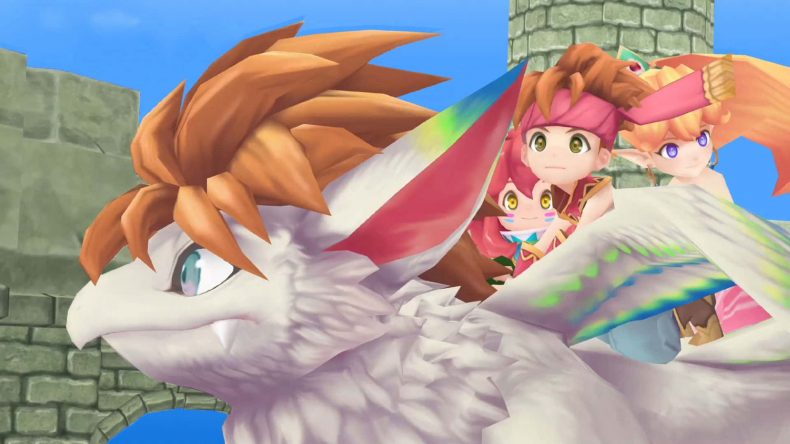 Remakes and remasters are big business now, refreshed games from our past given a fresh lick of paint and released for not only fans, but for those that missed it when the original came out. We’ve seen the entirety of Kingdom Hearts, the Metal Gear Solid series, Darksiders, and most recently a remake of Shadow of the Colossus.

The reason for this remake of Secret of Mana is a little bit odd though. It’s a game that’s twenty-five years old and yet, before this remake it’s seen releases on Wii, Wii U, 3DS, iOS, Android and PC so it’s not like people who want to play it don’t already have an avenue, and despite its status as a classic game it’s faults are well documented, so why when remaking the whole game haven’t they been fixed? Let’s get the basics out of the way, the aesthetic isn’t as bad as we initially feared. The character models for the protagonists are chunky, bright and well in keeping with the charm of the original; the NPCs and enemies, however, look considerably more basic. It’s a feeling that’s heightened when watching the cutscenes where in one of few changes to the game the camera makes use of the 3D environments and character models and takes up different angles, giving us a few close up glimpses. This serves to highlight how low poly the NPCs are and makes the voice acting seem more ridiculous because the mouths don’t move.

That’s right, there’s voice acting here and it’s…serviceable. At times it’s laughably bad, especially, once again in terms of the NPCs you encounter. Dialogue from incidental characters is delivered in a rote-like fashion and then there’s the shopkeepers who deliver their lines with all the enthusiasm of someone subjected to one of Arnold Rimmer’s slideshows all while dancing like they’re on MDMA. But, there are also the moments it’s really good, like when Randi, Popoi and Primm are having a discussion during a stay at an inn and it really feels natural, relaxed and like they’re enjoying this brief respite from their quest. Aside from those changes the game is very much as it was before; the structure, story, combat and UI layout is practically identical to what went before, but this adherence to the subject matter really does work against it. We take a lot of modern game design for granted these days, things like knowing what status changes will take place before you buy a new piece of armour for instance, or what an item like a medicinal herb or royal jam will do upon use. How about how many of an item you already hold before you buy it? This is all information withheld from you when making purchases at shops. Then there’s the really small icon that sits on top of a piece of equipment when someone is using it, unless you look closely you may miss it and wind up selling it like I did early on and I wound up wasting 500GP.

So, despite the freshened look it’s been given, the game is still completely archaic in terms of how it’s all put together, which in a way should give purists a little bit of pleasure; but in regard to what games are like now it just doesn’t feel right. If you’re going to remake a game you might as well actually make a few improvements to things while you go along, as well as what I’ve already mentioned Square Enix could have attempted to improve your ally AI as well. Granted, the idea is that you would adventure with friends, but when they’re not available the AI is in play and, frankly they’re not very good, always standing in the path of enemy attacks and as a result quick to die or constantly getting stuck on scenery because of their terrible pathfinding routines. Thankfully they reappear by your side should you transition to the next screen though. Just another thing about the new look though, as I said earlier, it isn’t that bad. Models are solid looking and there’s a good use of colour, the thing is it all still looks really basic, almost like an upscaled PS2 game. Then there’s the camera that feels a little bit too close to the action, I’d have really liked it if I could see more of the surrounding area on screen at once. I guess my camera issue is mitigated somewhat by the (admittedly lovely) 16bit mini-map in the top corner, but that’s not something I’m going to be looking at often in the middle of combat and then that really makes me wish the game had a proper overworld map with objective markers because it can be difficult to remember where places you’ve visited, or your current quest location is.

This all puts Secret of Mana in a very odd place in terms of who it’s aimed at; it’s not retro enough to please the enthusiasts and it’s too mechanically regressive to please newcomers. I mean, if you loved the original it’s pretty much the same game, just without the 16bit aesthetic, and if you can look past that then you’ll find the game you think of so affectionately. As for everyone else though, you’ll need to struggle through without many of the comforts you’re used to in games released these days. At the end of the day though, this has been treated with much more respect than another recently released old Squaresoft title, and for that the development team should feel good about themselves, it’s just a shame this isn’t quite as good as it could have been.

Caught right between a needed update and trying to strictly adhere to the original template, Secret of Mana doesn’t commit itself enough in either direction to justify owning it above any of the other versions.