previous
Total War: WARHAMMER II gets a new campaign pack on January 23 with Rise of the Tomb Kings
random
next
Noclip's new Horizon Zero Dawn documentary has just been released and it is great
0 comments 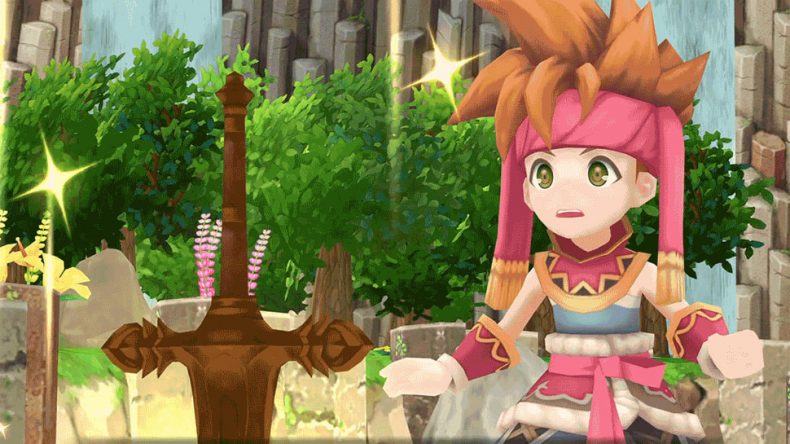 Come February we’ll be able to relive the joy that is Secret of Mana – one of the finest action RPGs of the SNES era. It’s a game that has definitely held up as time has passed as one of Square Enix’s (then just Square’s) best games – as it makes its way in full-on remake form to PS4, PS Vita and PC.

I mean, it’s a bit of an odd one seeing as the original game was one of the 21 titles on the SNES Mini, thus meaning folks like me who played it first time around and remembered it fondly will have played Secret of Mana just a few months before it’s re-released. It makes the argument for ‘why the hell wasn’t Chrono Trigger on there?’ all the stronger, but that’s another matter for another time.

The remake of Secret of Mana isn’t just a rezzed up version of the 1993 classic – we’re looking at brand new graphics and artwork in a fully 3D world, new music overseen by the original game’s composer, and voice acting throughout. Your mileage will vary on that latter part, and the look of things – a polygonial Saturday morning kids’ anime come to life – is sure to put some off, at least if you’re pining for the old game. But Secret of Mana plays just as it did 20-odd years ago (good god I’m old). It’s as instant and snappy as the OG RPG, with timing-based combat eschewing the turn-based approach kicking off almost as soon as you start the game, and the adventure kicking off mere minutes into things without much in the way of preamble. It just gets on with shit, and that’s a huge positive.

You are the hero of the piece, of course, a young boy named – well, whatever you want to call him, let’s go with Barry – who retrieves a magical sword from a lake. More of a pond, really, but you get the point. Monsters are unleashed, there’s some magical doo-dah going on, you get details from a grizzled veteran soldier called Gemma, and cannons are used to fire you around the map in a proto-fast travel mechanic that still makes me giggle.

Admittedly the animation from the original game where your tumbling potential corpse flew over the world map wasn’t in the preview version, thus removing much of the joy from cannon travel, but I’m hopeful it’ll be in the finished version. Secret of Mana’s remake has such a superb foundation on which to build upon, it’s going to be almost impossible for it to be a bad game. There may be some issues – lacking cannon animation notwithstanding – as combat can sometimes feel stilted, with enemies not reacting to blows for a good second or two after they connect, as well as the aforementioned presentational aspects – though they’re purely a taste issue.

But barring some thunderous fault that melts down your PS4, Vita or PC, Secret of Mana will be guaranteed good fun, because it’s a straight remake of a good fun RPG that has held up over time. Additional elements like multiplayer – local only, and unlikely to change there – are welcome, allowing you to team up with others and play through the game as normal, just with other real people in the party.

I had a quick go on that, having never played multiplayer on the original game thanks to the fact I’m woefully unpopular, and am happy to report it’s fun. It’s not invasive, the game itself doesn’t change in any way and it actually opens up much more tactical approaches to combat throughout, with planning and timing making more of an impact. It’s better than your AI-controlled teammates just running into enemies until they die, basically. There isn’t much more that can be said about the Secret of Mana remake – it’s a fantastic original game, it’s being remade without major changes to the mechanics, the look might put some off, and multiplayer is welcome though nothing much more than an aside. It’ll be good, I’m sure.

One area where I’m certain Secret of Mana’s remake will outdo the SNES original, though, is in portability – at least with the PS Vita version. This is a game that’s perfect for playing on the go, and the ability to dip in and out over a period of however long a commute is these days (says the man who works from home) is very welcome. It also bodes well for the inevitable Switch release later in 2018, which is something I’m entirely speculating about but am 100% confident will happen.