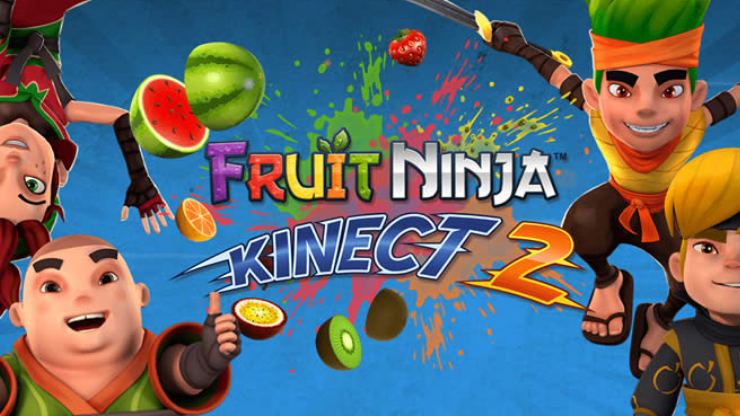 Given how central the Kinect 2.0 was to Microsoft’s vision for the Xbox One platform, there have been surprisingly few games that use the camera peripheral to its full capabilities. Short of a few token voice gestures thrown into cross-platform titles, the Kinect has been overlooked by developers for the most part. Halfbrick (Jetpack Joyride) are keen to put that right it seems, with the release of a follow up to their first Fruit Ninja Kinect title, which debuted on Xbox 360 and used the first iteration of the Kinect sensor. Fruit Ninja Kinect 2 uses Kinect 2.0, and promises a better experience from top to bottom than its predecessor.

Fruit Ninja was a runaway hit on smart devices, first gaining mass attention in 2011 when Fruit Ninja landed on iOS. The basic premise behind it is to perform a swiping motion with a finger, or in this case your hands, to slice various fruit that dances around the screen. It is a simple concept, but one that did just enough to become a therapeutic pick up and play for millions of smartphone users. The Kinect, then, offers a great way for developer Halfbrick to bring the Fruit Ninja formula into the living room so the whole family can get involved. Two players can smash fruit to bits simultaneously, and I found the motion detection to be impeccable with one or two players taking part. It really is impressive to see how accurately the Kinect folows hand movements and converts them into actions on screen. None of that pick up and play charm is lost here, and it was a matter of seconds before I was screaming ninja noises at the top of my lungs and upsetting the neighbours as my limbs flailed around frantically. There are 3 “classic” modes which I recommend you spend most of your time with if you have a smaller living room. These modes (Zen, Arcade and Classic) offer up the same gameplay and rules you will have seen in other versions of Fruit Ninja – essentially variations on times, limited lives and speed. The developers have mixed things up a tad by including four “special” modes, each of which throws a different challenge at you. One tasks you with dodging ninja throwing stars while simultaneously slashing at fruit. Another sees you dodging spotlights, while slashing away at fruit. Get the picture? Its basically dodging stuff while slicing stuff up. I found the special modes to be nigh on impossible in my little apartment living room, but those of you with more generous sized rooms may get more out of them.

Leaderboards, unlockables and in-game purchases aim to keep players interested beyond the initial “Ooh, shiny” phase. I recommend picking up the Fire Blade add on first, as being able to unleash fiery death on poor unsuspecting fruit is a pleasure that really cannot be oversold. There is fun to be had with Fruit Ninja Kinect 2, particularly if you have someone to play with, or people over to visit. I can see it being quite the party pleaser. Is there enough here to keep anyone over 10 years old coming back time and time again? Probably not, but what’s here is polished, well-presented apples and bananas fun.

Not much to bring players back
Expectedly shallow

A solid enough party game that does little to encourage solo play.

The Gunstringer And Fruit Ninja Kinect Getting Released As A Bundle