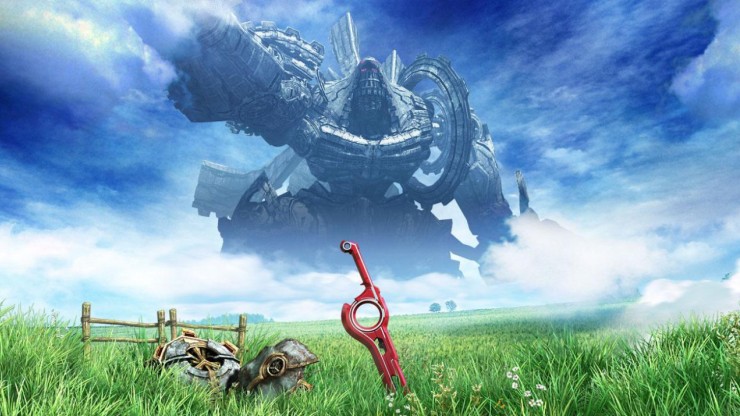 A Ghostbusters sequel being as good as the originals. The cupboard being a better storage location for ketchup. Nintendo releasing three JRPGs in Europe before North America, late in a home system’s lifespan. These are all statistical improbabilities that are absolutely 99% unlikely to happen.

But between 2011-12, that last scenario happened. A trifecta of roleplaying titles hit our shores: The Last Story, Pandora’s Tower and Xenoblade Chronicles. It’s the latter that appears to have firmly dug its way into the hearts of those who played it, standing up as an excellent JRPG that would be welcome on any system. In a genre that regularly struggles to maintain the balance between old and new gameplay conventions and mechanics, this was a game that offered the best of all worlds. We could have a slice of Monolith Soft’s cake, and indeed eat it, savouring every morsel. And while fans of the original are waiting for their second helping in the form of the Wii U’s Xenoblade Chronicles X, Monster Games have cooked up a fresh batch of the original recipe, and shrunk it down for those with a more portable appetite. As the very first New 3DS-only release, the team behind Donkey Kong Country Returns 3D has used the updated system’s increased power to somehow squeeze the entire Wii game onto the smaller screen. As I’ll come to in a moment, there are minor sacrifices, but this is an impressive technological achievement.

In a world that is literally built on the shoulders of giants (in particular, a long-dormant giant upon which an entire civilisation lives), so begins a tale set around that most traditional of fantasy macguffins: a sword. As is tradition, the Monado is a weapon of great power, but one that only the worthy can use and, of course, a young hero is that chosen soul. Yes, this is a premise that admittedly wore out its welcome long ago, but you’ll honestly struggle to find it told better elsewhere, thanks to some excellent localisation.

The game itself is practically MMO-like in terms of mechanics and scale. The world you are placed in is vast, with many a nook and/or cranny to explore for an almost endless array of trinkets, collectables and doohickeys. In these gargantuan areas there are absolutely no random battles, just a selection of fierce beasts and docile wildlife to kill or be killed by – some ignore you unless you strike first, others will attack if you they hear or see you. Useful icons above each one will instantly tell you whether or not you’re hard enough to take them on, helping you make the decision on whether or not they’re worth the XP. Be careful though, there are some truly massive creatures out there that will happily decimate you with one mighty swipe. But combat is eventually unavoidable, and here it involves one of the better JRPG systems in recent memory. Your party of three will attack automatically with normal attacks, but playing as the lead member of the party, you’ll have access to several Arts, special attacks that have have a cooldown time after use, but are more powerful and have their own unique attributes. Some of these Arts can inflict various status effects to make tougher enemies fall quicker, while others are affected by your attack positioning. During battle you have free movement within the vicinity, and some attacks are more effective when used to hit enemies from behind or to the side. Some attacks will also inflict further negative status effects if an enemy is already affected by other effects. Between your combat party of three, there are some excellent opportunities for strategic play, thanks to some very simple to understand mechanics that are explained throughout the game with static tutorial screens accessible at any time.

What is also unique about Xenoblade Chronicles’ approach to combat is that there is no such thing as a Game Over screen. There is a bar consisting of three segments – when filled up, this entire bar can be expended to unleash a chain attack from all three party members, where you can select a chain of Arts between your entire party. However, if the CPU-controller party members die, so long as you have one filled segment, you can revive them. Alternatively, if your party leader dies and you have a filled segment, you will be automatically revived yourself. Without a segment filled, death to the party member means you are just taken back to the nearest environmental landmark that was discovered, without any penalty whatsoever. It’s an unusual but excellent mechanic, removing a usually frustrating point in JRPGs. Without a penalty upon death, you can quickly get back into the action, grinding if necessary to get revenge on your aggressor. Battles are still tough, with even the smallest of minions able to slay you, especially when swarms of lower levelled enemies cross your path. But without the worry of losing minutes/hours of progress, the result is an adventure that is friendlier and more enjoyable. Outside of battle there’s also a ton of content, with masses of items to collect, Arts to level up, extra story events to see and side-quests to finish. Even without these distractions, the main story is still over 40-50 hours of solid gameplay, so you really do get a lot of bang for your buck. Endeavoring to see everything Xenoblade Chronicles has to see is no small feat, but money and other spoils await those who are willing to stray from the beaten path. But for those who just want to stick to the journey, you never feel like you’re missing enough to have a negative effect to your enjoyment of the game. Besides, there’s always the New Game+ mode to go through the game again and see what you missed…

As for presentation, you would imagine that translating a game from a dual-layered Wii DVD to a tiny 3DS cartridge would end in disaster. That is not the case here, with a port that retains a steady framerate and draw distance, while still looking very favourable when compared to other 3DS games. This was never the best-looking game in the first place, clearly held back by the standard definition limitations of the Wii, but in terms of visuals, there’s little to be worried about, and the 3D certainly brings a literal depth to each moment. Then there’s the soundtrack, a lavish collection of pieces from a who’s who of Japanese composers that matches the game’s impressive scale. There is a slight loss of fidelity here, but it’s quickly forgotten about as your ears submit to the absolutely fantastic series of compositions. The same loss of fidelity is also apparent for the insane amount of spoken dialogue – although the Japanese voice track has been removed for this version, which may disappoint some. As it stands, the spoken dialogue has a certain charm, thanks to the use of various Southern English dialects. While it’s not exactly a masterclass of voice acting, the fact that it’s something a little different from your average trope-heavy JRPG cast makes for far more interesting dialogue. Characters will even chat to each other, mid-battle, and while there does become a point very quickly where these quips start to cycle, it at least brings a sense of connection between your party.

In terms of sacrifices, there’s barely anything drastically missing that hasn’t already been mentioned in this review. Whether or not this is the definitive edition of Xenoblade Chronicles, is extremely tough to call. If you already own the original Wii edition, then this is essentially the same game, but for there to be so much parity between the two versions is a marvel in itself. Yet, much like many other games of the genre, this is a game that works spectacularly as a portable experience, to be enjoyed whenever, wherever. If you are lucky enough to own a New Nintendo 3DS, this is the best way to show off its new features – alas, thanks to the typical amiibo shortages, I was unable to obtain a Shulk figure in order to see what benefits it could bring.

With Xenoblade Chronicles X on the way to the Wii U at some point, this is an excellent excuse to indulge in a truly enjoyable and accessible JRPG that ranks as one of the best modern examples of the genre.

An excellent port of a much-loved Wii classic.