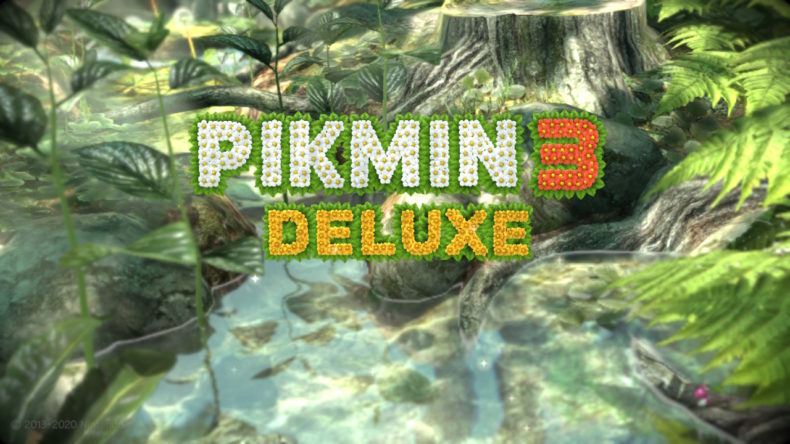 There have been a few “Deluxe” versions of WiiU titles that have come to Switch. We’ve had the lovely New Super Mario Bros. U Deluxe, and of course the amazing Mario Kart 8 Deluxe too. So Pikmin 3 Deluxe is in good company. And what has made these Deluxe versions so successful in the past is they take a pretty stellar original and then add to it to make an irresistible, unmissable complete package. Thankfully that’s exactly what Nintendo has done again with Pikmin 3 Deluxe, and Switch owners should be very happy indeed.

For those who didn’t play the original Pikmin 3 on WiiU, the main story is largely unchanged. A crew of three adventurers have gone on an interstellar journey looking for a food supply that they can bring back to their starved planet. They crash-land on a planet they dub the catchy PNF-404 and are scattered across it. They must find each other, food, and repair the ship to successfully return home. You stumble across the indigenous Pikmin who follow you around and do your bidding unperturbed. You can command them to collect items and food, attack barriers, and even lay waste to dangerous monsters you’ll encounter along the way.

The big change in the Deluxe version though is the introduction of a local multiplayer mode. As well as help from Pikmin, a fellow player can pick up a controller and join you in your quest for survival. Thankfully this isn’t asymmetrical multiplayer, like say Super Mario Galaxy, no, in Pikmin 3 Deluxe, you each control an independent crew member and you each have the same abilities at your disposal. The screen is split vertically, and you each have free reign over your own camera too. Story beats don’t even lockout multiplayer either, so even if there was only meant to be one crew member available at a certain point in the story, two of you can still play, each controlling separate versions of that character. That means no one has to sit out, and there’s no awkward silences or tantrums in the living room. 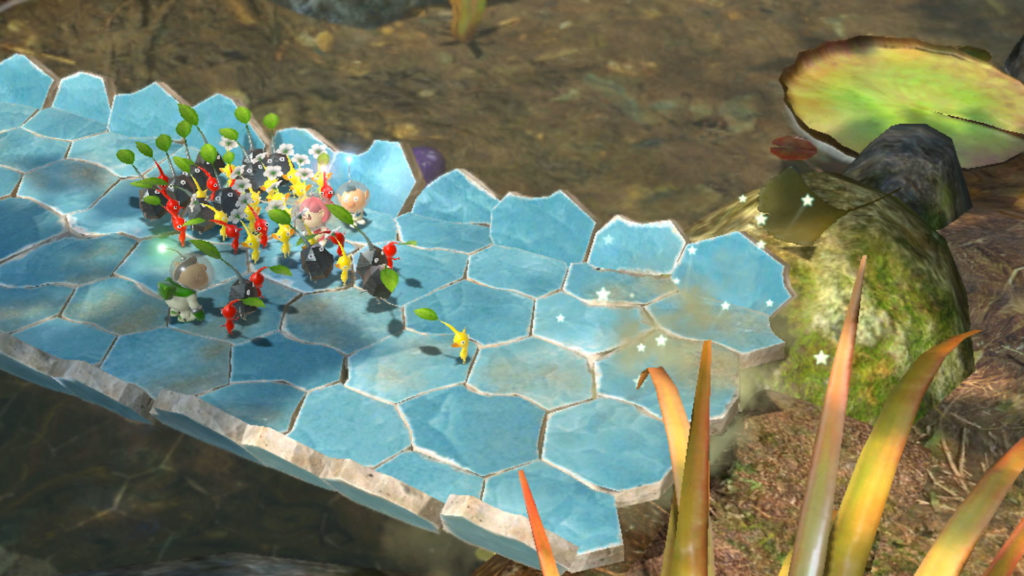 Pikmin 3 has always been equal parts exploration, discovery, and strategy. Your aim each day is to further explore the planet to continue your quest to get back home. But each night, you’ll consume food, so you’ll also need to be bringing back enough fruit within the daily cycle to ensure your crew can be well fed. This often means making tactical decisions about what to do each day. Do you spend time working towards a new piece of fruit, or work to destroy that barrier that is blocking your path to a new area? You’ll also be splitting the allotted 100 Pikmin between you too, requiring further judgment calls.

Whilst these decisions clearly still exist, playing in co-op does allow for much more structured and efficient planning. Just by having two of you beavering away at things naturally means you’ll get more done. But by being local multiplayer, it allows you to plan by verbally agreeing the plan of attack upfront, further increasing your effectiveness. This provides a real sense of teamwork; cooperative play in its purest form. You’re both working together, sometimes literally helping each other out to achieve a common goal, and it works really well. Considering the game itself is built originally as a solitary experience, it is surprising how strong the cooperative element is, feeling completely at home on Pikmin 3 Deluxe.

There were a few multiplayer niggles, which I’ll address early. For starters, the map orientation changes depending on which way your character is facing. It gets even more confusing when a second player looks at their map, and it has rotated again because they are facing a completely different direction. A fixed perspective map would have been less disorientating. Also for some reason, all Pikmin from both players’ squads are given to one player at the start of a Boss Battle, meaning often a frantic redistribution is required before the assault can happen in earnest. There are also sections from Pikmin 3 which required all three crew members to be used to solve certain puzzles. These still exist but can only be completed by a single player, meaning occasionally someone is left waiting around whilst the other finishes off that section, and opens up a way for the two players to be reunited. 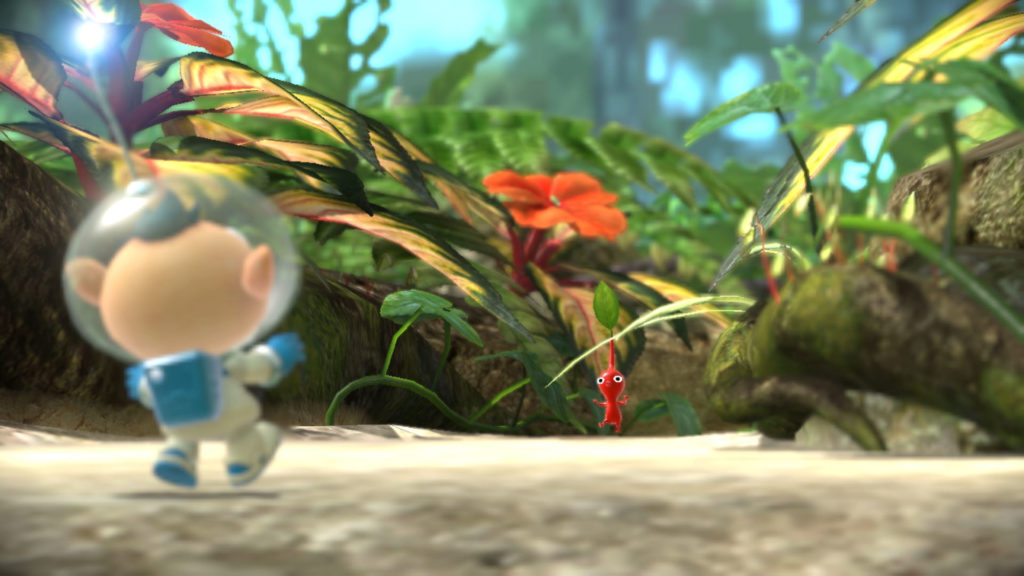 But to be clear, these are minor, minor gripes throughout an adventure that despite those niggles was otherwise incredibly enjoyable throughout. When my wife is asking me “Can we play Pikmin again tonight?”, there’s clearly a magic there that cannot be ignored. Not to say my wife doesn’t enjoy games, no indeed right now she’s on her hundredth playthrough of Fallout 4. It’s just that normally she prefers those single-player experiences, and could do without me sticking my nose in whilst she’s kicking a Deathclaw’s arse. So for her to be choosing a co-op experience over that is a pretty good indicator that the multiplayer in Pikmin 3 Deluxe is enjoyable and accessible.

The elephant in the room though, is that despite how wonderfully balanced and designed Pikmin 3 Deluxe is, being able to work cooperatively does make it an easier experience overall. You’ll find yourself achieving more each day, and as such clearing the various chapters of the Story in less time than in the WiiU original. My wife and I finished the main story in 9 hours compared to the original’s run time of up to 15 hours, showcasing the increased efficiency of that second player. To combat this, Nintendo has added additional difficulty modes for you to try which will naturally lengthen your journey, either by toughening up enemies or by reducing the amount of Pikmin at your disposal. For those looking for an additional helping hand, there’s also a Hint system that clearly lays out your next objective if you’ve missed it. In reality, there’s a difficulty setting for everyone in Pikmin 3 Deluxe, and that’s lovely to see. It means people can experience the level of challenge they want, and it is inclusive to everyone.

On top of that, there’s additional content to delve into as well. All the DLC missions are back allowing you to solo or coop various challenges to try and earn medals depending on your score. You’re tasked with either collecting coins, killing enemies, or tackling bosses you’ve uncovered in Story Mode. They’re a nice alternative to the ongoing story, with each one lasting a few minutes, if you want a change of scene from your current objective in Story Mode, and they get pretty tricky in the later ones too. Bingo Battle, a quirky competitive multiplayer mode where you compete against a friend to fill your Pikmin-themed bingo card, is back. It is fun but it’s unlikely to be your main multiplayer focus, given the other coop options now available. The new content is the Side Missions which run alongside the main story. Whilst the gameplay premise is similar, the new missions are entertaining and work well as an alternative to your main crew’s progress. 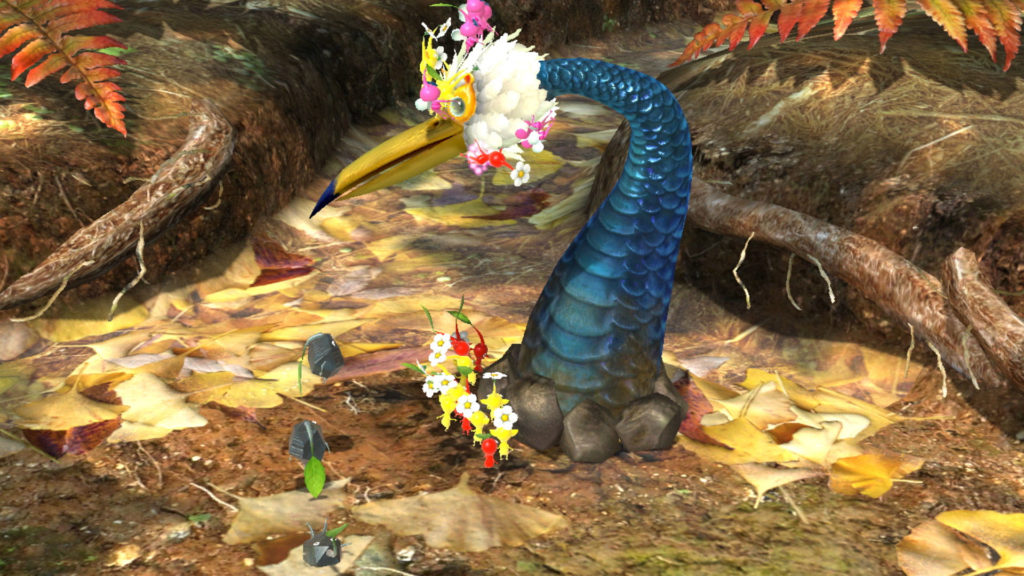 There’s something so undeniably lovable about Pikmin 3 Deluxe. The core from the WiiU original is still present from the gorgeous, ambient soundtrack, to the clever interwoven level design, right down to the Pikmin themselves who you just want to gather together and give a great big hug to. It looks lovely as well with decent textures, and nice lighting and water effects. It feels so natural, earthy, and wholesome it’s very hard not to fall in love. And now you can experience the whole adventure with another person too. But that multiplayer element doesn’t feel tacked on, it’s a considered addition that works really well and promotes a cooperative ethos that feels so in keeping with the joyful, optimistic nature of the game before you. This has that quintessential Nintendo charm in droves.

Map screen can be occasionally confusing

Pikmin 3 Deluxe has blossomed on Nintendo Switch into the complete package. With excellent coop and bags of content, it's an experience not to be missed.