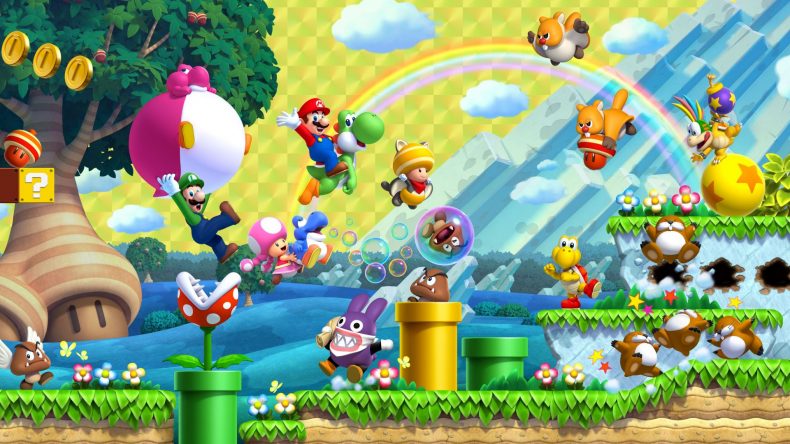 Much of what I said in the New Super Mario Bros. U (NSMBU) review could be rehashed for the Deluxe edition for Switch. November 2012 seems a long time ago, and my main memory of that era is in fact playing Super Mario 3D World over Christmas in 2013 instead; it being the better game.

In fact, after Odyssey, I’m left questioning if I prefer 3D or 2D Mario games. World on SNES is one of my favourite games of all time, but Odyssey rivals it, and in all honesty it feels strange for Nintendo to be bringing NSMBU to Switch instead of 3D world or, let’s be honest, Galaxy (which feels so long overdue now, that it likely isn’t going to happen).

I’m stalling, I suppose, but 2018 saw yet more Wii U games come to Switch, some more enhanced than others. It’s a chance to remind you of some great games, but also one to lament Mario Maker’s continued exclusion from the Switch. Anyway, Smash Ultimate proved that, despite it initially being thought of as a “port”, it warranted its hype and was a new game entirely; Toad’s Treasure Tracker was pretty much a straight-up port, while Donkey Kong Country: Tropical Freeze was a port with a few enhancements to difficulty, which is where NSMBU Deluxe sits, too. It’s the same game, then, but with the ultra hard New Super Luigi U bundled in and two new characters which, similar to Donkey Kong, are there to make a hard game easier. It’s perhaps strange to hear this, but for those who missed NSMBU (and judging by Wii U sales, there’s a lot of you), it’s a tough game. It starts in an innocuous enough manner: Peach is kidnapped by Bowser in a thankfully very short scene, and a tree is disturbed releasing angry looking squirrels who bring with them a new suit that lets you cling to walls, thrust upwards when descending, and glide after jumping with a slow fall speed. The Ice Flower returns from NSMB Wii, as does the Penguin Suit, but the Super Acorn is the main draw, here.

Of course, Mario games have always had tricky sections and a naturally upward progression is the key to how many games keep you coming back for more. If you could breeze through them, a large part of the audience would get bored early doors. But NSMBU (and thus Deluxe) will give you a few courses before it starts kicking your ass.

The new playable characters, while not quite the all-encompassing accessibility options of, say, Celeste, do offer a chance for people to experience more of the game without the frustration that the precise platforming demands. Toadette is the best middle ground option, because with her comes another new power-up in the form of the Super Crown. Grabbing this (and only she can use it) turns her into Peachette, which is to say, Peach by way of Toadette. She can then float and gains a huge double jump similar to the squirrel suit. It makes her very comfortable moving around in the air, and offers an option to save her when you’re falling to an otherwise certain death. There are other tweaks with Toadette, too, such as 1up mushrooms from blocks being 3up moons, instead. Nabbit is playable too in Mario U (previously only Luigi U), and is invincible. He can now hold items, but these are changes that, frankly, only people who studied the original game very closely will notice. Likewise, I wonder if people replaying it on Switch (if indeed there are many) will notice that you can pick any character in single player for the two included games. But you can, so there.

Multiplayer remains chaotic fun, and the opportunity to “bubble” yourself at any point means that an inexperienced player can “bubble” up to avoid ruining other people’s fun, but the real draw of the multiplayer is how ridiculous it is. You’ll quickly learn you can jump on one another’s head and be boosted up higher to grab things you wouldn’t be able to, at least not easily, when playing solo. Rounding off the title are various speed-runner like challenges that are re-purposed course maps with medals awarded for speed. These are tremendous fun, and require repeat play before you find your best route. Sliding under enemies and making minute jumps to best your time is rewarding, but it’s a real shame there’s no online leaderboards, perhaps with a ghost mode to study the very best out there. And that’s about it, really. I won’t bemoan there being no “online” option for the campaign (it wasn’t there to begin with, but adding it would have been a lot of work, I’m sure), and while some form of leaderboards would have been nice (this game has an active community trying to beat it in new, interesting ways), I didn’t expect it after seeing Donkey Kong’s Switch outing.

What you’re left with is the best, most accessible version of a very good 2D Mario platformer that runs in 1080p on your TV that is most likely something you’ll be interested in if you missed the original game. There’s simply not enough here for returning players unless you are heavily invested in this particular game.

But for newcomers who haven’t experienced it? Well, it’s been a while since a new 2D Mario game came out, and this is still a very good game that has aged well. NSMBU Deluxe is a worthy addition to the ever growing list of Wii U games now on Switch, but really, Nintendo, it’s time for everyone’s favourite plumber to start creating levels on the console again.

For newcomers who haven’t experienced it, this is still a very good game; one that’s aged well. But for returning players, there just isn't quite enough to warrant another go.

You may also like
new super mario bros u deluxenintendo