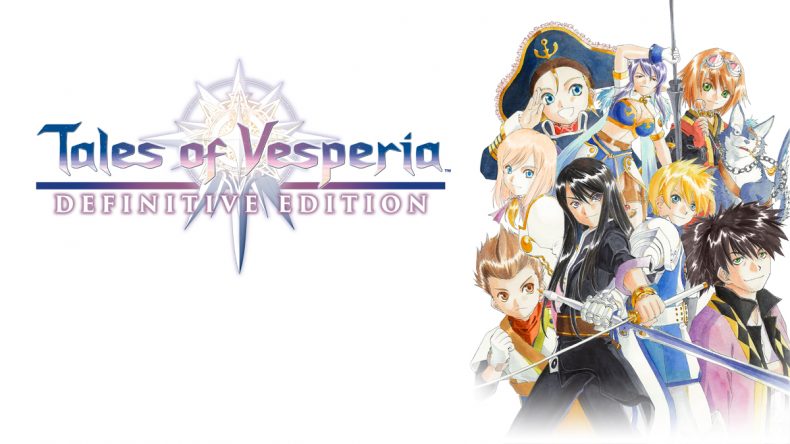 Hello everyone and welcome to 2019, it’s a new year and you know what that means: new games. Well, except this one, which is in fact ten years old. Yes, a game that looks this darn pretty is essentially two console generations old despite the fact it was only originally released on last generation hardware; we were warned that this generation would be longer than previous ones.

The fact that Tales of Vesperia is as good looking as it is is testament to good art design. Such a thing creates a timeless look, and despite the game’s creaking battle mechanics, outdated slash guitar riffs and incredibly trope-laden cast, its looks still hold it up as a quite lovely looking game. In battle and cutscenes the animation is superb and while the monsters are for the most part pallets-swaps they never cease to look great. If only everything else could have held up as well. The game sounds pretty good, too. You have to remember that this is based on the PS3 port of the Xbox 360 game, and as such contains considerably more spoken dialogue than the original did, as well as extra characters. That’s not to say all dialogue is spoken, there’s still a considerable amount of non-speaking parts of discussion with NPCs, which certainly isn’t a terrible thing considering most additional discussion is optional. With regards to the main cast is at least voiced superbly, with perennial voice actor Troy Baker as the game’s protagonist Yuri Lowell giving the obsidian haired surly bastard at least a semblance of a personality.

Where the voice work shine though is within the skits. Frequently there’ll be a button prompt in the bottom left corner of the screen, hitting this will bring up a few of the cast in Brady Bunch style squares in which they’ll have a discussion. These moments can be funny, touching or just generally offer more of an insight into a character’s back story or how they’re feeling about their journey. The heads themselves are animated, but sometimes the squares are too, and while they may judder around rather than move smoothly from point to point, it does a very effective job of communicating what the characters are doing during the discussion without the aid of a fully rendered cutscene. Not bad for continuously reused animation. There’s obviously so much you can ask your voice actors to do though, and in a game that lasts tens of hours you’re definitely going to hear certain sound hits repeated. Having characters calling out their special moves is a very shonen-like thing to do, but having characters belting these things out repeatedly as part of the battles grows repetitive and irritating before long; that’s on top of the post-battle celebration banter while you watch XP and items tot up. The battle music as well should get a mention for how annoying it is. Granted there’s nothing wrong with a guitar theme, but after hundreds of battles it wears a little thin, Hell, I might never listen to Dragonforce ever again as a result. That’s not to say it’s all bad though, as the overworld music does a nice job of making it feel like a grand world whenever you’re roaming it, and the towns all have their own distinct flavour to set the atmosphere.

It’s funny that pretty much all of the worst things Tales of Vesperia does are within the game’s battles, which for a JRPG should be the game’s bread and butter. In Vesperia the battle system is kind of played out like an RPG and fighting game hybrid. You’ll control Yuri while the AI handles your three compatriots, but according to the rules you tell them to, such as to save TP (the game’s version of mana) or to hang back while you attack. On PS4 you’ll attack using the circle button while Cross with a direction stick input will perform one of Yuri’s Artes (a special move that uses TP), while you can block with Square, change targets with R1 and move about freely with L2. So far so good. The thing with the controls is that there does seem to be a slight lag between a button press and the action happening, and Yuri can find himself on the receiving end of a multitude of attacks while you desperately hold Square for him to block and wait for the animation to actually occur. There’s also this weird thing where touching an enemy while exploring obviously initiates a fight, but it takes so long to actually happen. You’ll walk into them, the screen will crack and there’ll be a significant pause while the game calculated if there are other alerted enemies in the vicinity to join in (what the game calls an encounter link). That pause is so incredibly jarring, and then there’s the little finger gun thing you get in the game’s first proper dungeon, which not only looks pathetic, but it’s your only avenue for a pre-emptive strike, and it’s very rarely successful.

Then there’s the AI, who even on regular foes are desperate to use their special skills and as a result waste their TP. From this they’ll then try and constantly use your rather limited selection of items (a maximum of fifteen for anything) to replenish it. You can cancel their item usage by pressing the right stick down before they use the item, but there’ll be many occasions where you’ll not notice until it’s too late. There is the aforementioned ‘save TP’ order, but they wind up taking this so literally that you can find yourself desperately needing to heal because Estellise seems to lack the idea that saving TP does not necessarily mean that Yuri has to die. There are at least several facets to the battle system that make it worth persevering with. Chaining together regular attacks and Artes means you can build up a combo, which means major damage without the enemy being about to retaliate. After a short time Yuri learns the ‘Over-limit’ which allows him to string together Artes allowing himself to build up large combos providing you can remember which of them hit multiple times. There’s more as well, with items providing characters with new skills and as a result increasing their battle efficiency and survivability, this means it doesn’t always pay to swap character weapons out for better ones, at least until they’ve learned the skills from them first.

The story is good too, despite the usual surly young man in the protagonist role, as well as the tomboy, the lovable rogue, the stoic sensible one, the overly likeable person of obviously high lineage, and the usual backing cast that generally comes with this type of game. Tales of Vesperia tells a compelling tale of corrupt government officials, the rebirth of lost civilisations and long dormant world-ending monsters. Friendships are tested, treachery abounds and people leave the party and come back regularly; it may not be incredibly original, but the work of the voice actors does at least ensure the main cast has enough charm to see you through.

At the beginning of a new year you need to ask yourself if you should look back at what has gone before, or ahead to a bright new future, the thing is, we’re in a generation where companies bring out remasters because they’re easy ways to fill in the gaps in release schedules giving players something while also generating more revenue for new projects. Tales of Vesperia is 10-years old, and feels exactly as you’d expect a game that old would do. It’s pretty and it’s got a considerable amount of charm, but in this day and age it doesn’t sit as comfortably at the party as it probably wishes it could.

Fitting for a game called ‘Tales’ Vesperia spins a good yarn, but ultimately the game is showing its age.

You may also like
Bandai Namcotales of vesperia: definitive editionPC