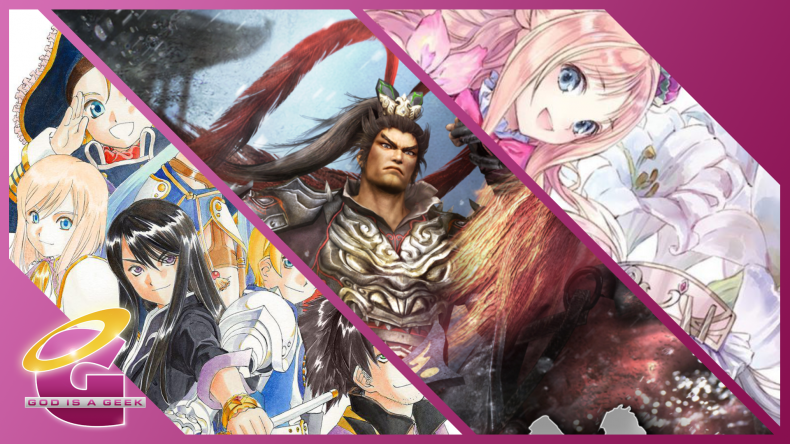 The first Switch Re:Port Review of the year has some heavy hitters. Over the last few weeks, I’ve been playing a ton on Switch and I’m super pleased to see 2 more of my most wanted ports get announced over the last few days. This Re:Port Review features the Switch port of the highly anticipated Tales of Vesperia: Definitive Edition, a trio of Atelier games in a single lovely package, yet another Dynasty Warriors 8 port (this one is actually super), and an interesting simulation game I’ve been playing on and off over the last few months.

Simultaneously released on Xbox One, PS4, Switch, and PC and scored 7/10 on PS4 Having played a few recent games in the Tales of franchise and adoring Tales of Berseria, I was pretty excited to eventually play Tales of Vesperia when it would hit Xbox Backward Compatibility. I had a copy ready for whenever Bandai Namco Entertainment would flip the Switch but things played out a bit differently. The Xbox 360 exclusive (in the West) Tales of release that has a big following got announced to see a port across all consoles at E3 this year in the form of Tales of Vesperia: Definitive Edition and it happened to also arrive for the Switch.

Tales of Vesperia: Definitive Edition arrives a decade after the original debuted on Xbox 360 bringing all the PS3 content like much more voice acting, new party members, and a lot more. While originally thought to run at 1080p 30fps outside battles and 1080p 60fps in battles docked (with 720p and the same framerates in portable), the end result is quite different as of version 1.01. There are many areas outside battle where the game targets 60fps on Switch. Battles target 60fps and drop here and there but it isn’t ever really bad. The locations where the target is 30fps however have issues. Some locations in general suffer from bad framepacing and end up feeling bad in general. It isn’t a steady 30fps across the board for sure. On the portable side, the image quality is quite soft in many areas. The art style can carry the game but don’t expect a crisp image at all times or rock solid performance sadly. It is pretty jarring when some areas in a town are 60fps while others like the outer area is 30fps with switching between them.

When it comes to using Switch specific features, Vesperia supports video capture, has decent HD Rumble, and also has Save Data Cloud Backup. There sadly is no use for the touchscreen.

If you want to play Vesperia on a portable, this is your only option. It isn’t a fantastic experience but hopefully post launch patches improve the visuals and the framerate. If you want to play this docked, get it on another platform. The Xbox One X version I played alongside the Switch release is so much better on TV visually and performance wise. I’m glad to finally be able to check this great Tales of release out and for the option to play it on a portable but this needs some work before it is an essential on the Switch. While I don’t think Vesperia is as fantastic as Berseria, it is a damn fine Tales of game and one you need to play somewhere for sure.

Simultaneously released on PS4, Switch, and PC and scored 8/10 on PS4 The Atelier Arland Series Deluxe Pack includes all three games from the Atelier Arland trilogy. These are Atelier Rorona: The Alchemists of Arland DX, Atelier Totori: The Adventurer of Arland DX, and Atelier Meruru: The Apprentice of Arland DX. These DX versions are based on the Vita “Plus” releases. While Atelier Lydie had a massive difference visually and in performance on PS4 and Switch, these three games are basically nearly the same on both with a few issues on both platforms.

On the Switch, the three games run decently and look very nice. They definitely aren’t just the Vita versions running at a higher resolution because many of the assets have been improved just like the PS4 release. Given the framerate target on PS4 Pro, PS4, and Switch are all 30fps, it makes more sense to get these games on Switch since you can play them in portable mode as well and the Atelier games play best on a portable given their gameplay style. The Switch version has a few areas with slowdown but nothing major. The biggest annoyance is how the save data screen has quite a bit of lag in scrolling and in detecting inputs. This isn’t an issue on PS4. When it comes to using Switch specific featues, I’m glad to see video capture supported alongside Save Data Cloud Backup. There sadly is no use for the touchscreen here even for menus.

While these ports should definitely have been handled with more care, the Deluxe Pack brings 3 fantastic Atelier games into a single discounted package. Each game should’ve cost less individually but the overall package with all three is definitely worth looking into if you’ve ever wanted to get into the Atelier franchise. I’m glad that the series is on a portable that more people own and one that has the potential to make the series finally have a breakout hit in the West.

Originally released through multiple ports on PS4, PS Vita, and PC and scored 8/10 DYNASTY WARRIORS 8: Xtreme Legends Definitive Edition is yet another release of Dynasty Warriors 8 and while you probably own it on some platform assuming you’re a fan of the Warriors games, there are many reasons why the Switch version is well worth your time.

Having played Dynasty Warriors 8 on both PS4 and Vita, the Switch version is definitely my new goto version of the game. I used to laugh at how the PS4 release was called “complete edition” and there still was loads of DLC to buy. It is good to see the Switch version actually have a ton of content and be priced very reasonably. The Switch release has no extra paid DLC and both runs and looks a lot better than Warriors Orochi 4. That game feels like it was built for PS4 and Xbox One before being scaled for the other releases given the visuals and performance on Switch. Thankfully, Dynasty Warriors 8 wasn’t a current generation only title and there are many less powerful platforms that run it and this likely allowed for a very nicely performing and looking port compared to other Warriors games on the Switch. It does have some noticeable visual pop in. It supports video capture and the save data cloud backup service as well.

One interesting thing to note is the game detects save data from other Warriors releases and even had localised names for games like Dynasty Warriors 8 Empires and Warriors Orochi 3 for Switch that haven’t even been announced for a localised release. I hope they eventually see English releases but this is either a hint at what is to come or just Koei Tecmo being nice to fans who import Warriors games.

If you’ve never played Dynasty Warriors 8 before, this release is absolutely a must buy if you enjoy the Warriors games. If you’ve never played a Warriors game before, look into Fire Emblem Warriors or Hyrule Warriors Definitive Edition. While those two games are overflowing with superb content, DYNASTY WARRIORS 8: Xtreme Legends Definitive Edition is the first non Nintendo Warriors release that is an easy recommendation for me not only for the great content but also in terms of how good it plays on the Switch.

Originally released on PC, PS4, Xbox One, and mobile platforms Jutsu Games’ 911 Operator is an interesting take on the simulation genre. You play as a telephone operator sorting out emergency situations and also decide what department addresses what emergency. 911 Operator was a Kickstarter project for PC platforms before hitting both home consoles a year after and eventually mobile.

A game like this feels like it would benefit from precision controls and multiple keyboard keys for the various inputs you need but the game has transitioned very well to the Switch controller. I would’ve loved for touchscreen support for panning around or even selecting targets for the various services but I found no implementation of this sadly. When it comes to visuals and performance, 911 handles both aspects well across docked and handheld modes. The big standout feature I didn’t expect from this port was the HD Rumble feedback when moving the cursor across targets. It works similar to the implementation in Cities: Skylines with the rumble giving you a hint or letting you know you can select a position or a grid element.

Having only heard about 911 Operator before, it is a nice fit for the Switch with its nice use of HD Rumble feedback and with how good the port is. The game itself starts feeling repetitive after a few hours but if you’re a fan of games that test you with tension and quick actions, this is definitely one to look into. As a simulation experience, it does its job very well and the Switch port is great.