previous
Below Review
random
next
New Super Mario Bros. U Deluxe review
1 like 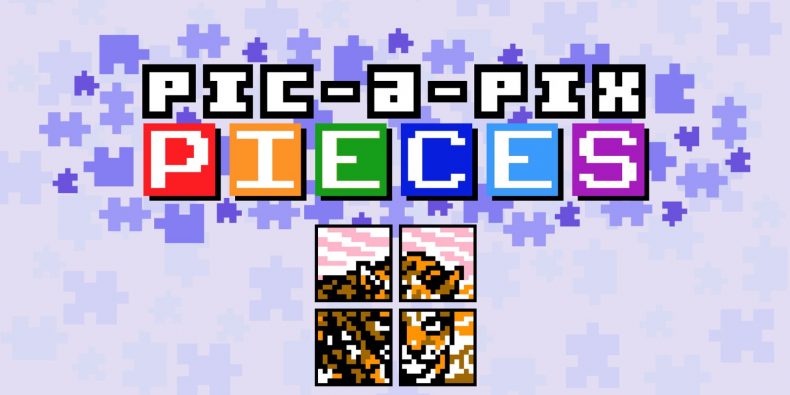 “It’s good, but it’s not right,” and “say what you see” were well-known phrases from lovable TV presenter Roy Walker uttered on a Sunday evening across 90s Britain. As the host of classic UK TV show Catchphrase, it was his job to run a show all about revealing piece by piece a picture that contestants had to guess to win prizes. And as I sit here with my Nintendo Switch playing Pic-a-Pix Pieces, I can’t get his Northern Irish dulcet tones out of my head. And sadly Mr Chips is nowhere to be found (yeah, you may want to look this one up).

And that’s because the ‘Pieces’ name of this iteration of the Pic-a-Pix series is the clue, as you work through to solve nonogram puzzles which are in fact just sections of a larger picture that only really comes into focus once all parts have been completed in full. Gameplay-wise there’s not a great deal to say here, as many will be familiar with how these Picross-type games work. As with more recent variations on the theme, it also makes use of different colours to add a layer of depth, compared to the traditional monochrome version of nonograms. It means you’re having to think slightly differently about what to do with each part of the grid. Sometimes colour-specific clues make things easier and you can employ some quick tips to fill parts of the puzzle, whereas other times multiple colours make it more complicated. Thankfully all puzzles can be completed with logic, removing the need for
guesswork to progress. And if that feels a bit stripped back in terms of detail, it’s because that is the game’s approach throughout. Upon loading up for the first time, you’re straight to the menu screen which presents you with 3 options – Play, Extra and Info. The first drops you straight into picking a puzzle to solve, with the second being where additional downloadable puzzles are stored (with a couple already there to get you going). The final option is a sort of “How to Play” series of static screens providing advice and tips on how things work. In addition to the mechanics of the puzzles themselves it will also introduce the controls, and extra features such as being able to mark blank squares on the grid, and also a feature that can check if what you have completed so far in a puzzle is correct.

In terms of the puzzles themselves, there’s quite a few in here. Whilst it only appears to have 10 screens of puzzles when you initially select the ‘Play’ option on the front screen, you’ll soon begin to see there’s more here than there originally appears. When you realise that each screen has two puzzles to solve and that each individual puzzle is made up of between 6 and 24 pieces, in total you’re looking at over 350 pieces of puzzle to solve. And that’s before you even begin on the extra content or downloading more, and even if some of the easier 10×10 grids only take you several minutes each, that is still a fairly impressive amount of time. And when you throw in the fact that the size of the grids increases to 15×15 and then to 20×20 as you progress through the puzzle screens, it adds even more complexity and therefore content and time for your buck. But there’s no getting away from it, that this game is just Picross, and if that isn’t for you, then it’s a hard pass. It does nothing to really elevate the mechanic that hasn’t already been done before either, with even the accompanying music just being a single retro-style melody that plays on repeat throughout your playtime. It’s not obtrusive or offensive, but like the gameplay, it is repetitive and whether either bother you will purely come down to how much you like puzzles, and nonogram puzzles in general. If you do, it’s an adequate entry in the series and is cheap, plus the pick up and play nature of the Switch is perfect for this type of puzzle game. It will be one of those titles you come back to, to rattle through a few puzzles before moving onto something else, and returning after a break.

However, when comparing it to other offerings, it’s fair to say Pic-a-Pix Pieces looks and sounds rough around the edges, presumably invoking the pixelated pictures you’re trying to create. And it is hard to recommend over similar titles like Picross S and Picross S2, which have a bit more polish and substance and are also available on Nintendo’s handheld console. As such it really only gets a recommendation if you’ve exhausted those other options and are after even more of a nonogram fix.

Repetitive music
Doesn't do anything new
Looks rough around the edges

Pic-a-Pix Pieces is more of the same nonogram puzzles, with nothing new to bring to party. It's functional and simple, but don't expect anything more.