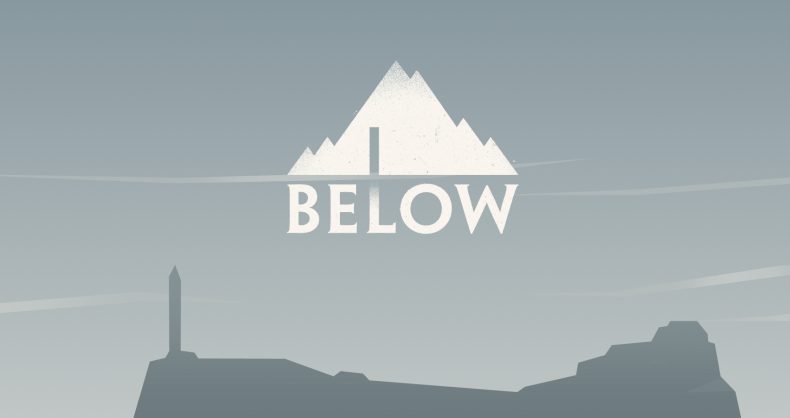 I was probably four or five hours into Below when I finally believed that I was actually playing it. It was back at E3 2013 when Capybara’s Below was unveiled for the world to see and my intrigue was immediately piqued. Whether it was the low poly-looking art style, the zoomed-out camera or the sense of mystery, I really can’t explain what part of the game grabbed me, but grab me it did.

Here we are at the end of 2018, just as I had given up hope of seeing the game’s release, and not only is Below finally here, I’ve actually played it. And it’s good. Very good, actually.

The game begins with a slow zoom, excruciatingly slow, almost feeling like an acknowledgement of the wait that players like myself have endured over the past five years. It was so slow that I started to believe that maybe I was supposed to be doing something, but no, I suspect it was some kind of commentary on just how far you’ve travelled and just how isolated you are on this adventure. Still that slow zoom continues: the sea undulates and the rain falls heavily, dark clouds passing overhead as the tiny mass of pixels becomes the tiny sail of a tiny boat. Still the continued zoom. Lightning flashes and thunder cracks the sky as your little boat finally comes into focus, as the water’s depth lessens and you’re soon beached on a completely unknown island. Unknown is an unfortunate theme of Below’s beginnings, I should warn you. There is no tutorial here, once you get out of your boat, you’re on your own. I get that the game is meant to encourage that feeling of exploration and discovery, which it does very well, but it will also put off a lot of players. Sure, you can look up the controls in the options menu, but that doesn’t explain any of the mechanics in the game, of which there are a few. And all of them will probably get you killed if you don’t know how they work.

Below is a roguelike, you see. If your little adventurer (not a euphemism) dies at any point, no matter how deep you’ve ventured into the island’s depths, that character will remain dead forever and another will wash ashore in their place. Before you roll your eyes at this, you should know that there are shortcuts dotted throughout the bowels of the island, some of which lead right back up to the surface, allowing you to cut out large parts of the early game. Finding your predecessor’s corpse is a morbidly good idea though, as you can collect their belongings to help you in your quest not to die again. That said, Below is also not particularly harsh in terms of difficulty, at least once you discover how its mechanics work that is. Where the difficulty lies, is in the way it forces you to survive. You need to eat and drink, which becomes quite difficult at times, so you should stock up on food and water through hunting fish and vermin, and through storing water in empty bottles you might find along the way. You can’t survive on these things alone either, so you will need to use campfires to cook yourself up some soup and potions, which are essential to keeping your hunger and thirst at bay during those longer bouts of cavern raiding. I won’t lie, there are times when hunger and thirst feels entirely unnecessary in Below, as they add an extra layer of frustration if you get stuck. I wasted a considerable amount of time and resources at one point, as I simply could not find the exit to the floor I was exploring. As it turns out, I simply had to place a key stone on a door that I had assumed was opened using my lantern, which would have made more sense had the game actually told me how to play it.

That lantern, then. It’s the first proper thing you find on your inaugural trip to the island, and it can be used for a number of things, but only if you have crystals with which to power it. These crystals are obtained by killing certain creatures on the first few floors under the island, as well as other, scarier means as you delve into the darkness below. The lantern can light your way and highlight traps, it can reveal secrets, but its most important use is to open certain paths as you progress. Thing is, if you do quite well and find yourself deep down in the darkness, you might find yourself running too low on crystals and restocking isn’t always possible. You can also spend 25 crystals at campfires as well, which turns their fire blue and offers a one-time teleport back to that camp, even if you have died and returned to the island anew. Again, the only way to discover this is by actually doing it. But what do you actually do in Below? Well, it’s a top-down (kinda) survival roguelike, in which you will fight various creatures while crafting all sorts of things like torches, arrows and bandages to keep yourself alive. You need bandages to stop the bleeding caused by certain attacks and traps, to add to the trials and tribulations already offered below the surface. The controls are simple enough, as is the combat as you use your sword and shield to stop yourself from being murdered in horrible ways. Its depth comes in the form of needing to dodge around certain enemies in order to get around their guard, or bash them with your shield. How about using secondary weapons like a bow to hit them from afar, or the hammer to smush them into a fine paste? Often, it’s as much about running away, as it is about fighting your way out of an area.

As it is a game of survival, there are certain elements that will attempt to ruin your day. Even though the floors are randomly generated, there are certain points where things will change. The first area to test me was the icy set of floors, in which not only were there no animals to hunt for food, there was also no water to slake my thirst as it was all frozen over. Adding to that, my body temperature would drop and I would have to light fires at set points. Fires that would only burn for so long, leading to a lot of panicked running as I searched desperately for the exit, praying each time that I would see the back of that icy hell. Only, things took a turn for the Silent Hill when I suddenly found myself much further down than I expected, and even the darkness itself tried to kill me. Seriously, the atmosphere in Below is something else, at times. That atmosphere is created not only through some impressive use of lighting in what could easily have been a visual style too simple to affect some players, but through a mixture of Jim Guthrie’s incredible, synth-heavy soundtrack and some beautiful use of directional audio. Upon entering a new screen on any floor, I found myself immediately put on edge when I could hear the scuttling of something nearby, even when the fog (which lifts as you move through the areas) prevented me from seeing more than a few feet in any direction.

Make no mistake, Below is excellent. Unfortunately, its refusal to teach the player anything is a problem that many won’t have the time or inclination to overcome, which is a shame because there is such a deep (sorry), rewarding adventure waiting below the surface (actually, I’m really not sorry). After waiting those five long years for its arrival, I may not have got a game that knocked my socks off, but I did get a game that constantly surprised me. I got a game that I will happily play for many more hours to come.

Despite its frustrating refusal to teach you even the basics, Below’s sense of discovery is as good as anything already out there, and its gameplay is as deep as its name suggests.