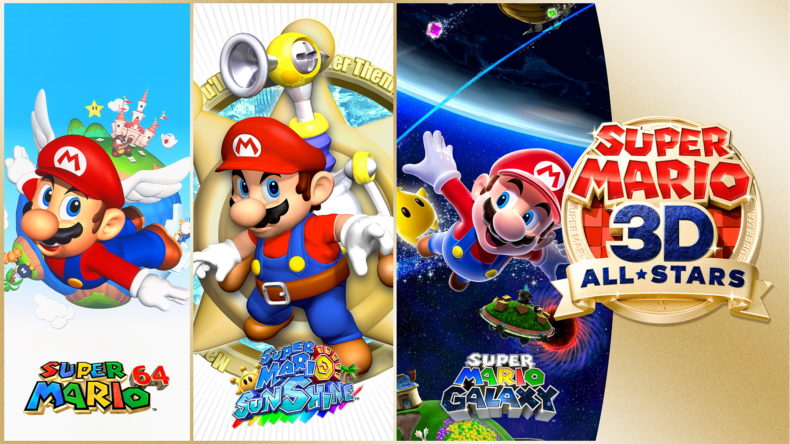 Do you remember the first time you played Super Mario All-Stars? As clear as day I can recall that opening screen, the chattering of the cast of characters behind the curtain, then the hush as they were revealed along with some of the best platform games ever made, even including The Lost Levels as a bonus for a Western audience, albeit a little toned down, difficulty wise. It was a love letter to the series, a pure nostalgia injection that felt like a game collection that could never be bettered and, nearly thirty years later, Super Mario 3D All-Stars is… well, sort of that, but also not quite that.

When all is said and done, I’m probably more of a 2D man than a 3D one. But in Super Mario 64 you have one of the greatest games ever made; a title that changed the industry. Super Mario Sunshine is a game that’s way better than ever given credit for because, unlike most Nintendo titles, it was a little rushed and could have done with just a tiny bit longer in the oven. Then Super Mario Galaxy, which is another brilliant game, though the motion controls to me still feel slightly superfluous, and in truth are one of the few disappointments in this collection. 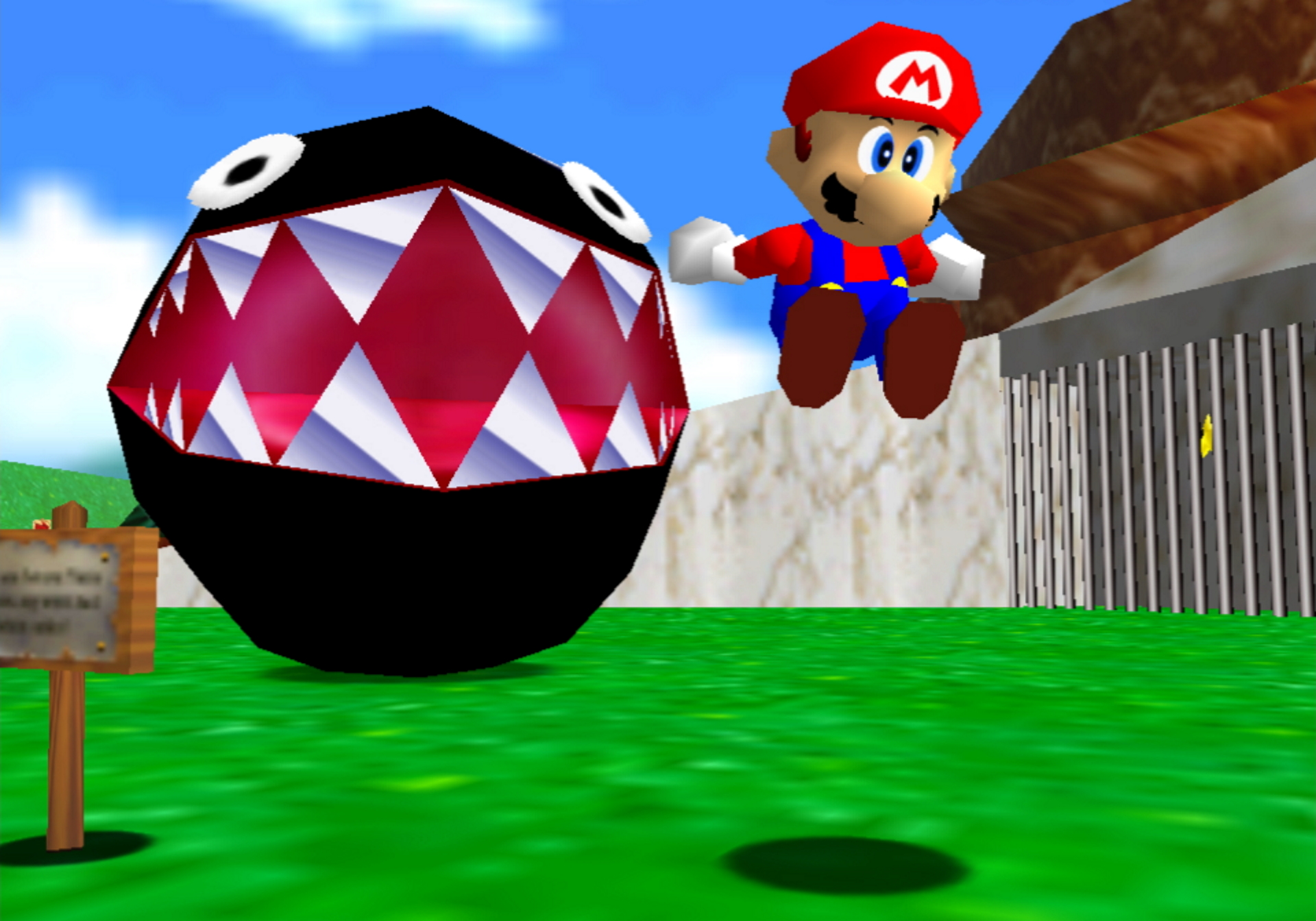 As a collection, though, this is three incredible games. I want to stress that these games run well, have been treated with respect in terms of the upscaling and widescreen support, and are still those same games you love from way back when. But also as a collection, it’s a little bare-bones. I’m not going to harp on about how the menus are lacking any of the creativity and charm of its All-Stars moniker forebear, because you don’t spend hours playing a menu. They key takeaway then, is that these games still play brilliantly.

Super Mario 64 has had a sheen of paint applied to it. It looks as though someone has run the game through a smoothing process in order to make it look more appealing to a younger audience, but that has the byproduct effect of tricking your brain into thinking that’s how it always looked if you were there at the time.

Really, not much else has been done to Super Mario 64, though. The opening is still beautifully brief, allowing you to get right into the action, and that icy downhill slope is still annoying and will take a few goes to readjust to the controls of yore. But really, Super Mario 64 holds up. I wondered if it would, with contemporary titles, even those such as Super Mario Odyssey delivering platforming perfection, but it does hold up, and it’s as compelling and breathtaking as ever. To think this scale of game was attempted back in 1996 is just baffling. 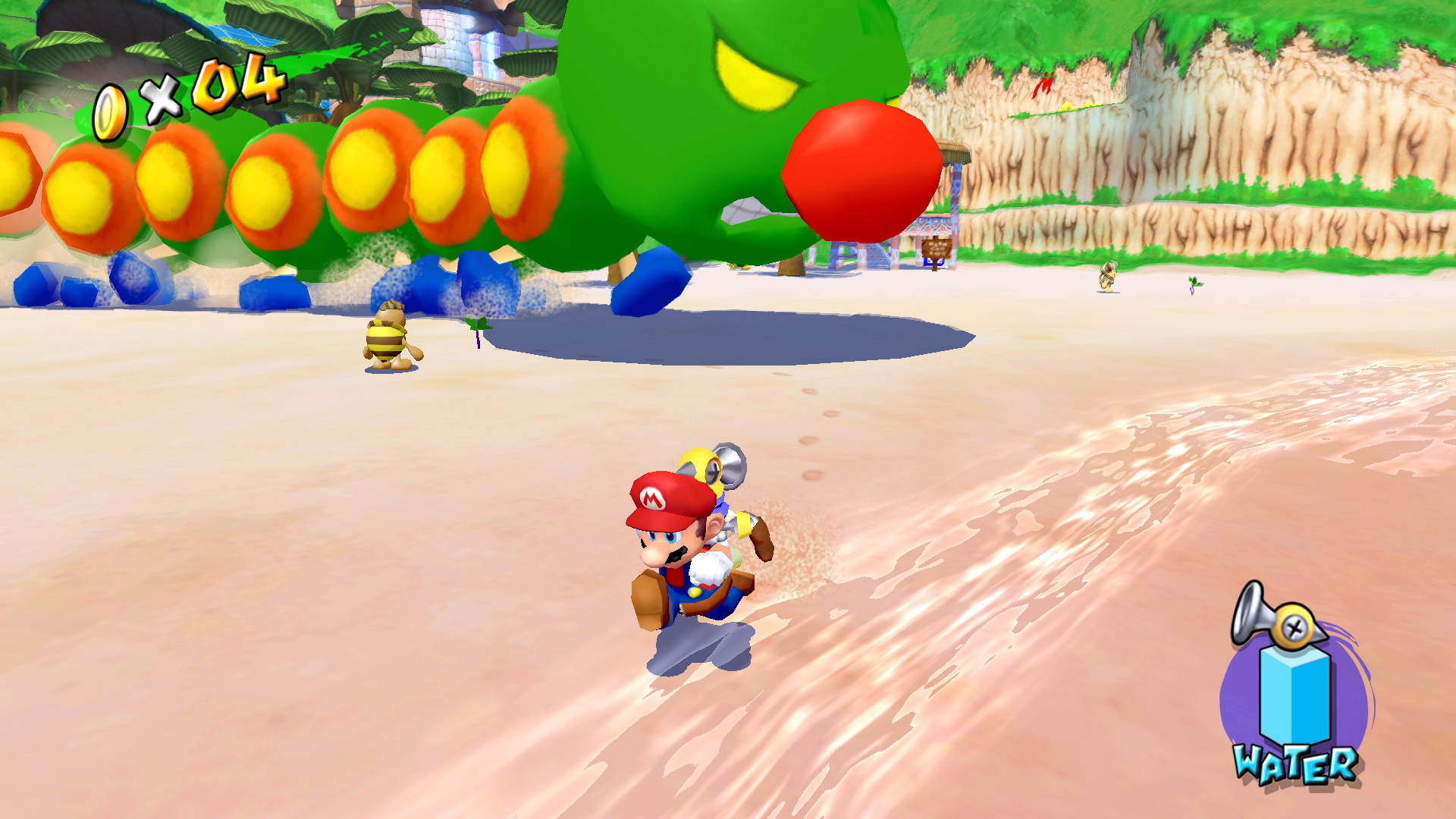 Super Mario Sunshine, then, I will still stand and fight for. I won’t pretend it hasn’t got issues, and the camera still sometimes requires you to wrangle it like it’s a bucking bronco, but even going from 64 to Sunshine, it’s remarkable how responsive Sunshine is. Nintendo has given this one the widescreen treatment and it’s done well enough that I had to stop and remind myself it didn’t always look like this. It’s actually a very nice visual overhaul, full stop, for Sunshine, because this game was another early 3D game and they don’t usually hold up, but the smooth visuals really do make Sunshine sing.

It’s worth having a play with the controls in Super Mario Sunshine, by the way, because without a physical or digital game manual, the game doesn’t actually teach you techniques like the spin jump (quickly rotate the stick and hit jump) which can also be done with FLUDD to spray all around you. Also, if you’ve never played Sunshine before, stick with it, because it has a slow start, but there are some brilliant levels hidden deep in this one. 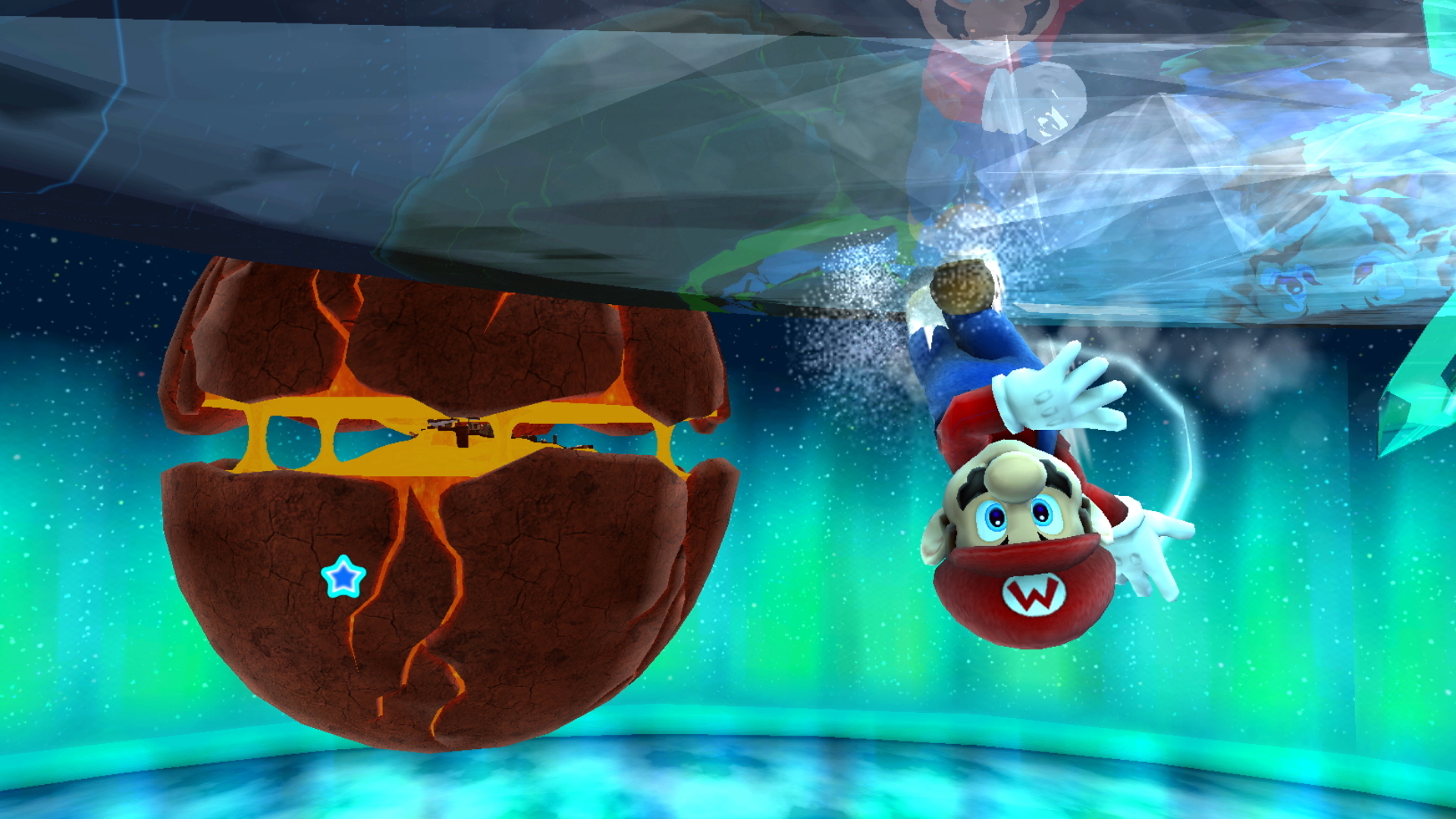 Super Mario Galaxy is the game I was most interested to try out in the collection, because my hope was that Nintendo had done some work and made it play like the other 3D Mario games, which is to say: no motion controls. That, sadly, isn’t the case, but there are some alterations. You can play without motion controls, but you swap them for touch-screen controls. In handheld mode the controls that require you to grab blue stars to pull Mario in are replaced with touch screen commands. Likewise, even selecting the levels from the observatory are now simple “touch the blue star” to pull him in.

If you want to play on the TV, though, you are going to need to either use the Joy-Cons how you would have used the Wiimote, or the Pro Controller’s built-in motion capabilities. And look, either are fine choices, but I had truly hoped there would be a way of playing that game without any gimmickry. It’s a little frustrating because elsewhere, instead of shaking the controller to attach to a yellow star, you can just hit the X button. This wouldn’t be so bad, but there exists an entirely non-motion controlled version of Super Mario Galaxy for Nvidia Shield, which gets you to use the right stick as a crosshair. On top of that, Super Mario Odyssey showed that you could include motion controls but also make an option for people to completely ignore them, even if the highest skill ceiling was easier to achieve with them.

Honestly, this is all a bit confusing, because while there will be people asking why the Shield version wasn’t used here, the Switch’s Super Mario Galaxy has been touched up visually, which suggests that work has been done here to make it more palatable for a 2020 audience. There’s no question when playing it that Galaxy looks gorgeous, and if there had been more accessibility options for playing the game, it’d be the star of the show, without question. It’s still a wonderful game, of course, but it just feels like Nintendo hasn’t gone as far as it could with this one. 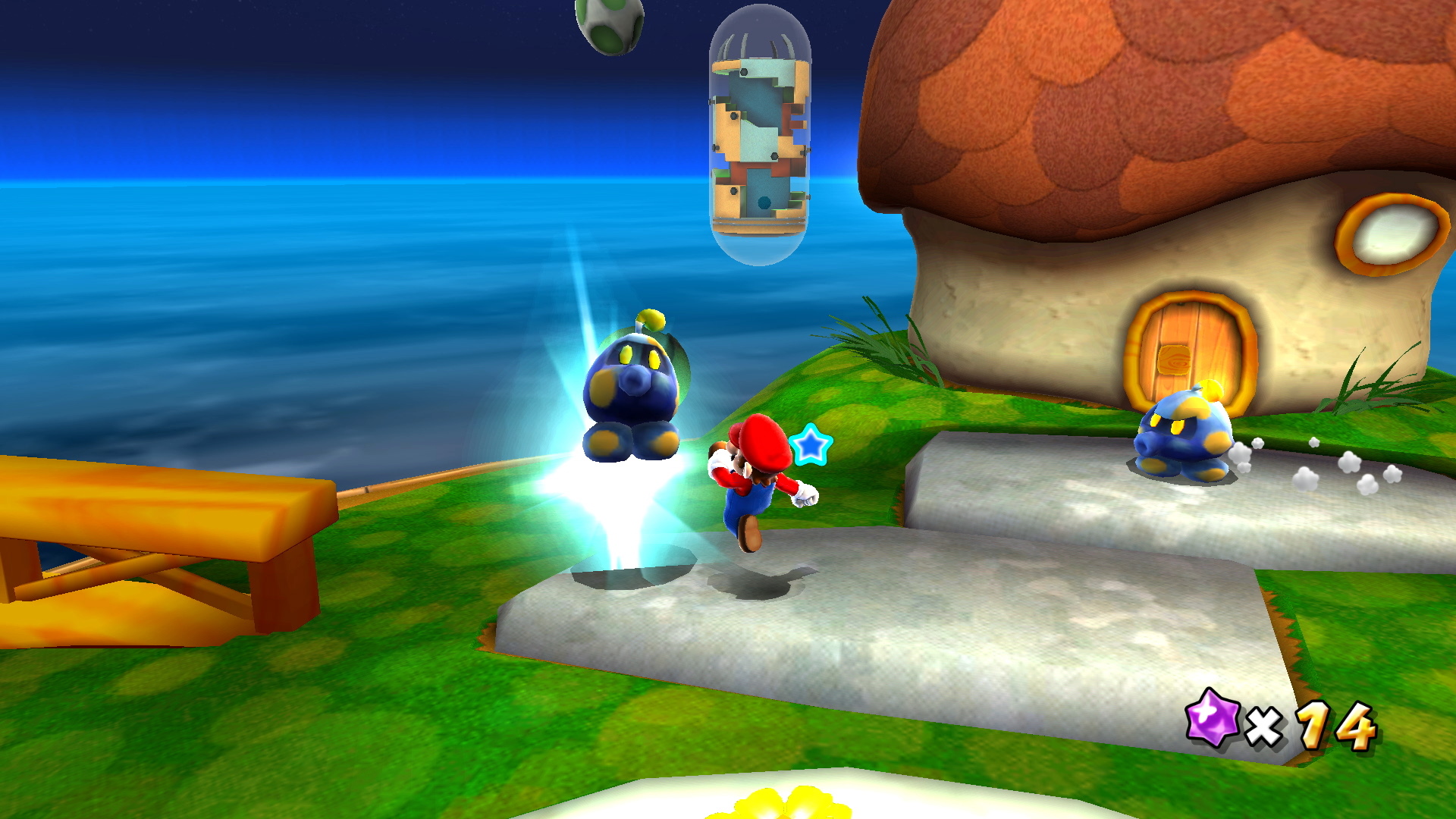 And that rather leaves me with a strange conundrum, because Super Mario 3D All-Stars is, without question, a compelling, brilliant selection of three of the best 3D platformers ever made. It is a celebration of the 3D games, but the addition of soundtracks doesn’t really feel enough to make it a landmark release. Instead, it feels like a collection of the 3D Mario games, touched up and packaged in a relatively no-frills manner, bringing them into the modern era, albeit without quite going all the way.

But they are still brilliant, nay, fantastic games — there’s just a feeling this package could have been a little bit more. Whether the year it was released, with everything that’s gone on has affected the way 3D All-Stars came together, we’ll probably never know, but it still comes with a wholehearted recommendation simply due to the quality of the games, and let’s face it, you probably already have it pre-ordered, right?

Whether the year it was released has affected the way Super Mario 3D All-Stars came together, we’ll probably never know, but it still comes with a wholehearted recommendation simply due to the quality of the games.

You may also like
nintendoSuper Mario 3D All StarsReviews