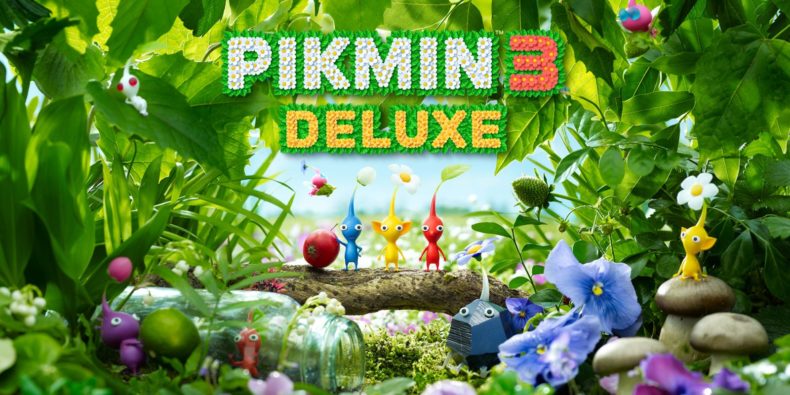 There’s just something about Nintendo isn’t there? Despite the world around them seemingly falling apart, they stay steadfast in their joyful passions. It is fitting that the origins of Pikmin come from creator Shigeru Miyamoto watching some ants in his garden and wondering about the fun gaming possibilities. It’s such a quaint story, and befitting of the man and indeed the company as a whole. And now with Pikmin 3 Deluxe arriving on Nintendo Switch, there’s an opportunity for more people to dive into the latest quirky adventure, in more ways than one.

Pikmin 3 Deluxe is doing, on the surface at least, what most re-releases do on future consoles, by bundling together the main game with the DLC that came later. Meaning this time around you’re getting the Mission Modes rolled into one for your money. But it’s when you dig a little deeper into Nintendo’s wondrous garden world you realise there’s much more on offer here to enjoy, and different ways to enjoy it too. 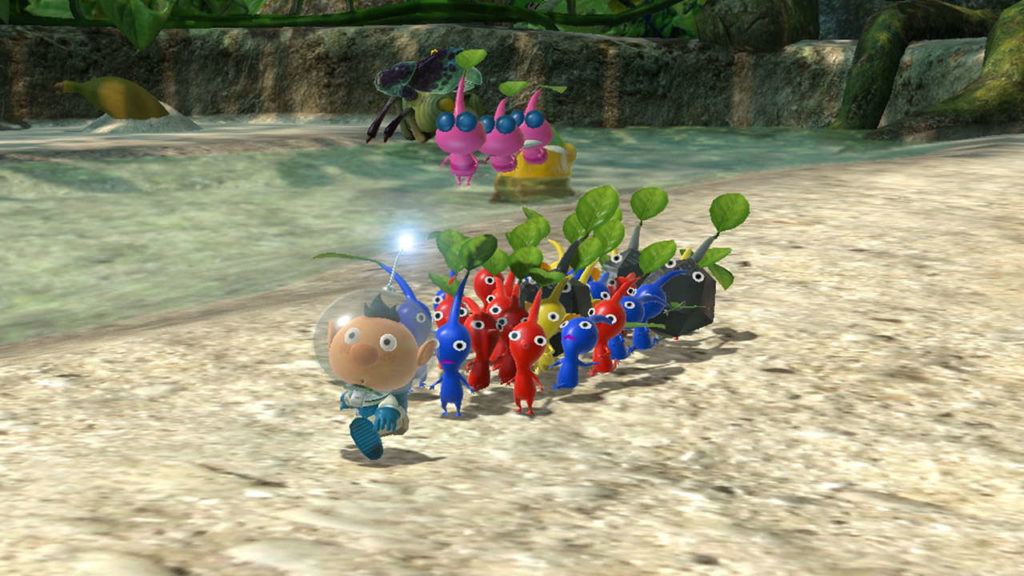 The biggest change for Pikmin 3 Deluxe is the introduction of cooperative play locally. This means you and a friend can team up and take on the main story and many of the other modes together for the first time. And from what I’ve played so far it works very well in practice. The screen is split vertically, with each of you controlling your own camera. My wife and I were free to go about our business as we pleased, splitting the Pikmin between us to do our bidding. The co-op is seamless in the story too, as even if there is only one playable character for story reasons, then you each control a separate version of them, meaning no one is left on the sidelines.

What this does do right off the bat is introduce a teamwork mechanic to proceedings. Whereas before you’d be ordering your crew around to complete certain tasks, you can now divide and conquer organically and that feels great. Helping each other out by chucking the required Pikmin over a gap to where your partner is beavering away at a separate goal is very rewarding. You’ll find yourself nabbing more fruit and making progress quicker than you would solo. This eases the pressure of ensuring you find enough Pikmin and fruit to sustain your exploration from one day to the next. 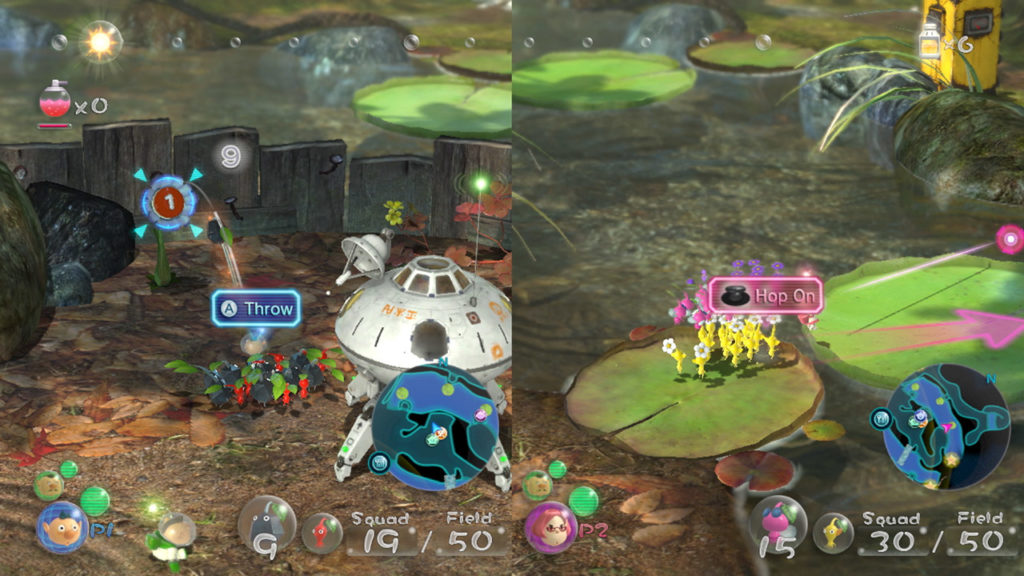 To counter that point, there’s an argument that this coop play makes Pikmin 3 Deluxe too easy, and that’s a fair comment. Being able to strategise verbally with someone in the same room and control characters independently is much more efficient both for exploration and tackling enemies and bosses. But Nintendo has thought of this too with added difficulty settings for you to choose should you need more of a challenge. Newcomers can opt for the standard difficulty, whereas series veterans can opt for the harder mode, even unlocking a third difficulty should you master that.

Adding to that feeling of accessibility are some options and tweaks to again manage how you want to play Pikmin 3 Deluxe. There’s now a hint system that can be toggled on or off. When active, a press of the D-Pad offers helpful advice for areas you’ve yet to explore or puzzles you’ve yet to overcome. The hints are clear and to the point so should only be used if you’re really in a pinch, because they’re certainly not cryptic. It’s very much a case of “go here and try doing this”. However, I did find it useful for pointing out when the best thing to do is pack up and go and explore another area, because Story progression lies elsewhere. This stops you wandering aimlessly searching for nothing until sunset. 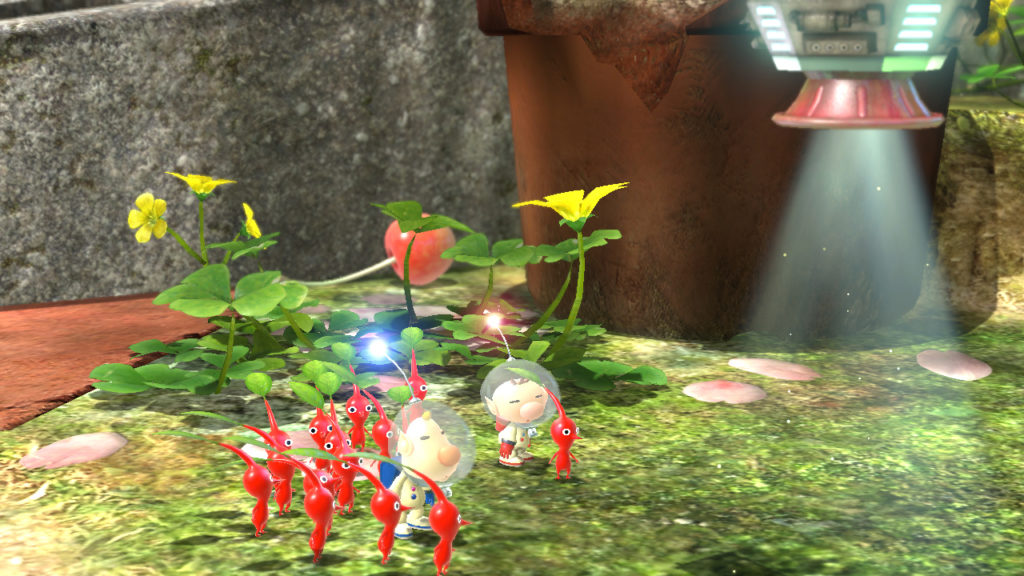 You can also choose to turn on the use of the gyro controls for aiming your Pikmin. There are also options to tweak how and when these gyro controls are used to customise your experience. You can for example use the touch screen to aim, or stick to a control stick depending on your preferences. You can even invert the gyro controls horizontally or vertically as well if you want to, depending on what feels right. Old-man me preferred the normal analogue stick for moving and trigger button lock-on system to aim, but it’s great to see such consideration for other control schemes, and to see the Switch functionality put to good use.

Pikmin 3 Deluxe is shaping up to be a really good package for newcomers or fans of the Wii U original. There’s obviously a core game in here that is still very well polished in terms of design and playability, and it’s been spruced up a bit visually for the Switch too. The added coop feels well integrated so far and gives Pikmin 3 Deluxe a lovely sense of camaraderie akin to that felt between its main crew of characters. The added Missions and Side Stories provide even more content for you to enjoy, encouraging you to spend more time in its lush iconic environments. This is more than just a simple re-release, and should definitely be on your radar when it launches later this month.