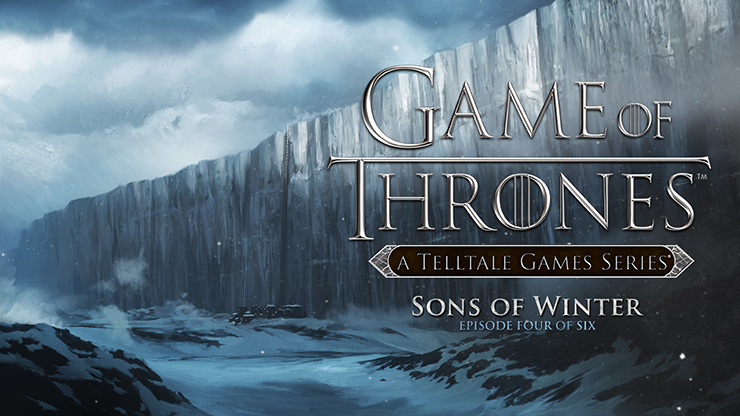 After such an explosive start, TellTale’s adaptation of HBO’s adaptation was beginning to flounder a little bit. The most recent episode, The Sword in the Darkness, didn’t feel important and character progression had almost halted, in some cases. While the conclusion to the second act is still not at the same level as what we’ve previously seen in this series, Sons of Winter gives Thrones fans a glimmer of hope that this story’s conclusion could provide as much tension and drama as act one.

Naturally enough, the subjects of this GoT spin-off are all in dire situations. Toward the end of The Sword in the Darkness, in a fit of rage, Gared had disposed of his father’s murderer atop the wall, Mira was trying to help her family from King’s Landing, Rodrik learned of a Forrester traitor and the exiled Asher had ended up in front of Daeneyrs Targaryen, mother of dragons. The most surprising takeaway this time round is that arguably the most interesting and dullest characters’ arcs of Game of Thrones so far stumble and flourish respectively. After underdog Gared Tuttle had put an end to Britt’s life, it seemed like his tale of life at The Wall would continue to grip, but it sadly takes a dive. With Cotter and Finn by his side, the group go searching for the North Grove his uncle Duncan had told him about, and largely end up spinning their wheels. The former squire isn’t a major focal point in this episode and his inclusions feel insignificant — a stark contrast to what I’ve felt up to this point in the series.

Asher, however, was the black sheep of both the family and of every episode so far. Trying to gather an army of men to take on House Whitehill, Asher’s appearances have been groan-inducing thus far, but it’s actually a secondary character with Asher that steps to the forefront in Sons of Winter, and they make these sections far more intriguing. Fellow mercenary Beshka produces a revelatory tidbit on her past and while it’s questionable as to why Asher wouldn’t already know this, for us it gives a lot more weight to the task set to them by Daeneyrs. Speaking of Khalessi and celebrity involvement, a common theme throughout has been that most male actors from the TV show have been lacklustre, while females have been real standouts. Emilia Clarke (Daeneyrs) doesn’t quite match up to those that have come before her, but it must be said that she is a vast improvement on the vocal stylings of Kit Harrington as Jon Snow.

Lady Margaery’s housemaiden, Mira, just so happens to be the most compelling of all the playable characters as it can be seen that King’s Landing is having an effect on the young woman. The ability to manipulate is a powerful one in the area of The Iron Throne and it’s clear that the once innocent Forrester realises that she needs to use everything at her disposal to help her family that are a great distance away. One particular sequence happens at King Tommen’s coronation, as Mira must eavesdrop on multiple conversations to obtain some very delicate information. Game of Thrones is pretty light on gameplay, so giving the power back to the one with the controller in their hands is a welcome one, and it works very well. Rodrik’s stuggles at Ironrath reach their height as Gryff has appointed himself King of the proverbial castle and rules with an iron fist, expecting the head of House Forrester to give in to his every command. Similar to Mira’s acceptance of how things work in King’s Landing, Rodrik understands that to make an Ironrath omelette, you have to break a few Whitehill eggs. He has been pushed dangerously close to breaking point and there are a number of instances here where we see the now-crippled Lord say enough is enough.

Thankfully, Sons of Winter begins the process of getting things back on track. While Gared’s story is lacking here, there’s a sense of progression with the other three protagonists. And although the tension isn’t at the levels seen in episodes one or two, the fantastic closing moments can lead one to believe that Game of Thrones’ culmination could be an explosive one.

Backdrops still aren't easy on the eye, Gared's tale has dipped and it doesn't have the tension present in previous episodes, but Mira and Rodrik's gradual transformations are a delight, and Asher's narrative finally steps up.