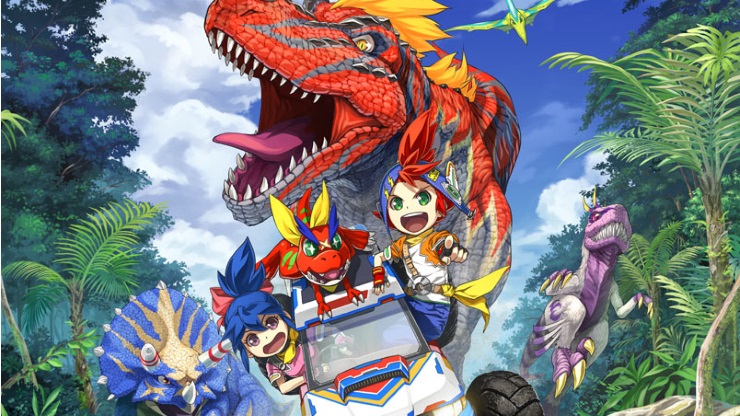 Fossil Fighters is an idea that sounds good on paper. As a warden of a fossil park – the male version appears to be a fan of SEGA’s Billy Hatcher, if his dress sense is anything to go by – you patrol around the parks, digging up fossils to turn into Vivosaurs (gaudily coloured variants of dinosaurs) and use them to keep the rogue Vivosaurs populating the parks in check. This is alongside a Saturday morning cartoon formula encapsulating an evil group plotting to take over the world and a group of plucky young wardens opposing them. Even better is that it’s Pokemon with dinosaurs. Dinosaurs are cool, right? My son loves them, so it’s an idea that should appeal. But these are Vivosaurs, not Dinosaurs. The difference being that Vivosaurs are made up versions of the proper things so that the developers can create many more types and palette-swap them to give them elemental attributes. The usual suspects of Fire, Earth, Water, and Air are joined by a Neutral element. There’s your usual rock, paper, scissors system going on here with one element weaker or stronger than another – with neutral having no advantage or disadvantage against anything. Your ‘saurs have very few elemental attacks, as such their elements grant them nothing more than extra damage against one type, and heightened weakness against another. It’s nothing ground-breaking or spectacular.

Unspectacular is a kind word to level here, from the dire opening sequence (with dreadful theme tune) to underwhelming ending, the game is plain ugly to look at. The Vivosaurs themselves look like poorly crafted toys that have in turn been painted by a pre-school art class. It’s funny in a way, as you’ll dig up fossils, see a realistic skeleton for the ‘saur, and the revived creature looks like a shaved and confused duck-billed platypus.

Digging up fossils is fine to begin with, but quickly grows boring and repetitive. You’re granted a hammer a drill, each of which can be incrementally upgraded as the story goes on. The hammer is used to loosen large amounts of rock, while the drill can be used to remove easier pieces of debris without damaging the fossil. Later you can buy chisels that make removing large pieces of rubble easier but require care to use without damaging your prize. They’re tricky to use, but are needed for some of the tougher to acquire fossils. Each acquired fossil from a set will result in your ‘saur levelling up, with each new body part for existing creatures unlocking new abilities for them to use in battle. It really doesn’t take long for the monotony of the process to surface and before long you’ll be trying your best to see how far you can push on without grinding for missing pieces. Repetition and boredom doesn’t just set in there, either. Battling is a slow and long-winded process. Attacks take ages to go through, and your allies chime in with repetitive statements that really have no need to be said. Fights between gargantuan animals shouldn’t be as dull like this, but you’re basically looking at badly modeled plasticine lizards have a slow motion slap fight. It’s not the sort of stuff that’s going to get pulses racing.

Mmore fossil parks come as you progrees, and completing the current story arc will in turn open up challenge routes within them. These are A-to-B races against the clock to prevent a fossil being destroyed so that you can claim it for yourself. One wrong move in these and you’ll find yourself staring at a fail state needing to try again. Should you be successful, you’ll be rewarded with a shiny gold fossil for whichever Vivosaur it’s for, bestowing new, more powerful skills to aid you in battle.

Aside from these routes, you’re encouraged to take part in tournaments against faceless opponents and complete fetch quests for people outside of the main story. These are entirely optional, but the items and experience you gain from them will come in handy during the end game, which, while not extremely hard, will provide a considerable challenge to lower leveled players. Tournaments will provide your best source of experience, as Vivosaur fights in the environments provide very little in terms of points. Annoyingly there’s a level thirty cap on all the creatures – while your stats may look fine at this point, it does put a rather unfair restriction on you towards the end game. Considering you’ll want to use your most powerful allies and monsters to win, and you’ll have considerable odds to overcome it seems like a rather arbitrary cap to impose.

Fossil Fighters Frontier is a boring take on the excellent idea of dinosaurs fighting each other. The repetitive nature of digging up fossils and the plodding pace of the battles does not make for an interesting game at all. Kids do love repetition, but I doubt many will stick with this for long, especially when they could be playing Pokemon.

Fossil Fighters: Frontier is a boring take on the excellent idea of dinosaurs fighting each other.