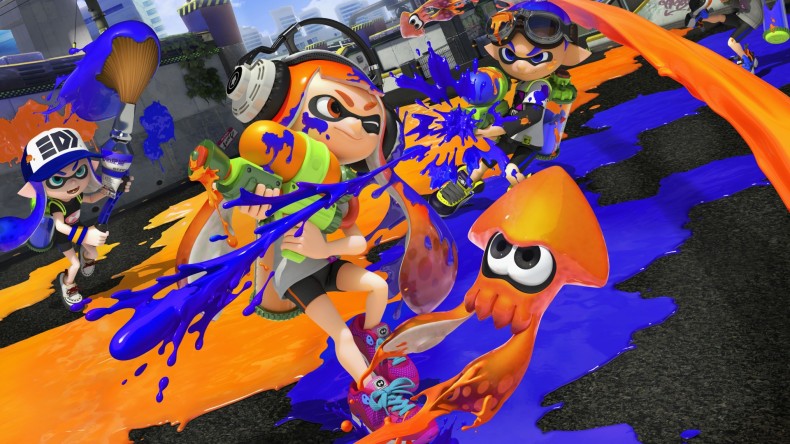 Splatoon’s world is bright, colourful and full of charm; pretty much the norm for a Nintendo game. It’s also a lot of fun, as anyone who has played it will attest to. Nintendo have put their spin on the competitive multiplayer shooter, but unfortunately, it just doesn’t quite live up to the hype.

The inhabitants of Inkopolis are obsessed with being ‘fresh’, to the point where you can’t get served in a shop without meeting their freshness requirement. This extends to gear being locked behind higher levels. If you haven’t already guessed, this is your standard shooter leveling up system hidden behind a friendly veneer. So, yeah, competing in online matches nets you ‘freshness’ and coins. Freshness grants you the right to buy items, while coins give you the means. At level one, your access to items is non-existent, but you’ll be able to put up enough of a fight to start earning your way.

You see, splatting (never killing) members of the opposing team isn’t the goal here. Instead your goal is to cover as much of the arena in your team’s ink colour as possible. Splatting an enemy makes them explode in a shower of your team’s ink, coating a rather large area, but taking out your enemies is still secondary to the main objective. As such, this ensures that anyone can jump right in and start painting the town red (or blue, purple, or green). Nintendo have certainly spent a while on making sure that they’ve got their weapon balancing right. Once you’ve graduated from the Splattershot Jr. there’s an extensive arsenal to fulfil your splatting needs. The Splat Roller may seem overpowered due to its ability to paint large areas in a short amount of time, but that is easily nullified by a long range weapon like the Aerospray MG or the Jet Squelcher. The former has a high fire rate and long range, but low damage, making it great for coating areas quickly, but also taking out people with weapons like the roller that are more effective at close range. The Squelcher, meanwhile, is more like a sniper rifle, having excellent range and damage, but it’s terrible for inking.

Other than weapons there are three categories of clothing to wear: head, torso, and feet. These carry buffs, when the item has earned enough freshness it levels up and opens another buff. More expensive items carry more buffs to unlock, but require considerably more freshness to unlock them. You can buy these from their respective stores, or, once you’ve spoken to the rather shady character in the alleyway, you can investigate other players and order items they have that you like. He’ll then procure the goods for you, but with different perks. Outside of that there’s no way to actually interact with other players in the hub, it only really exists to save you staring at menus. There are six arenas in total, a mixture of large open spaces, thin walkways, and funneling points designed to bring opponents together to encourage splatting. They’re tightly designed, allowing routes to work around if the middle is being dominated, so that there’s always a way for the team behind to turn the tide. Being able to launch from your team’s respawn point to the location of a team mate to back them up reinforces the fact that most matches aren’t lost causes.

The biggest problem is the number of arenas themselves. Six isn’t enough, and at any time only two are available in the normal online play, and ranked battle mode (which is unlocked at level ten) also has only two arenas available, albeit different ones. It may not sound like such a big deal, but the rotation takes quite a while to change to the next set of maps, and with only two available, you can repeat one map until you finally get to the other (on one occasion I played the same map five times in a row before I got a change of scenery). To make matters worse, the news report that tells you which arenas are available can’t be skipped, you have to watch it every time, which is infuriating.

This problem worsened by the lack of game modes. Turf War is your regular online battle mode, where both teams vie to cover as much of the ground with their team’s colour as possible, and whoever covers the most before time runs out is the winner. Splat Zones are only available in ranked mode and require the teams to control a specific area. You do this by making sure it’s coloured mostly in your team’s colour. They at least encourage more in the way of battling, forcing players to be in a single area fighting to control it rather than spread out throughout the map, but the general victory condition is the same. There is a third mode which has one player use the gamepad screen and another use the TV with a standard controller setup; you can compete in a match to pop more balloons than your opponent. Unfortunately this is only available in local play, and it is only available as 1v1 mode. Considering Nintendo’s history with offering four player split-screen multiplayer modes, it’s surprising that Nintendo haven’t fleshed this out more. In fact, it’s surprising that Nintendo haven’t fleshed out the multiplayer more in general, I’ve already bemoaned the lack of arenas and game modes for it, but the structure outside of this is so archaic that it’s stuck in the early 2000s. Matches have to be 4v4 and anything less than eight players sees the player search abandoned, so you then need to rejoin a lobby. While you’re in a lobby waiting for it to gather seven other people to play with there’s nothing to do apart from the cute little Doodle Jump clone (Squid Jump) on the gamepad. You’re literally left to sit and wait until enough players are gathered and a match can start. There’s not even the option to configure loadouts, which can only be done outside of lobbies – it’s frustrating. One minute you can have a definite group for the next round, but you want to change your equipment, so you’re forced to quit out, and when you’re done you have to wait for a whole new lobby to gather, and this isn’t even taking into consideration that you cannot exit a lobby once you’ve joined unless you want to completely power down your Wii U.

It gets worse when you consider what content is due after launch. We’re expecting new arenas and game modes (naturally), but also coming later (August to be precise), is the ability to create four player teams to go out and battle with, or sort out your own 4v4 matches amongst your friends list. Why this isn’t available at launch is baffling. Looking at what is missing from day one makes me wonder why Nintendo (of all developers) didn’t look into delaying Splatoon by a couple more months to ensure the game had this content straight away. Considering their philosophy on delayed games, it’s a massive oversight. At least accompanying there’s a story mode, though. It’s a decent companion to the multiplayer which helps you learn the basics. The Octarians have kidnapped Inkopolis’ Great Zapfish, and yet no-one seems to really care, except for one Captain Cuttlefish, who recruits you into his secret organisation to rescue the zapfish and return it to Inkopolis. You’ll find yourself moving around Octo-valley, finding kettles (nope, no idea either) that transport you to worlds of floating platforms and obstacle courses. Each segment of a level ends with a launchpad that evokes feelings of Mario Galaxy as they launch you through the air to the next checkpoint. It’s a lovely sight to behold.

Completing all the levels in an area opens up the boss. These are cute, colossal creatures that require you to use all your inkling skills to get around and defeat. As long as you’ve had enough practice, none of these should pose a problem. Victory grants you access to the next set of kettles and a blueprint to hand to the gun shop owner who uses them to craft new weapons to sell. In the five or six hours the campaign takes there are only a few frustrating moments, which tend to come in the levels themselves – but persistence pays off and you’ll get through them. The final boss is a considerable challenge, though, an amazing spectacle and very lengthy battle. The campaign doesn’t overstay its welcome, but the meager run time doesn’t add enough to the threadbare online component. Yes, there are your usual small secrets off of the beaten path, which, while entertaining to see, are in no way compulsory, but they don’t take much in the way of exploration to find either, so you should have many of them by the time you’re done.

In true Nintendo style, the graphics and sounds are top notch. The characters and locations are beautifully rendered, with terrific design and bright, bold colours. Functional good looks are Nintendo’s bread and butter, and here they have proven themselves once again to be masters of their craft. Sound design is also up to their usual lofty standards with excellent toe tapping tunes. Sound effects are equally nice, the denizens of Inkopolis speaking in a Sims style gobbledegook, the noise the ink makes as it splats against a surface, and the squelching sounds as you zip through ink in squid form, it’s all sublime. Splatoon is a game that I desperately wanted to love. This is the game that convinced me to buy a Wii U, and it’s disappointing to see that Nintendo haven’t really built on the promise. In fact, it’s not disappointing, it’s heart breaking. That may sound strong, but in retrospect it’s obvious why Nintendo time limited the demo in the way that they did. That way, they could control how much of the game you had access to, and how long you had access to it – a canny move on their part in that respect.

This is a fun game, it really is. There’s so little meat on the bone, and doesn’t feel complete. It’s impossible to review potential, I can only comment on what is in front of me, and while what’s there is fun, there just isn’t enough of it.

What is here is plenty of fun. But like the ink that covers Splatoon’s surfaces, there’s really not a huge amount of depth in here.

OlliOlli World: Finding the Flowzone review
Evil West | 6 Tips to get you started
Pokemon Scarlet and Violet Legendaries | How to find and unlock Legendary Pokemon
The Devil in Me | How to keep everyone alive
The Devil in Me | How to kill everyone
Escape Academy: Escape from Anti-Escape Island Complete Walkthrough
Escape Academy Take to the Skies Walkthrough
Social Media
SUBSCRIBE
All content copyright GodisaGeek.com
Fonts by Google Fonts. Icons by Fontello. Full Credits here »
Posting....