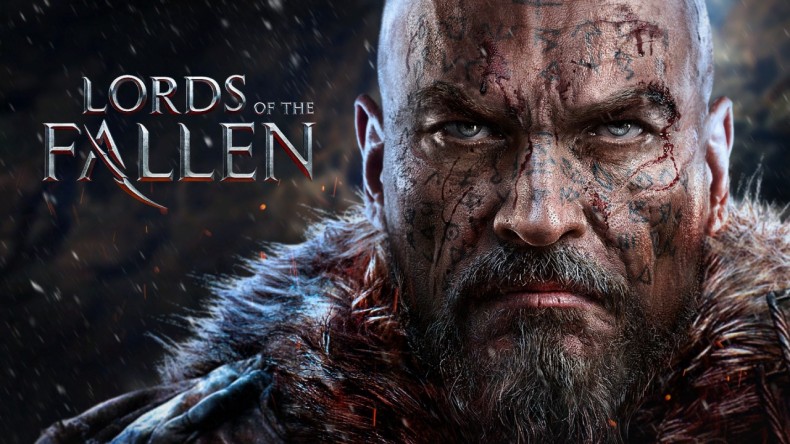 Let’s not beat around the bloody, limb-strewn bush here: Lords of the Fallen takes several noticeable cues from one particularly tough RPG behemoth, and it isn’t afraid to let the world see its influences. That being said, what’s not immediately apparent at a glance is that Lords of the Fallen not only takes those cues but, in many cases, runs with them, too.

It tells the story of a world where crimes are punished for a lifetime, and the leaders of humanity strive – through such strict punishment – to eradicate all sin. As the tale opens, convicted criminal Harkyn travels alongside an old monk (and his former jailer) named Kaslo, to the Keystone Citadel. A rift known as “the Pathway” has opened, and from it a race of demons called the Rhogar have emerged – they who serve the Fallen, a resurrected, malevolent god. Being an expendable lag with a redemption complex, Harkyn has been signed up to stop them. He’s an iconic looking chap, burly and rugged, his face covered in runic tattoos that symbolise his every sin – and apparently whatever sins he may have committed, he committed them like they were going out of fashion.

You can’t customise Harkyn’s physical appearance, but you do get to pick a class from three available options: Warrior, Cleric and Rogue. These are pretty self-explanatory to any RPG fan, and Lords of the Fallen doesn’t really add anything new: the Warrior is a melee tank, the Cleric mixes mid-range armour and damage with various buffs, and the Rogue can dual-wield with lethal speed. Each comes with four unlockable skills that can be upgraded twice; for example, the Rogue can conjure a mimic that copies his actions for double damage, or he can leave a decoy on the battlefield to draw enemy threat. While any class can wear any armour or wield any weapon (Cleric Harkyn is just as monstrous as Warrior Harkyn, after all), the discrepancy in attributes means he’s always affected by the weight of what he’s wearing. Combat is mapped by left and right hand and utilises the triggers and bumpers, with a light and heavy attack, block (if you have a shield) and a shield-specific move (bucklers parry, kite shields stun, and tower shields can be slammed into the ground to form a one-man bulwark). Early on you’ll find a magical gauntlet developed by the monks of Keystone that has become defective, and will only serve those with an impure soul. As a result, when Harkyn straps it on it becomes a powerful ranged weapon with three charges: explosive launches a bomb, blast does up-close damage and projectile snipes enemies from a good distance. The damage is low, so it’s analogous to War’s pistol in Darksiders, and best used to harry the opposition and interrupt their actions.

Between spells, the gauntlet, consumables and multiple stances (sword, board, dual wield, two-handed), it can be a challenge to get your head around switching gear on the fly, but they’ve done a good job of making it fairly intuitive. Tapping circle will cycle your spells, while holding it will cast them; left on the D-Pad cycles your gauntlet modes, triangle switches stances, and square both cycles and uses potions. Good old cross is the designated jump and roll button. It takes a few fights to get the hang of it, but it’s not long before you’re able to utilise all of Harkyn’s talents as the moment demands. The semi-open world is littered with passageways and short-cuts, secret gates and hidden treasures, and each area leads towards a confrontation with one of the titular Lords. Dark, lamp-lit corridors and dampened cellars are the order of the day, and Lords of the Fallen delights in leading you into every one of its macabre chambers, strewn with human remains and evidence of violence and destruction. It pays to move slowly as you explore, as every corner potentially houses a deadly enemy.

“It could be one
of this year’s most
promising new IPs.”

Lords of the Fallen doesn’t punish you cruelly for death, but treats each one as a learning experience. When you do catch a jagged blade to the clavicle and go down bleeding, you’ll leave behind a ghost containing your XP, which will slowly diminish over time. Red crystal shards dotted here and there act as checkpoints where you can bank your collected XP to keep it safe, but the more XP you carry with you; the more you earn thanks to a clever risk/reward system. The checkpoints are fairly close (usually around ten to twenty minutes apart), and using them doesn’t cause enemies to respawn – though a death will. Exploration and courage are always rewarded, so it pays to go the extra mile when you feel you can.

At times, Lords of the Fallen seem to truly understand what fans want from an Action-RPG of this ilk. It’s Dark Souls-like, but less punishing, rewarding you for exploration with piles of loot and dozens of armour sets and weapons, adding a rune-crafting system that doesn’t feel complex and presenting a style of combat that’s part strategy and part arcade hack and slasher. Action is immediate and brutal, combat animations and backstabs are slick and aggressive, and the enemy design is spot on: every opponent looks fearsome, forcing you onto the back foot until you understand the nuances of the fighting. Unfortunately, the combat doesn’t always feel fair. Fights aren’t always considered bouts of strategy and tactics; sometimes Lords of the Fallen simply throws too much at you. You’ll find yourself trying to tackle two leaping, twirling enemies at once while a demonic hound charges you and an archer harries you, and you’re without cover. Other times you’ll be trying to face two brutes in a tiny cramped space. Enemy placement seems random, and you won’t be able to resort to simple kiting because the AI often struggles to decide whether to advance or retreat.

These sudden spikes in difficulty make the game hugely frustrating at times, and even the close spawn points don’t alleviate it, as you’re simply throwing yourself into the same unwinnable fight over and over. Occasionally you’ll progress and then enter a new area that you didn’t realise was a new area, whereupon you’ll get your ass handed to you on a plate. An early example is on a bridge after the second boss, where one half of the bridge is populated by standard enemies, but a little further on they suddenly become nigh invincible without warning. It took me eight attempts to kill a Rhogar knight assuming he was a special enemy, only to then be immediately killed by a lowly grunt two steps later. As the game progresses and Harkyn becomes tougher, it’s less of a problem, but while Lords of the Fallen may be more forgiving than some of its peers, it’s certainly no pushover.

The bosses are a particularly masochistic treat, with multiple phases and a huge variety of attacks that cycle randomly. Facing one is a long, taxing process, and the exultation when you’re finally victorious can feel muted by the slog it took to get there. These have many forms, although most are humanoid, and each battle is a gargantuan undertaking as you learn their attack patterns and study their timing. Another main criticism, rather disappointingly for a next-gen-only game, is that the frame-rate struggles from time to time. Harkyn moves quickly and the detail level is high, which contributes to occasional slowdown. It’s often barely noticeable, but it does happen. The voice work is also hit and miss, with bad lip-synching and iffy conversation animation, but this is mostly forgiveable. Graphically, it’s solid, even if it does lean a little too heavily on brown, red and gold in the colour scheme. The atmosphere, though, is palpable. While the checkpoints and ability to pause the game to change equipment makes things a little less oppressive, there’s still a definite sense that you’re walking into Death’s domain.

Lords of the Fallen knows exactly what it wants to be, even if it occasionally has trouble getting there. It has derivative elements, undoubtedly, but they’re clearly meant as homage and built upon rather than outright aped. It’s not a showy, flashy, trailer-friendly game (Harkyn is no poster-boy despite his gnarly face tattoos), and it’s not going to set the universe aflame with its functional, stock storyline – but it is immensely compelling all the same. Dark, brutal and challenging, Lords of the Fallen is a surprisingly deep and playable game, and could be one of this year’s most promising new IPs.

A new IP from Deck 13 and City Interactive that doesn't hold your hand, but won't slap it for failure either.