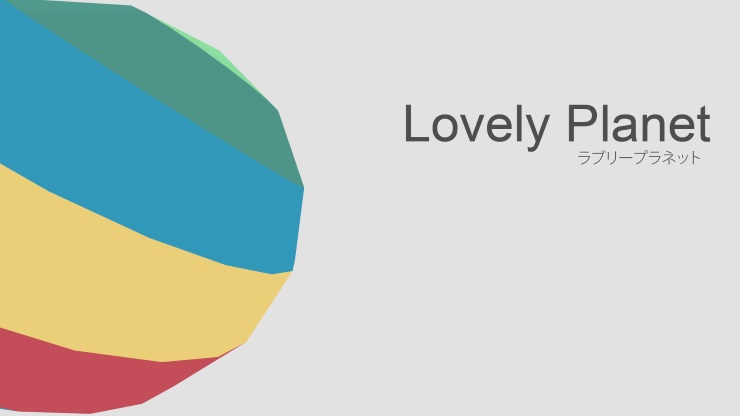 There’s a lot to be said for simplicity, especially in video games. We live in an era where AAA titles like Call of Duty, The Witcher 3, and Fallout 4 add layers of density to core ideas until the end result is an experience that may well be, at times, mind-blowing, but is very rarely simple. While you’re busy deploying remote controlled drones and bounding around a battlefield in your fancy exo-suit, setting a noon-wraith alight with Igni or repainting your power armour in post-apocalypse Boston, what you’re not doing is relaxing, feeling the moment and appreciating the simpler things in life.

Lovely Planet aims to provide an antidote to all that confusion and stress. Well, the confusion, at least. You’re probably still going to feel the stress. It’s a first person shooter that is exactly that: you are a pair of hands with a stick that shoots projectiles, and you are tasked with shooting those projectiles at things, often very quickly and while concentrating on half a dozen simultaneous environmental hazards.

It’s incredibly stripped down, dropping you into a world bereft of textures, shadows and much actual imagination. Colours are vibrant, the looping music will eventually drive you to mute it or risk developing either an involuntary tick or homicidal tendencies, and the level design uses the whimsical atmosphere as a kind of camouflage to conceal its bloody-minded sadism. And yet somehow, it’s very, very compelling. In the tradition of such game-based self-flagellation as Super Meat Boy, Lovely Planet asks nothing of you other than that you repeat a seemingly endless succession of soul-crushingly hard levels until you achieve a sudden zen-like state of superhuman skill. Or rip off your own scalp in frustration – you know, whichever comes first.

Your stick-gun fires big square purple bullets that travel surprisingly slowly towards enemies. Given that all the enemies are stationary, you’d think that would make things easy, but it doesn’t. For a game so cheap and cheerful, Lovely Planet has an awful lot of ways to kill you. If you get hit by an enemy projectile, you die instantly. Fall off a cliff, touch a red blob, mistime a jump, or reach the purple pole that signifies the level’s end without killing every single baddie, and you die instantly. It wants you to die, but unlike some; it doesn’t want you to quit. You get the feeling it’s not trying to beat you; it wants you to learn.

And this is facilitated by being incredibly simple. Enemies don’t move, the layout of an individual level never changes, and each one can be completed in a matter of seconds if you get everything right. Controls are as straightforward as they can be: right trigger shoots, left trigger jumps, left bumper locks-on, and X returns you to the start. You’re graded in stars like a mobile game at the end of each level, and you can shave seconds and milliseconds off your time with each run of a level by memorising everything. It’s a speedrunner’s dream, and one that delights in your accomplishments. However, such simplicity won’t appeal to everyone. Indeed, there are times when it’s all a bit too “dialed back”. The aesthetics, for instance, are repetitious to the point of irritation, while the aforementioned music is enough to send you over the edge. It changes from area to area, but not from level to level and, as a result, you won’t hear more than half a dozen different tunes in around a 100 stages.

What Lovely Planet excels at, though, is making you feel like a giant when you nail some of its trickier later stages, either for the first time (which is no mean feat), or in subsequent runs when you’re simply trying to improve on your score. The first time you leap across a set of floating stepping stones, manage to survive projectile attacks from enemies both in front and behind, and land safely having destroyed the baddies and taken out a bouncing bomb that would have instantly killed you simply by touching the floor, you’ll feel like a god – despite the fact that it has probably taken an hour of swearing, death-threats, and teeth-shattering repetition to get there. But hey, you wanted simple, right?

Lovely Planet is deceptively hard and surprisingly time-consuming, but its reliance on simplicity may divide opinion.