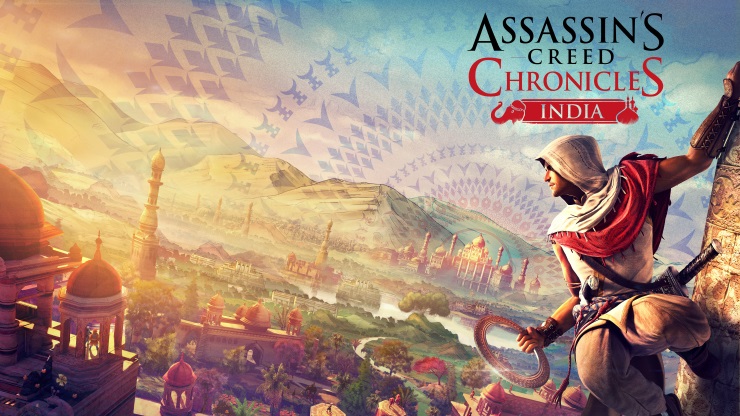 Following on from China, Assassin’s Creed Chronicles: India re-purposes the free-running cloak-and-dagger shenanigans of Ubisoft’s yearly cash-cow into a 2.5D action-platformer in a vein not overly dissimilar to one of the franchise’s original inspirations, Prince of Persia, and certainly similar to the fantastic Mark of the Ninja.

Dropping you into the shoes of Kashmiri assassin Arbaaz Mir (previously featured in the comic, Assassin’s Creed: Brahman) around 300 years after Shao Jun’s adventure, the story begins the way a few of the main games did, with the hero on his way to some kind of tryst with his lover, Princess Pyara. There’s no awkward quick-time-event nookie here though, just a tutorial introducing you to Arbaaz’s unique repertoire. Equipped with chakrams that ricochet from surfaces, smoke bombs, and noise-making darts, Arbaaz employs different tactics to achieve the same goals as his predecessor. Regardless of which macguffin you’re chasing (this time a Piece of Eden called the Koh-i-Noor), the onus is still on either sneaking past or murdering patrolling guards, and circumventing fairly straightforward environmental puzzles to get from A-to-B. Your rope-dart lets you cling to certain ceilings, affording you another way to avoid patrols, yet India still manages to be occasionally incredibly frustrating.

Sadly, it’s not frustrating because of any direct challenge, but because, like China, it comes a little unstuck where the stealth and combat is concerned. While guards have a limited cone of vision (you can stand right in front of them as long as you’re at least twenty feet away) and set patrol loops, every now and then their ability to spot you beyond that cone of vision borders on the psychic. Of course, you can always run away and wait for the alert timer to expire, but it’s when you get caught that it all gets messy. Combat is a bit stilted and relies on the same parry/rollover system as before. You can only take a few hits in the early game and there’s so much going on (you’re often getting shot at and stabbed at the same time), so you’ll see the word “desynchronisation” a lot. It gets a little more interesting later, when you unlock the “Helix Glitch” and are able to activate a short-term insta-kill hyper mode, but it’s mostly useful when you’re forced to fight, and when you’re forced to fight is when it’s the least interesting.

It works best when you’re traversing the gorgeous environments, looking for hidden secrets, and finding clever ways to exploit the mechanics. For example, guards can’t climb to reach you, so you can force a stubborn red-coat to move by dropping into his cone of sight and then retreating to a higher ledge and sitting still until he gets bored and decides he hallucinated you. Certain mission segments call for you to run from or chase after targets, and these areas are the most fun.

India uses the traditional art-styles of its setting to create a truly captivating aesthetic. Tiny swirls and delicate, intricate patterns dance above open flames or add decorative flare to clouds of blood, while everything has a sun-kissed or moon-brushed sheen, slightly removed from, but as effective as the watercolour art style of China. It’s hard to ever fault an Assassin’s Creed game for art or sound design, and India is no exception. Cutscenes are still mostly static, and while Arbaaz lacks the intrigue of Shao Jun, he just about makes up for it with the kind of roguish charm for which the leading men of the franchise are well known.

The speed run-friendly nature of the levels, and the scoring system (gold, silver, and bronze) will entice many people back after the relatively short campaign ends, making it well worth checking out for fans of the last game. As a spin-off series, Chronicles still has legs. Despite a less-interesting protagonist, India is an improvement on China in several ways – the new gadgets make a difference and the minor advancements in navigation techniques open up the levels – which makes me very hopeful for the finale of the trilogy, set in Russia.

A good second stab for Ubisoft's latest spin-off series, India makes up for what it lacks in excitement with visual flare.