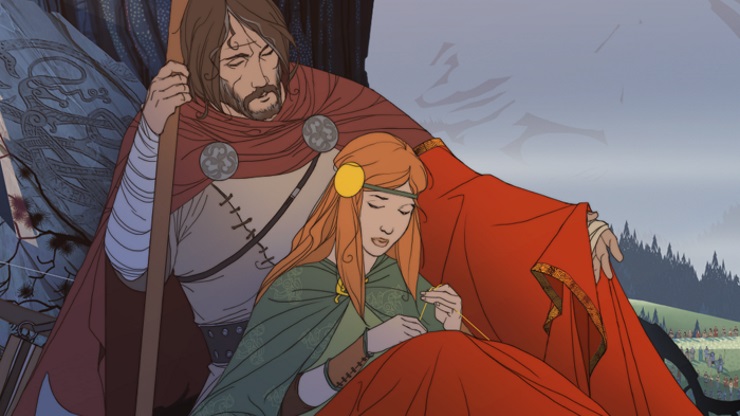 The Banner Saga is a tough slog through a bleak and brutal world, one where even the toughest of men fall, and even the closest of allies are only a step away from certain death. Even in the age of player choice, never have I had to make so many tough decisions that impact every character I am responsible for in such a harsh way. A click of a dialogue option can be the difference from saving many lives or taking them away, and at times those decisions weighed heavy on my mind. The tales in which you are a part of will blow you away; the bonds of friendship and family, the grave tragedies of war, and the excitement of victory on a foggy battlefield all meld together to create one of the greatest video game stories of the last few years. Even two years on from the original PC release, it still stands up as a must buy.

“The Gods are dead”, it says – the opening line sets the tone instantly, and you are made aware of how desperate things have become in the wake of this devastating turn of events. The humans and the Varl (a race of giants with horns that resemble the Vikings) have formed an uneasy alliance, and face a common threat in the name of the horrid and murderous Dredge: an ancient race of beings that will kill anything that stands in their way. The story is incredibly well written, but it is how you interact with others in the face of adversity that makes The Banner Saga so good. Little choices you make impact you greatly, and it does a great job of putting the pressures of leadership on your shoulders. Without ruining anything, there was a point when playing as Rook (one of the humans) where I had to decide the fate of a drunkard within my ranks. Through the long and arduous journey to Frostvellr, he was one clansman that refused to behave, even after a stern talking to. I had to decide whether to not to banish him, let my people exact some ‘civil justice’ or simply forgive him and hope his future actions don’t put the whole of our group in jeopardy.

It may have been a small problem at the time, but even the smallest of dilemmas can result in your closest of allies meeting a grim and vicious end. There were other times (not this one) that saw death take away my friends, and it was in these sorrowful moments that I saw the best and worst the game had to offer. Stoic has built a highly personable game that makes you care greatly about your army and your soldiers, even if you aren’t comfortable with watching these events unfold.

It is not just the narrative where The Banner Saga shines. If you aren’t familiar with real-time strategies, I still implore you to play because it makes sense of the intense and involving story. Being responsible for every swing of the blade or pull of the bow means you feel a solid connection with the characters that fight for you in battle. The typical features of a RTS are all here, and the element of chance plays a role, but it isn’t as much of a deciding factor as it would be in something like a Warhammer title. There are different classes and each has a different advantage in battle. For example, Warriors are Varl that deal a great deal of damage to both health and armour, and Archers can fire at great distance and hit multiple enemies on the same turn. It is wise to play with every class in battle to work out which works best. I found the Warriors to be hugely successful in destroying the larger Dredge, and the Raiders did a great job of wearing down the humans that opposed me. As the game progresses, certain battles did seem unfair as opposed to simply becoming tougher. The difficulty became gradually harder as the game progressed, which is perfectly normal, but the occasional battle seemed to feature turns where I was only able to wear away a point at a time on even the weakest of enemies.

There are many RPG elements and these give each characters more depth and opportunity for progression. With every victory and ‘good deed’ you do, you will gain renown. This is a form of in-game currency that can be used to buy supplies for the road and items that add extra points to certain weapons and armour. You can also upgrade your one of your five main stats, but the two that help give you the edge in battle are willpower and exertion. For every attack, willpower grants the chance to take away an additional point away from the enemy’s armour or health, and the more exertion you have means the more willpower you can use in any one turn. Having high armour stats means it’ll take longer for your opponent to wear you down, and health is, well, health: the more you have the longer you survive. Break is the final stat, and the better it is means the more damage you can deal to your enemy’s armour. It would be wrong of me not to mention the stunning job that Stoic has done with the art style and music. Its bold and bright colours feel very much like the golden age of Disney and the detail in the illustrations compare to the wonderful games of the Broken Sword saga. The music bellows like any great epic; the moving score helps to create its bleak and emotional world, and its rapturous notes elevate your battles to high levels of drama and significance.

The Banner Saga is a fantastic game that manages to pack so much into its campaign. Whether you’re after a great story or addictive gameplay, I believe that you’ll find it here. Although there isn’t anything to do after the main story, and some of the battles can leave you frustrated, The Banner Saga is certainly something you need to play. Now, finally, it’s made the move from PC-exclusive to console game, and it’s just as special as ever.

Read our review of the PC version.

Some frustrating battles.
Nothing beyond the campaign.

An impressive RTS that offers a well written story, magnificent visuals and a stunning soundtrack that will stay with you long after playing.