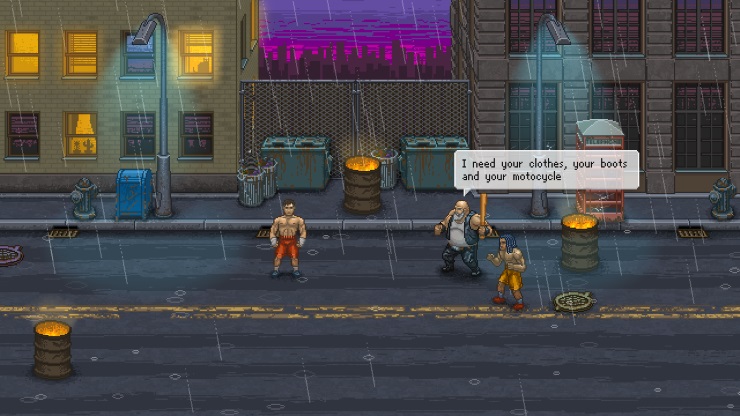 Imagine a game that’s part point and click and part work-life simulator, then incorporate tropes and characters from your favourite 90s underdog martial arts films and games. It’s more than likely that the image forming in your head is quite like Punch Club.

In the past the protagonist’s father was killed by a mysterious man in black over a mysterious medallion (typical MacGuffin), several years later you’re all grown up and considering revenge. To get it, you’ll carefully manage your work life, food intake, exercise regime, and fight your way through several comically named brawlers until you reach the very top and find the truth behind your dad’s death.

Punch Club oozes nostalgia from every pore. It’s presented in a lovely pixel art style with gorgeous chunky sprites and well detailed backgrounds. As you explore the locations you’ll spot nods to many old action films like Stallone’s Cobra and Van Damme’s Bloodsport, shows like Teenage Mutant Ninja Turtles, games like Street Fighter, and Mortal Kombat and throughout you’ll meet characters that are parodies of those from popular 90s films. They’re all a nice touch.

But in many ways this should really be called “Numbers: The Videogame”. You have to work; and working generates money. Money is used to buy food; which in turn raises your health and food levels, which is then used to train. Training makes your numbers for strength, agility, and stamina go up, and when they have reached adequate levels you can take yourself into a fight, which plays out as an automated fight predicted by a random number generator (RNG). Increasing your stats gives you a better chance of the RNG going in your favour. Winning fights grants talent points to spend on new talents which also increase your chances with the RNG. So, it’s numbers fueling numbers, which in turn fuel more numbers and, well, you get the point.

The thing is, in the early stages all this is an awful grind. The balance is dreadfully difficult to get down until you’ve managed to purchase a few talents to help keep your training levels stable. It gets even more frustrating when you lose fights that your stats say you should win. Also, early on you’re given the opportunity to purchase sports equipment so you don’t have to spend money to use the gym, but these items aren’t cheap, and the minute you have enough money to buy one you’ll find yourself mugged on your way to spend it and will lose half of it as a result, it’s not so bad the first time, but when it happens the fifth or sixth time you’ll be fortunate not to shatter your teeth as you grit them in fury. As it opens up it does improve, you’ll win more fights, gain more training points from exercise, and cash will come by easier. You’ll find little side quests and other branching narratives that can distract, But even in the late game the overbearing grind still persists. You’ll still need to repeat routines regularly until you’re ready to take on bigger and better opponents, or rather watch yourself take on bigger opponents at least. It’s still a compelling experience like any management style game is. You’ll grin at the references and punch the air when you’ve finally managed to beat a difficult fight, but this is offset by moments where you’ll be shouting at how unfair RNGeesus can be.

If you can put up with the ever-present grind and can see through the frustrating moments then you’ll have a good time playing through Punch Club’s celebration of 90s action, if not then you may find yourself looking for a new keyboard, or worse, a monitor as a result of working through game related anger issues.

While Punch Club has a great hook, it has a real tendency to make you cross.