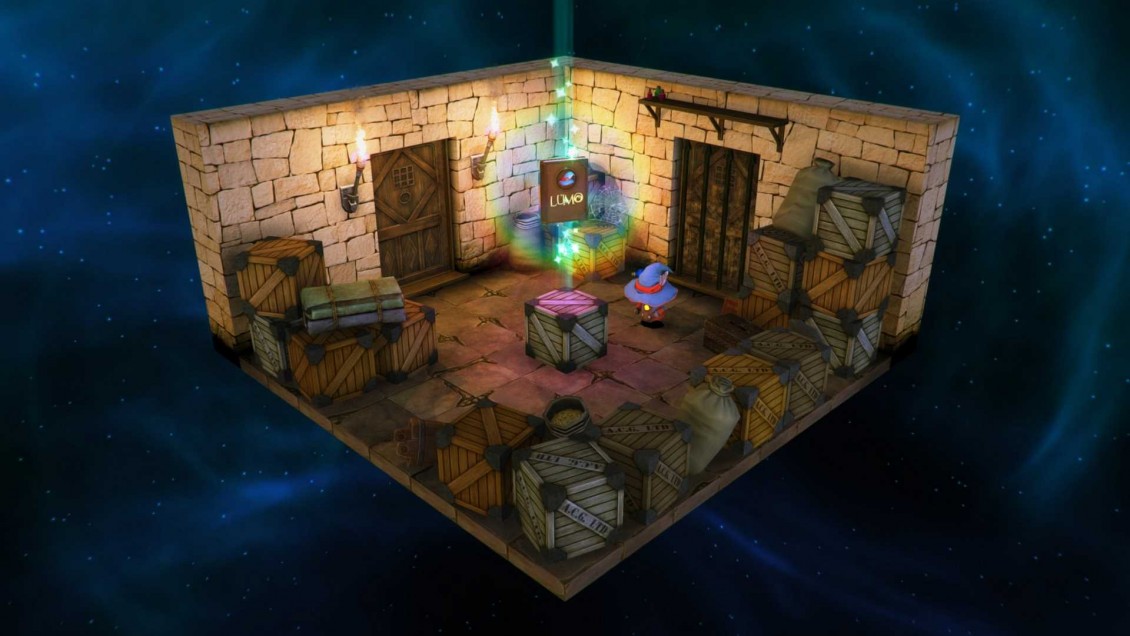 Right from the start of Lumo it is clear that developer Gareth Noyce has created a love-letter to games from the past. The loading screen harkens back to the heady days of the Spectrum (without the half hour gamble on whether the game would actually load or not) and continues into a delightful little isometric puzzle adventure game reminiscent of Knight Lore, Solstice, Head over heels, and others of that ilk. Along the way it utilises mechanics from other games of that era, the most striking of which for me was Marble Madness a game I loved when I was younger.

Dripping with nostalgia, you are transported to a strange world with interlocking rooms, portals and secret passages with the task of finding your way out. Exploring from room to room you will have to solve puzzles and find items to help you progress: a key for a locked door; a wrench for a piece of machinery; some soap to clean dirty water! Locating these items will require you to back-track and try different doors to see what is behind them and where they will lead to. When you begin you are presented with a couple of options for how you would like to play: Adventure mode which allows you infinite re-spawns, a map and the ability to save your game; and “Old School” where you have limited re-spawns, no map, and cannot save your progress. “Pretend like it’s 1985” the text on the screen cheerily announces. Next up, you can set your preferred control scheme, which is a useful tool. It’s worth spending some time trying each of the three options so that you settle on the one that feels the most intuitive to you. Picking the correct one is crucial in order to be able to continue deep into the game as the rooms becoming increasingly more complicated and difficult to navigate with insta-death looming with the likes of electrified floors, moving platforms, fiery barriers, and other obstacles.

Lumo is lovely looking, with a chunky, simplistic style. Each room within a zone provides a logical connection to the one previous, but it is quite easy to get lost. Thankfully in Adventure mode you can find maps that will help you to navigate around a little easier, although its presentation is a little confusing at first with no key to clarify what the icons in various rooms mean. Your avatar is a squat little boy or girl dressed in what appears to be a wizard’s hat and robes, but other than a short intro where your character is transported to the world of Lumo at the beginning there is no other means of narrative. The assumption is that you must get back to your own world by exploring, but that is never explicitly stated. There are things to collect along the way such as coins, ducks to rescue and lots of secrets, a few with nods to 80s gaming such as cassette tapes and references to retro magazines. It’s clear this game was made with people like me, who grew up on these types of games, in mind. Unfortunately, for me, it seems that my muscle memory for this type of game is not what it once was, because you see, the difficulty of Lumo is not with the puzzles, which are all fairly straightforward, it is with the style itself. Perhaps my spatial awareness has declined as I have gotten older, but nine times out of ten I failed a jump because of the camera angle rather than the difficulty of the puzzle itself, and after a while, frustration starts to creep in, particularly in later stages when the requirements to complete an objective presents itself as a series of platforming moves spanning three of four interconnected rooms. You fail at the last hurdle and you will need to back track and start all over again. It’s charming at first, but failing over and over again because the game won’t allow you to sufficiently change the camera angle to see the structure of the room in more detail begins to grate after a while.

Frustration with the camera notwithstanding, there is plenty to see and do in Lumo with each zone having a distinctive feel to it. As you progress you learn or find new abilities that will enable you to solve the new problems presented to you and you are always treated to rooms that incorporate new mechanics and ones you have already learned. The drive to explore what is beyond the room you are currently in is strong and it is a game that keeps you coming back despite the annoyances. It’s clear that Gareth Noyce loves video games with subtle and not so subtle references to games spanning decades and there is a tonne of hidden secret rooms which seemingly appear from nowhere. The surprising appearance of new areas has a joyful feeling to it, giving the impression of a developer having fun creating this bizarre little bit of nostalgia and it’s hard not to get swept along with that kind of infectious love of gaming.

A love-letter to games gone past and to games in general, Lumo is a delightful if sometimes frustrating little puzzle platformer.

Interview: Gareth Noyce on Lumo, Classic Games and Striking out on His Own
Evil West | 6 Tips to get you started
Pokemon Scarlet and Violet Legendaries | How to find and unlock Legendary Pokemon
The Devil in Me | How to keep everyone alive
The Devil in Me | How to kill everyone
Escape Academy: Escape from Anti-Escape Island Complete Walkthrough
Escape Academy Take to the Skies Walkthrough
Social Media
SUBSCRIBE
All content copyright GodisaGeek.com
Fonts by Google Fonts. Icons by Fontello. Full Credits here »
Posting....