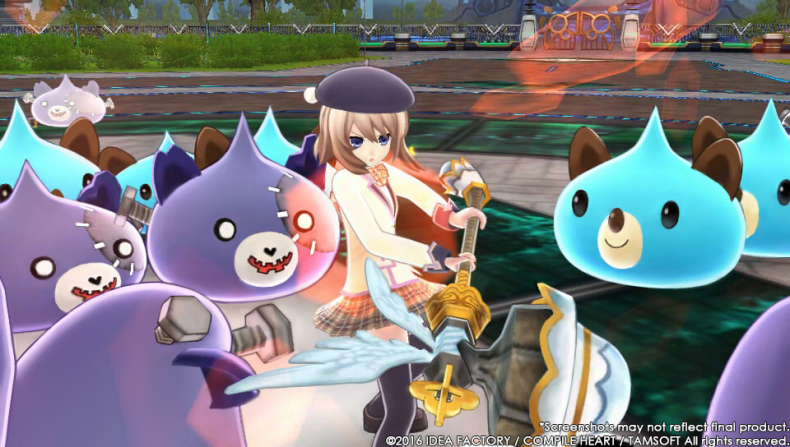 Sometimes it can be hard to quantify one’s enjoyment of a game. There’s something about the Neptunia series of games with their brand of sexualised schoolgirls that’s never sat right with me. MegaTAGmension then is a curious beast for me; the game has practically no redeeming feature, yet there’s something I like about it.

The premise behind this title is that all of the CPUs of Gamindustri are attending Gamicademi, the foremost teaching establishment of their world, but it’s on the verge of being shut down. Once this little factoid is revealed real zombies show up for some reason. This would be a big development in most places, but here the characters are so nonplussed they decide to use the opportunity to film a zombie horror movie and use the fame from it to prevent their school from closing, to say it’s all complete nonsense would be an understatement.

It almost seems as though the longer they made the game the more they decided the story doesn’t matter, with cutscenes practically non-existent towards the end of the second half, and a rather woeful ending as a result of all the characters ‘efforts’. Once it’s all over the sequence that runs throughout the credits is more inventive than the game itself.

It’s sins are numerous, after the typically flashy intro video you’re greeted by bland menus that are functional, but uninspiring. The biggest culprit however goes to the setup screen where you edit character loadouts. Here your characters line up and you flip between them to adjust their gear and apply ability points to improve their stats. But it’s such a long and dreary process, because if the boring aesthetic wasn’t bad enough, the switch between each character carries a loading time, making the process of improving your characters laborious and frustrating. Loading screens between levels (scenes) carry false information on them too; ‘Talk to the characters in the menus and shop!’ it states, but there is no actual interface to actually do this. You’ll see these loading screens a lot as well, as there’s one from the scene selection to a cutscene, then one from there to the character select screen, then another to a cutscene, then another to the actual bit that lets you play, you’ll be spending quite a bit of time looking at them, and their text is repeated very frequently.

After choosing a scene to play (and being notified of the advised level to attempt it at) you have to choose two characters to take into battle, but their levels aren’t displayed anywhere during selection, so, you’ll have to have memorised what it actually is. You see, you always take two characters into battle, and they have two support characters which can provide temporary healing or buffs. You are then tasked with killing a certain amount of enemies within a set time. Your introduction to this is painful, as in typical Compile Heart style there’s no tutorial, just a long set of screens telling you what the buttons do. It’s such an assault on your eyes that you’ll just want to skip right past it all and work it out as you go.

You’ve got your general jump, dash, light attack, and heavy attack, plus guard, then special attacks using the trigger buttons and then to switch characters you need press L+R+O. As the story trudges onward new characters will join your roster, but they won’t be matched for the point in the story you’re at meaning you’ll need to revisit older levels to level them up, or keep them as a secondary character as they gain XP just from being held in reserve. Generally though you’ll pick one character and stick with them, as switching characters out from mission to mission is pretty much folly. Enemy models are repeated over and over again, with the occasional palette swap, and the combat is sluggish, and not helped by a camera that just does not want to look at the direction you are attacking in, resulting in you swinging wildly at air before being clobbered by an attack that you couldn’t see coming. There is a lock on, but triggering it is so wildly inconsistent and activating special attacks can toggle it off, that you’ll find that most of the time you’re better off just running in and hoping for the best rather than trying in vain to make it work.

So what’s good, then? Despite the constant asset re-usage the graphics are actually quite nice, with solid character models and lovely art in the cutscenes, the music’s ok too. Outside of that there’s a bunch of extra options to aid accessibility such as no damage, killing enemies in one hit and full special move gauges, it’s a move that many games could learn from.

If you can look past pretty much everything the game offers you may find that there’s enjoyment to be had here.