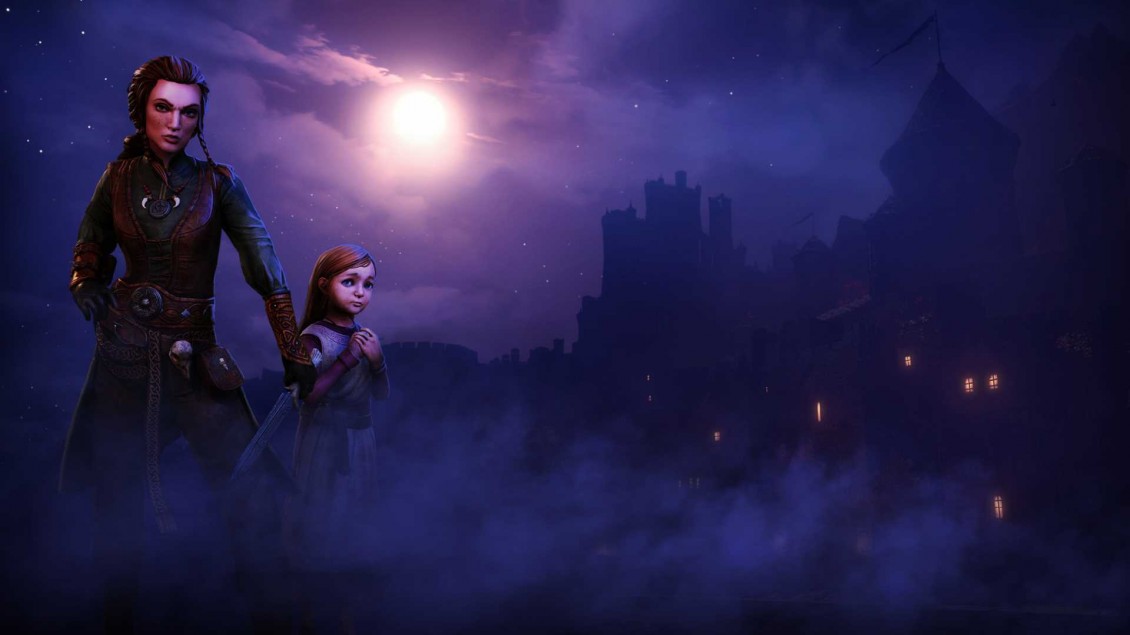 Shadwen is a game you want to love, but no matter how hard you try; you can’t. The physics, artwork, and ideas at its core should make you scream with delight because they do something rarely done: they push the boundaries. Unfortunately, the dreary environment, dreadful AI, and repetitive action drown out the nifty time manipulation mechanic and ruin your enjoyment of something that could have been so much more.

The titular Shadwen is a female assassin on her way to kill the king. Along the way, she bumps into Lily, a small orphan girl about to be reprimanded by a couple of guards for stealing an apple. After your first interaction with Lily, you embark on a journey together where everything you do impacts poor Lily’s perception of you. It does little more than make you feel bad for knifing every Tom, Dick, and Harry between the shoulder blades, and it never really affects the way you play.

Lily is a pain in the ass. If the both of you don’t get to the door at the end of the level, you can’t go forward. There were countless times I tried to get Lily to follow me, or at least keep up with me and she had crawled up in a ball in the middle nowhere. I wasn’t sure if it was because she didn’t approve of my killing and felt uncomfortable being with me, or whether it was just bad AI. After the four or fifth time, I stopped trying to work it out; I just did all I could to get her to the end of the level before I lost my temper. One of the smartest elements is the ability to manipulate time, even though it takes away the risk of getting caught – or even the worry of death. You can rewind time so if you get shot, stabbed or spotted, you can press the L1 button to return seconds before your blunders. Like Superhot, time freezes and it’s a nice addition to the physics because it allows you to plan your attacks and take things a little slower. When time freezes a press of the R1 button moves time once again, but at a seemingly slow pace, and when you’re waiting for a guard to pass by it can feel like forever.

Your main tool is a grappling hook. You can use it to swing from ledge to pillar to lamppost, and you can also pull crates, barrels, and hay bales to distract guards. It works well about 50% of the time, but it struggles to ever fulfill its potential. The swinging mechanic is painfully unrealised, especially when games like Uncharted 4 have done it much better. You can also fire at an item you want to pull from where it sits, but instead it makes you swing from it; it’s pretty ridiculous when you’re lying on the floor, flailing around while you’re launched into a guard or two. I also fired my hook at a crate in front of two guards, pulling it slightly to distract them and they fell to the ground dead. AI is a massive problem and it lets it down a multitude of times.

There were countless moments where I couldn’t quite believe how awful the enemy AI was. Once, I hid behind a hay bale and pushed it into the face of a guard, but he never flinched or wondered why something so big was moving on its own accord. I pushed a barrel off a ledge into the path of two guards and they too remained still. This happened far too many times and ruined many of the stealth elements I had looked forward to experiencing.

The artwork in the scenes between levels is gorgeous; lovely hand-painted scenes and portraits give life to Shadwen, but when playing, the lifeless environments begin to feel exactly the same as the last. There is the occasional change in setting, but for the most part it remains monotonous and dull.

Ultimately, it doesn’t feel like a finished game; every issue wouldn’t need to exist if Frozenbyte (the same developers as the wonderful Trine) spent a little longer developing it. I ended up stabbing every guard because it made the game go by a little faster and I had no inclination to hide any bodies as it slowed everything time. It’s such a shame Shadwen falls short because it could have been such a smart stealth game.

Review code provided by Frozenbyte.
Liked it? Take a second to support GodisaGeek.com on Patreon!

A disappointing stealth title that could have been so much more, giving you little more than a few hours of enjoyment before everything begins to grate on you.