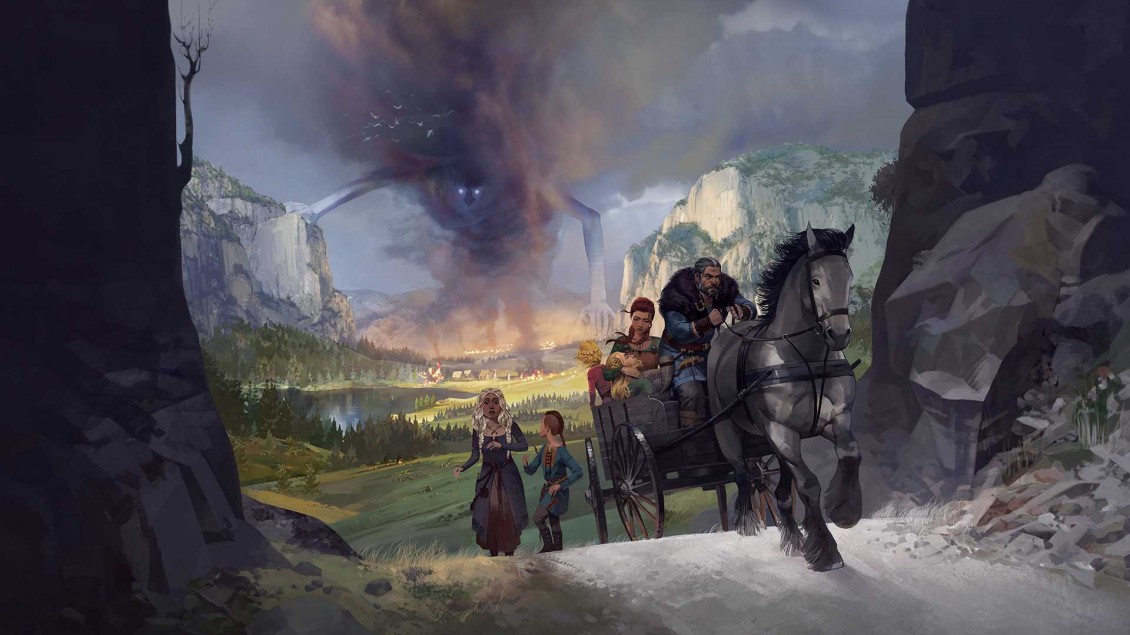 FATED: The Silent Oath provides a different kind of VR experience than the majority of titles out there, offering a dialogue heavy story that’s more concerned with world building and immersion than VR gimmickry. And it makes a fine effort to establish its mythology, but two equally awkward control schemes offer a choice between nausea or confusion – and occasionally both – and simple visuals and puzzles lead to an experience that lasts just over an hour. It’s not the best fate for developer Frima Studio’s first VR title.

A charmingly cartoon aesthetic greets you with a warm and bright colour palette, and although details are austere the Warcraft meets Skyrim (on low settings) style isn’t unattractive. Animations are less impressive, with stiff, unnatural moments, matched in tone by an extensive voice cast that lack any emotion at all. It struggles to completely immerse you. Waking on the back of cart pulled by horses, with the 3D sound doing a great job of portraying the environment, only to have your family speak to you with flat uninterested voices about the fate of the village you barely escaped from, manages to both impress and underwhelm you in a matter of minutes. The script isn’t bad, at least, and as flat as the emotion behind the voices are, they manage to match their characters splendidly.

Of course there’s a fair amount of cliché in the narrative. You are mute and suffering from amnesia due to a bargain you made in order to stave off death, but mechanically this works rather well. You can respond to questions by either nodding or shaking your head when prompted. It’s a neat form of input that does a great job of pulling you into the world and its characters, but you’ll have to find who’s talking to you first, which can prove a little problematic.

You’re offered two control options when you start: rotation snapping or free movement. With either option you’re still restricted to controller-based (or wand-based with the Vive) movement, but with free movement, turning whirls your camera around to gut wrenching effect. Snap rotation works slightly better, or at least slightly better at avoiding pools of vomit all over your floor, by shifting your view sharply, but it rarely lines up with precisely what you want to look at, resulting in a tedious shifting around the environment to finally look in the right direction. You’re sure to find one of the two options works better for you, and the fact Frima Studios included both is a testament to them trying to make it work, it’s unfortunate that it doesn’t, and it constantly takes you out of the experience, either because the movement is unnatural or because you’ve got to whip off the headset and run to the bathroom. Once you’ve come to terms with moving around, the rest of the experience is over with inside of two hours. After a couple of rides on horse and cart, some hunting in the forest, and some light exploration and puzzle solving, it’s all over. It feels more like a demo than a full release, and although there’s some enjoyment to be had with a particular section through a mountain pass, and the hunting can raise a smile, the story is severely underdeveloped and tangential to your character.

There’s clearly a lot of potential here, though. The Norse mythology behind it is intriguing, and it’s pleasantly surprising just how attached you can get to your digital wife and daughter. The minimalistic locations don’t help sell the world but a wonderfully fast frame rate helps establish a strong feeling of presence within it. And this is supposedly episode one of a multi-episode series. If lessons are learnt from this outing, the next one could be a treat.

Its narrative is lacklustre and it’s over with far too quickly, but FATED: The Silent Oath has moments of strong immersion within a well-build but underused world.