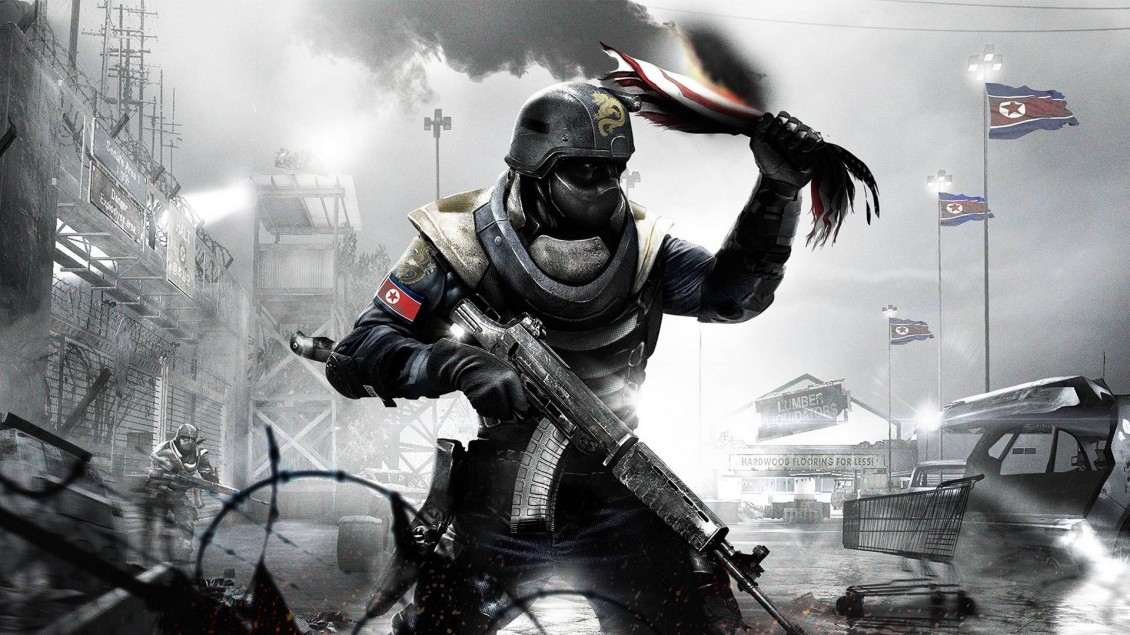 Silent protagonists have their place, right? In an RPG for example, where you’ve got dialogue choices to make up for it, or maybe in BioShock where you’re essentially a tool for the bad guy for the entire game and you don’t ever really need to talk to anyone. But when someone thinks you’re a Korean spy in a futuristic, totalitarian Philadelphia and believes it with such vehemence that she’s willing to cut your actual nipples off, being a silent protagonist makes absolutely zero sense. Beyond saving the devs a bit of time and money, it’s actually a bit of a stupid conceit.

This wasn’t my first alarm bell when playing Homefront: The Revolution – that came during the mean-spirited, gratuitously violent opening cutscene – but it was the first one that made me say “Oh. So it’s that kind of game.”

Usually I’m a bit of an apologist (read anything I wrote about Destiny last year), but there are certain things you can’t easily turn a blind eye to, and so many of them are featured in The Revolution. The original game, for its faults, had a fairly decent storyline and at least felt different to what was around at the time. Sadly, this sequel does not. It’s painfully generic at times, which would be forgivable if the quality were sufficiently high, but it suffers there, too. Set after the first game, The Revolution sees you step into the shoes of Ethan Brady, a blank page of a character recruited by the Resistance, a group of Guerrilla fighters attempting to take America back from the hands of her North Korean occupiers. Recruited by a bunch of characters who are brutalised 30 seconds after he meets them, Brady is then rescued by Benjamin Walker, the legendary freedom fighter who promptly gets arrested, leaving you to team up with grizzled war veteran Jack Parrish and his psychotic second-in-command, Dana. These two, and indeed everyone else you meet, are such by-the-numbers characters that you automatically dislike them, especially when Dana constantly refers to violent, life-or-death firefights as “fun” and swaggers around like she’s ready to shoot everyone in the face for kicks.

The move to open world isn’t necessarily a good one, either, as developer Dambuster Studios has followed an established template to the letter, to its detriment. You assault strongholds and “strike points” to establish footholds, claim side missions from job boards, and follow the big yellow star to each story mission when you’re bored of the distractions. There’s nothing going on that we haven’t seen a hundred times by now, and the missions themselves are devoid of anything approaching originality. It’s a shame, too, because the game world is a decent size and has a dilapidated beauty vibe going on. There are stealth sections that require you to avoid patrols and run and hide if you get seen, but they’re always easy to get out of and so they don’t add a great deal of tension. Likewise, the attempt to break up the interminable walking with hundreds of identical scramblers hidden around the city falls flat, as the handling is loose and the physics non-existent.

If there’s a saving grace in the campaign it’s the weapon modification system. Weapons are mostly cobbled together from bits and pieces, so (by pressing up on the D-Pad) you can customise them on the fly, transforming a pistol into a submachine gun, for example, or instantly switching out scopes, suppressors and under-barrel attachments to give yourself the upper hand in a firefight. It’s a system that works reasonably well, but as with any FPS, you’ll eventually find a couple of guns you like and stick with them. You’ll probably find a shotgun works best, too, as the enemy AI is set to either “duck for ages then run for cover for no reason” or “charge blindly at player”. Enemies seem to have no pattern or real science to their movements, while allies you recruit in the field are happy to catch all the Korean bullets for you by running headlong into oncoming fire. Occasionally, they disappear completely. Even if the developer was rushed and underfunded (and the development process for this game is well documented, and doesn’t seem conducive to making a good game), there’s no excuse for a game to be this buggy. Twice I spoke to NPCs who were just heads sticking out of the floor, the sound is either out of sync or cuts out altogether (great fun when a sniper is shooting you repeatedly in the arse and you can’t hear the shots), and characters have an unsettling tendency to spend an entire conversation staring at the spot where you should be, as opposed to where you are. The CryEngine used to be the pinnacle of shooter engines, but you wouldn’t know it from looking at this, thanks to a woefully inconsistent frame-rate that crawls at times.

We also tested the PC version on a 970 with 16gb of RAM and an i7 processor. You can see footage of that version in our video review chat, and it’s obvious from that how much better the PC version looks – as you’d expect. However, like the PS4 version, there is a freeze of a few seconds after every autosave, and the frame rate is wildly inconsistent. Just walking around it will drop for no reason, and although on our rig we kept it above 30fps consistently, we thought it worth noting. Ultimately, if you are buying this game, the PC version is the one you should be going for.

It’s not helped by the clumsy action. The aiming is imprecise, and you can easily unload half a clip at an enemy and miss them, or think you’ve missed them and they drop down dead. When you do hit something, the shots lack impact, which is all a bit unsatisfying. It doesn’t improve in multiplayer either, when lag often gets the better of you. There’s just a lack of weight to the combat all round.

That said, the multiplayer contingent (Resistance Mode) works better, if only because it’s always more fun to play with other people. It follows a more straightforward mission structure, giving you objectives to complete with a very black and white “Attack or Defend” divide and then asking you to extract safely when you’re done. It feels a more natural way to play, even though the repurposed campaign environments are too vast. Completing missions earns XP and cash to spend on skills and gear respectively, but again it’s nothing you’ve not done a thousand times over in the last few years.

It would be nice to say that Homefront: The Revolution had the potential to be something greater, but sadly that may not be the case. It’s so incredibly grey and generic that it’s hard to imagine that there were many original ideas during the development process. As a result, it was kind of doomed from the start, and this just isn’t the year – or indeed the generation – to leave your A-game at home.

If you’re thinking of buying Homefront: The Revolution, use these links to support GodisaGeek.com:

Weapon modification system is cool
Multiplayer has its moments

Homefront: The Revolution feels like it's arriving a decade late and under-dressed, and although it reaches for the heights, it never approaches them.

Chorus is a different breed of space shooter | Hands-on preview
Inkulinati tips | 8 helpful tips to get you winning quickly
Inkulinati best unit guide | Pick the right units for the job
Dead Space | How to get your deluxe edition suits
How long to beat Dead Space (2023)
Forspoken | How to get Frey’s cat familiars
How long to beat Forspoken
Social Media
SUBSCRIBE
All content copyright GodisaGeek.com
Fonts by Google Fonts. Icons by Fontello. Full Credits here »
Posting....