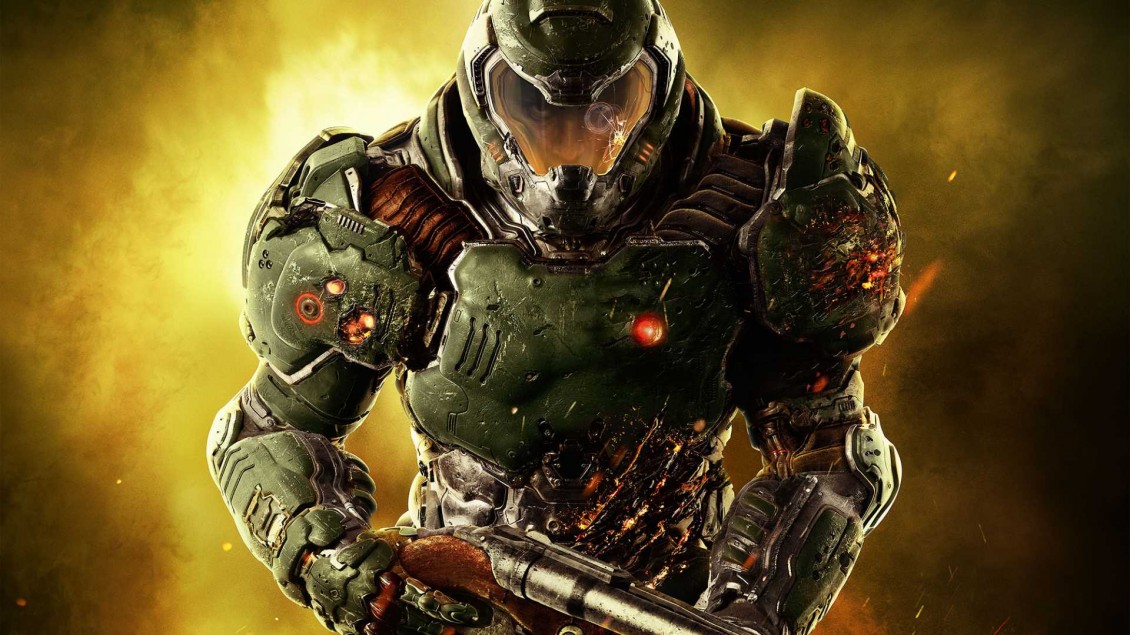 Doom is death, the act of killing, the art of killing, a beautiful death dance; circling, strafing, retreating, attacking, shotgunning and chainsawing, nothing else matters and it’s beautiful.

The original Doom has become such an important part of video game history that it seems an almost impossible task to successfully resurrect it, but that’s exactly what id has achieved here, reinvigorating the essence of their original masterpiece, eschewing the direction of Doom 3 in favour of taking that beautifully pure system of killing from the first two games, that fiendishly addictive loop of attack and retreat and updating it to satisfy modern audiences.

The biggest update in this all-new Doom is the glory kill system. At first glance it seems like an unnecessary intrusion to the flow of combat but, wisely, glory kills only last for a split second, just long enough to satiate your bloodlust with a hilariously gory animation before showering you with all-important ammo and health. What at first seems like an excuse for hilarious slow motion gore is in fact a beautifully balanced addition to the classic combat system. Health and ammo pickups are finite and when your back is against the wall, as it will be most of the time, the glory kill system forces you to go on the offensive, adding to the tension, forcing you to know your enemy, attacking weaker demons in order to recuperate enough ammo and health to take the fight to the larger enemies.

All the old favourite enemies are here and it’s fair to say that, taken on their own, they probably aren’t the smartest bunch you’ll find in a game but, united together and thrown at you in meticulously well-planned packs, they prove more than enough to kill you over and over again. On harder difficulties they’ll force you to know your weapons well, think tactically and plan your movements, just like the Doom of old, on the face of things simple and brutal but in actuality a satisfyingly strategic affair. Facing off against multiple Barons of Hell, blasting a Hell Knight with your super shotgun until you bring it to its knees and bust its skull open, jumping from a ledge and pulling the eye out of Cacodemon in mid-air, it’s breath-taking, addictive, cathartic stuff. Levels may, at first glance, seem pretty generic with all the usual boxes ticked; space station, Mars exterior, Hell and so on. But on closer examination they’re expertly crafted, full of atmosphere, and add exciting verticality to the combat. Split between twisting corridors and large, multi-tiered arenas where the biggest and best battles take place, they are a joy to manoeuvre around and are also absolutely stuffed full of secrets to find.

Indeed secrets play an important part in Doom as uncovering them rewards the player with all-important weapon upgrade points. Upgrades in Doom?!? Don’t worry, the system of upgrading here is simple and unfussy: collect a certain amount of points to add up to two secondary fire modes to your favourite guns which can be switched on the fly during combat, adding the likes of explosive shots to the shotgun, homing missiles to the machine gun and freeze blasts to the plasma rifle.

Besides weapon upgrade points you’ll collect armour upgrade tokens from fallen elite soldiers which boost your Praetor suit’s base stats, letting you choose between health, armour and ammo boosts. There are also optional rune challenges hidden in hard-to-access areas across the levels which bring their own set of perks to proceedings, such as more control during jumps, increased stagger time for enemies, faster glory kills and so on. All of this is added in such a way that you can choose to ignore it if you wish and nothing gets in the way of the most important reason for being here, killing, and oh what killing it is.

There’s a perfectly serviceable story told across the sixteen hours of campaign and if you want lots of detail your codex is bursting with lore on every area, enemy and element of the game, but, with less than ten minutes of cutscenes across the entire solo experience, gameplay is very obviously the star of the show here and id knows it. There are no long periods of exposition, no melancholy walk-and-talks, no staring out across beautiful vistas at a bunch of daft giraffes or pondering the meaning of everything. Doom is about death, killing, blasting faces off at close range, sawing open torsos, blowing limbs off and moving, always moving, a perfectly choreographed death ballet that never grows old.

Even the, frankly unnecessary, multiplayer which was much-derided after the beta, turns out to be a decent mix of game modes with the potential for longevity. Of the six modes on offer at launch, Warpath has provided me with the most fun so far, with two teams tasked with fighting for control of a moving objective. There’s also a clever system of hack modules, unlockable perks which add depth to proceedings. Hack modules include the ability to show the location of your last killer, display enemy health, or show the locations of power-ups, it’s a nifty and addictive system, not dissimilar to the burn cards of Titanfall. Add to this Soul Harvest, where you kill then collect the soul of your enemies, much like a CoD tag match, Freeze Tag, Domination, Deathmatch and Clan Arena, and you have the makings of hours of fun to compliment the main meat of the campaign.

Going in, I didn’t expect much more than an average homage to the 1993 original, at most a decent blast buoyed by the power of twenty three years of nostalgia. But from the moment the campaign’s pre-credits fight sequence cuts to that title screen, rock guitar riffs blasting in the background, it overwhelms with style, humour, and an unbeatable combat system which pays tribute to and builds upon a classic. It may not be genre-defining like its progenitor but it’s easily the best shooter on the current crop of consoles and one of the finest first person shooters of recent years.

Loading times are long, which can grate on higher difficulty levels
Some texture pop-in

It may not be genre-defining like its progenitor but it’s easily the best shooter on the current crop of consoles and one of the finest first person shooters of recent years.