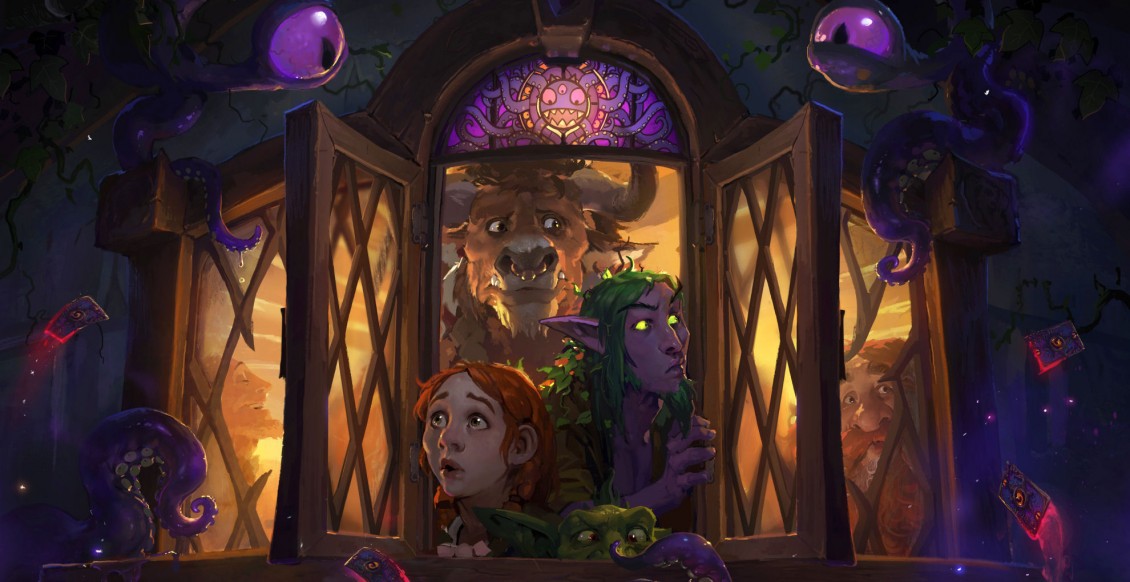 Each time a new expansion is released for Hearthstone, events follow a certain pattern: the first few days are full of enthusiastic players trying out new cards and streamers trying to come up with both fun and competitive decks. In a lot of cases, the longevity of an expansion for Hearthstone is only really in the form of a fraction of the cards released. Eventually people either find a way to spice up tried and tested decks like zoo or freeze mage with a new card or two, or continue playing the same decks. Whispers of the Old Gods not only brings 134 cards to the fray but it also is the beginning of a new era. Before getting into the actual cards and their effects, the new game modes introduced are of utmost importance.

Hearthstone is now split up into Standard and Wild modes. Wild Mode is the same Hearthstone you have loved or hated so far with no restrictions – standard Mode being launched is a big deal for a variety of reasons. I’ve mentioned how it’s not newcomer friendly thanks to the massive amount of cards needed to get up to speed with the current players, but standard Mode only allows you to use cards from expansions released in the current and previous calendar year in addition to the basic and classic sets. This isn’t an ideal solution but it ensures a more dynamic game. When this mode was announced, I already made my peace with my golden Sludge Belchers and Dr Boom. That’s right, Naxxramas and Goblins vs Gnomes expansion card sets won’t be usable in Standard Mode – which is also going to be used in all official tournaments. Having spent a few hours a day everyday since the expansion launched in both Wild and Standard Modes, I’ve had a lot more fun playing Standard. Wild mode still has a lot of the same old annoying decks.

The patch also brought forth nerfs to some widely used classic cards like Blade Flurry and Big Game Hunter. In fact certain win conditions like the Force of Nature and Savage Roar combo for Druids is now useless as the treants summoned don’t have charge. Blizzard says it listened to the community to decide which cards to tweak. Whispers of the Old Gods brings the four Old Gods to Hearthstone. Goblins and Gnomes are out but Old Gods and tentacles are in. There are tentacles everywhere now right from the new game board which is just a re-skinned Stormwind to most of the new cards. The Old Gods have not only entered Hearthstone with a bang but they’ve also corrupted some of the better known minions and spells. C’Thun, the Old God, is a reward given to everyone in their first Old Gods pack. C’Thun is also a major focus in the Old Gods expansion with new mechanics and some great voice acting. He deals damage equal to his attack spread across enemies when summoned and his attack gets buffed thanks to C’Thun cards. More on that in a bit. Then there’s my favourite card of the expansion, Yogg-Saron, Hope’s End. Yogg casts a spell for each spell you cast this game and the targets are chosen randomly. This makes for some really nice random fun. N’Zoth, the Corruptor summons each deathrattle minion that died this game. This allows for some nice deathrattle control decks and N’Zoth has seen a lot of play in Paladin and Rogue decks. The last Old God is Y’Shaarj, Rage Unbound. He puts a minion from your deck into the battlefield at the end of the turn. C’Thun has a lot of cards that buff and modify his own stats. There are decks for each class that focus around C’Thun with minions that buff C’Thun each turn or minions that grant C’Thun taunt. In some games, C’Thun gets buffed so much that just playing him on turn 10 will win you the game based on the damage output he has. What I really liked about the new C’Thun interactions is how they implemented the visual feedback. Whenever C’Thun is buffed or a minion has an effect based on C’Thun’s attack, he flashes for a second on the left reminding you of your impending doom when he is played. This is also usually accompanied by various lines of great voice acting.

It is great to see the Shaman class get some amazing cards like the Flamewreathed Faceless that is a 4 mana 7/7 with 2 overload. Big Game Hunter being nerfed to 5 makes this card even better. Blizzard also pays homage to James “Firebat” Kostesich, the first Hearthstone championship winner with the card Fiery Bat. The corrupted card are interesting takes on old minions in both stats and voice acting. Nat Pagle corrupted is now Nat, the Darkfisher who draws a card at the start of your opponent’s turn for your opponent with a 50% chance. Corrupted Healbot restores 8 health to your opponent on dying. This expansion has seen the resurgence of Murloc Paladin and Aggro Shaman. Even Zoo got an upgrade with Darkshire Councilman and Possessed Villager.

The first thing you’ll notice when navigating through the new interface after the major patch is how much of a focus there is on Standard mode. The Innkeeper nudges you to play Standard by repeatedly mentioning when you do things that would only be allowed in Wild Mode. I like the focus on new expansions but also lament the decision to not allow people to buy the Curse of Naxxramas anymore. I know the cards aren’t “Standard” anymore but new players should not be denied the option of playing through a solid single player Hearthstone adventure.

But I’ll continue to put more time and money into Hearthstone and its expansions and with modes like Tavern Brawl and the new Standard Mode focussing on new expansion, I’m excited to be in a new dynamic Hearthstone world. Tell me you aren’t looking forward to playing Brann Bronzebeard followed by Yogg-Saron to see shit hit the fan as soon as you can.

Review access provided by Blizzard.
Liked it? Take a second to support GodisaGeek.com on Patreon!

More effective than any other Hearthstone expansion so far thanks to the new Standard and Wild modes, Whispers of the Old Gods brings some necessary changes in addition to keeping things fresh for Hearthstone veterans, all while making things more welcoming to newcomers.

You may also like
blizzardhearthstone: Whispers of the old godsiOS