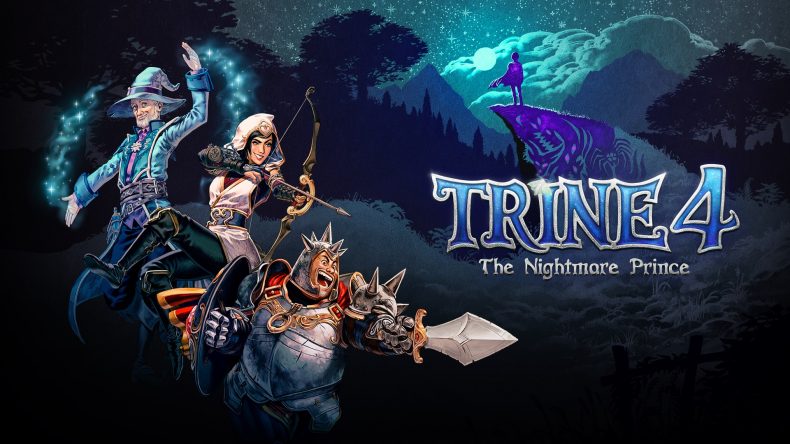 Having been a fan of the Trine series since the first release, I’ll admit to being just a little bit saddened by the fate of Trine 3: The Artifacts of Power. Unfinished, dumbed down, and presented in slightly cumbersome 3D, many predicted that Trine 3 would spell the untimely end of developer Frozenbyte. The disappointing performance of follow up game, Shadwen, did little to dispel those fears.

But the enduring popularity of Trine appears to have saved the day. Re-releases and ports of the Trilogy did better than expected, keeping the dream alive and allowing Frozenbyte to focus fully on the fourth game, The Nightmare Prince, and I for one am glad it worked out this way. I’m also glad Frozenbyte took lessons from Artifacts of Power. The 3D environments are gone, banished to welcome back the 2.5D landscapes of the first two games, the characters have their skill trees back and once again the puzzles are enough to wake up your brain without being overly taxing to the point of frustration.

Anyone going into Trine 4 expecting a shake-up to the formula may be disappointed, though. In fact, thanks to the above reversions, it feels like The Nightmare Prince has taken several very measured steps backwards before coming forwards again. But while it evokes Trine 2 in all the right ways, there are some new elements that feel immediately comfortable.

Playing as Pontius the Knight, Amadeus the wizard, and Zoya the thief, you’ll once more be flicking back and forth between the triumvirate to solve puzzles and overcome obstacles. There’s more combat than ever before in a Trine game, and while Pontius has plenty of tricks up his sleeves what with his magic sword, shield bash, ground slam and charge, the other two can turn their hand to a fight too. Unlocking nodes on the skill trees allows you to beef up all three characters from the same pool of points, which does mean concessions need to be made. But now Zoya can unlock an evasive roll and combine it with a skill that readies one of her arrows instantly, while Amadeus can slam his conjured or levitated blocks and rocks down on enemies, or even levitate the enemies themselves. Sadly there’s not a huge variety of baddies, and even with the extra abilities, combat can sometimes feel like more of a hindrance than a real challenge.

It could be argued that this is partly in service to the story, which sees our trio chasing down runaway Prince Selius, the titular royal whose unchecked magical powers are causing his vivid nightmares to take physical form in the real world. Thanks to the magic that binds them, though, Pontius, Zoya and Amadeus can even follow him into his dreamscapes. My only gripe here is that Trine 4 is already stunningly beautiful to look at, so I was expecting to need new eyes after the dream sequences, but they aren’t really much different from the fantastical “real world” of Trine 4.

Environments are comprised of oversized flowers, giant animals, waterfalls, distant castles, all seemingly presented in as many colours as the human eye can handle at any given time. It flows effortlessly, too, and the environmental puzzles are designed in such a way that you’re rarely stuck for long provided you keep tabs on our heroes’ growing number of abilities and skills. Of course, you can also go into settings and force the game to auto-solve puzzles for you, along with toggling on an easy mode and endless hero respawns. It means even younger children can play, or you can breeze through it as quickly as you like if you just want to drink in the visuals.

But make no mistake, The Nightmare Prince is no more and no less than another Trine. Whether or not that’s good or bad is dependent entirely on the individual, but when you’re hook-shotting across a gap with Zoya, deflecting incoming missiles or slamming through floors with Pontius or wrestling with the sometimes unwieldy boxes conjured by Amadeus, it’s easy to forget that this is the fourth game in the series. There’s comfort in familiarity, sure, but with The Nightmare Prince Frozenbyte take that concept and run with it.

The skill trees do allow you to shake things up a little, though, and the inclusion of a few large-scale boss fights do up the pace considerably now and then. And if you’re into mirror-and-light-beam puzzles or you’re partial to some portal physics, the middle portion of the campaign will keep you happy indeed. Once again, though, the multiplayer feels arguably superfluous. I’m aware that some people come to Trine to play it with others, but I find the inclusion of other players almost intrusive and cumbersome. The entire game can be played and completed solo, and I’ve never felt the need to invite anyone else to share the experience with me.

As is always the case with Trine then, the joy comes from simply playing, from loping through the fairy-tale environments, patting yourself on the back every few minutes at solving a slightly-less-than-obvious conundrum, and enjoying the pure whimsy of it all. The Nightmare Prince is a step up from Trine 3, but doesn’t quite reach the high bar set by Trine 2. Fans of the franchise will rejoice, though, at what is, in every way that matters, a return to form for Frozenbyte’s fantasy adventure.

With Trine 4: The Nightmare Prince, fans will rejoice at what is, in every way that matters, a return to form for Frozenbyte's fantasy adventure.