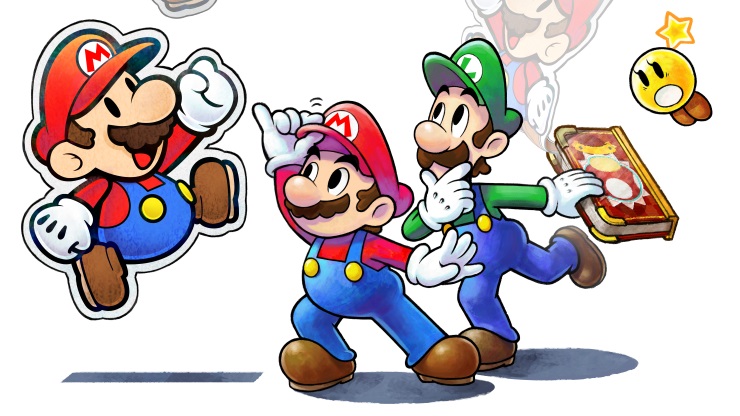 Mario’s greatest strength has always been that he is inherently generic, which has allowed Nintendo to make him into a ubiquitous placeholder character for any purpose that is required. If you need a referee, a competitor, a racer, a mascot or just someone to give your game a little star power (sometimes almost literally) – call the plumber. As a mostly silent character, he is a blank-slate of personality, making him malleable enough to fit into a variety of situations, which is why the Mario & Luigi JRPGs work so incredibly well.

Beginning with Superstar Saga on the Game Boy Advance, these handheld adventures have taken a cue from the parallel series of Paper Mario JRPGs, delighting many with their light approach to the genre, alongside some incredibly witty dialogue that approaches the Mario universe with a playful tone that is as tongue in cheek as Nintendo has ever been.

Paper Jam brings the two JRPG forms of Super Mario into one universe, both figuratively and literally. While investigating the dark basements of Peach’s Castle to fix a draught, Luigi stumbles upon a mysterious book that brings the paper-thin parallel universe Mushroom Kingdom over to the “real” Mushroom Kingdom – including Paper Bowser, his paper minions, and Paper Bowser Jr. With the two Bowsers in this merged universe joining forces, it’s a good thing that Paper Mario shows up as well, especially when there’s a Paper Princess Peach around to be captured… However, there’s only one Luigi, which is probably for the best, as his reputation of being “the forgotten Mario Brother” continues throughout this adventure, in chucklesome fashion. This all leads to the sprite-based Mario & Luigi teaming up with the wafer-thin Paper Mario, using their different abilities to save both worlds from the nefarious double-Bowser menace, and to get home in time to watch the Mushroom Kingdom equivalent of Geordie Shore.

I might have made that last bit up. Sorry.

For those who have never played one of the Mario & Luigi/Paper Mario RPG games before, they have a distinctive turn-based battle system that adds a little more interactivity into the proceedings. While battles do take place on a turn-by-turn basis, each member of your party is assigned to a particular button (Mario is A, Luigi is B and Paper Mario is Y), and all of your actions with those characters are performed using those specific buttons, including battle command selections. When attacking (either with a Hammer, or by jumping on enemies in classic Mario style), the way to do real damage to an enemy is to press that character’s assigned button at a certain point. This Quick Time Event approach to combat is also carried over to avoiding and countering the enemy’s offense. If an enemy attacks Mario, you could press A to jump over them, or if you time it right you could actually press A to jump in a way that lands on their head, doing them damage. All enemies have various types of attacks that are dodged or counterattacked in different ways, and the beauty of these games is finding out the “tells” that enemies use to indicate who they’re attacking and how, while learning the best timings for dodging and countering. As per previous games in the series, these mechanics reward memorisation and reflexes, but there are multiple tutorials and practice modes to make sure you’re ready for practically anything you’ll face. There’s an unexpected depth to Paper Jam’s combat, and as a result it never becomes boring as you’re regularly introduced to new ways to fight and defend yourself, with some battles turning into incredibly clever (and fun) mini-games in their own right.

I haven’t even got into the new Battle Card system, in which you can build decks of cards that offer various bonuses, buffs and debuffs. You can activate up to three cards before performing any battle action, with each card requiring a certain number of Star Points (earned by causing damage to foes) to use. You can obtain and manage multiple decks of cards throughout your quest, and they’re quite handy but not essential. While there are some difficult battles, this isn’t a particularly hard game.

Another superfluous mechanic is the use of amiibo to create sets of Character cards; however, in true Nintendo style, the method of using your figurines is a pain in the Goombas and of course, you’ll need the New Nintendo 3DS or 3DS amiibo reader accessory to even use this function. First, within the 3DS Home menu, you need to erase any game data on your amiibo. You must obtain blank cards in-game that allow you to use the amiibo functionality. Next, you hit the amiibo register menu and touch your amiibo to the 3DS. Then, you have to go into Make a Card, select your blank card to make a Character Card from, and then touch your amiibo onto your 3DS to start a roulette wheel which stops when you remove your amiibo, selecting your random Character Card. You have to touch your amiibo again to save this data. Finally, when in battle, you need to select the Character Card option on the bottom screen and touch your amiibo AGAIN to actually use it. It’s a painful process, especially with multiple amiibo – having to have your amiibo with you at all times just to use these Character Cards is ridiculous. But, you can go the entire game without using them at all, and not feel like you’ve missed anything. Ultimately, it’s a missed opportunity.

There’s a pleasant papercraft-inspired aspect to the environments, with the standard polygonal Mushroom Kingdom, albeit filled with the occasional structure or foliage, clearly made from corrugated cardboard. This aesthetic also inspires a few gameplay aspects. When not battling or travelling around the Mushroom Kingdom, every now and then you’ll take part in various minigames. Some may involve chasing after Nabbit, the rabbit thief from New Super Mario Bros. U, while at other times you might take part in a quiz to test how much you’ve been paying attention to various events in the game. In a regularly occurring series of mini-quests, you’ll also be called upon to rescue dozens of Paper Toads. In particular, these serve to act as manual labour to build absolutely gigantic papercraft statues of some of your favourite Super Mario Bros. heroes. These are used a handful of times throughout the game, when battling the enemy’s own papercraft constructions in a Sumo-like battle of brute force. These diversions never outstay their welcome and ensure that the general pace is never too slow or dull.

Paper Jam is not a game for those expecting a massively long JRPG, which is absolutely fine, because the pacing is spot on for the 25+ hours or so you’ll need to reach the end. The dialogue is what we’ve come to expect from Nintendo’s Treehouse localisation team, funny and full of personality, adding colour to the already colourful Mushroom Kingdom. There’s cameos from all manner of Mario mainstays, and it’s always a blast to see the paper characters interact with their fuller-figured versions (especially the squabbling villains).

Before starting Paper Jam, part of me wondered if AlphaDream’s Mario & Luigi formula was beginning to get stale. This game is in no way a revolution of what’s come before, but that doesn’t matter one bit – the mechanics are still as solid as they always were, the humour still makes my face ache from smiling, and not once did it ever outstay its welcome. Xenoblade Chronicles X might be Nintendo’s big RPG for 2015, but this excellent addition to the 3DS library shouldn’t be forgotten about either.

Not massively different to previous Mario & Luigi games.
Hardcore RPG fans might find this a little too simple.
Amiibo functionality is too cumbersome.

This game is in no way a revolution of what’s come before, but that doesn’t matter one bit - the mechanics are still as solid as they always were, the humour still makes my face ache from smiling, and not once did it ever outstay its welcome.