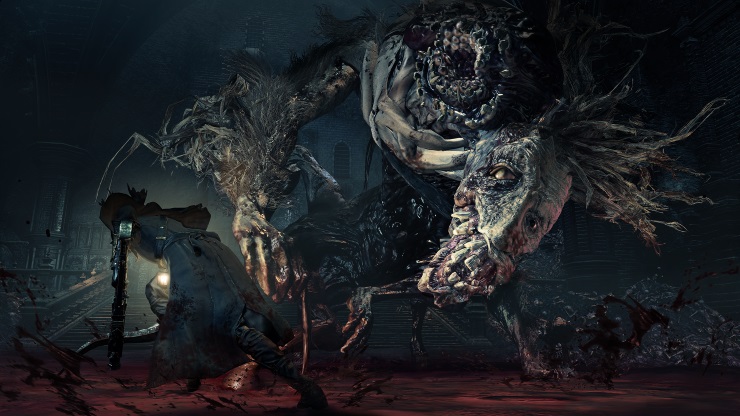 Considering myself not the worst Bloodborne player on Earth, I figured The Old Hunters would be a cakewalk since I didn’t exactly struggle with the majority of the main game’s bosses. However, after ending up in the Hunter’s Nightmare and spending more than fifteen hours alone trying to defeat the first boss, I’ve come to realise that FROM Software consists of cruel bastards – and I love them for it.

Call me a sadist, but the hours I spent attempting to murder Ludwig the Accursed were some of the most intense and ultimately rewarding periods of gaming I’ve had all year. When Bloodborne came out earlier this year, I bought it on a whim, having only touched upon the Souls series last-gen. Before long, it had become one of my favourites games of all time. The Old Hunters only confirms to me even more that Bloodborne is an utter diamond, through and through.

Significnatly more difficult than the majority of the main game, this new content will have you quiting in rage, even vowing that you’ll never play again. But it only takes an hour or so before your fingers start twitching and you want to get back into The Hunt. Bosses such as Ludwig the Accursed and Orphan of Kos are more overwhelming than any other bosses in the entire Souls franchise, whereas others in the DLC are difficult but manageable. But all the enemies leave you with little room to breathe, and pack an incredible punch, with many being able to half your health in one hit. Their design is flawless as it is horrifying, as expected from the team who crafted nightmarish beasts such as Amygdala, and Mergo’s Wet Nurse. Introduced here is a variety of new weapons: the Boom Hammer, Kos Parasite, and Holy Moonlight Sword; to name a few. While they are fascinatingly unique and can aid in certain situations, it can be difficult to forfeit your maxed out weapon from the base game to hunt with a weapon which is considerably weaker. This fact isn’t helped by the general difficulty of DLC: I would rather kill an enemy by bashing them three times using a +10 Tonitrus than spend five minutes chipping away at their health using a +4 Whirligig Saw. While a decent addition which satisfy that urge for new arsenal, they are perhaps best saved for future playthroughs of the game where Twin Bloodstone Shards and Blood Stone Chunks are more plentiful, allowing you to fortify them to greater strengths.

The new areas are coated with atmosphere, and couple together well with the general feel of the main game. Research Hall (in particular) is one of the most interesting additions, a maze of stairways inhabited by insane creatures with bulbous fleshy sacs for heads. Each new area feels fresh but still maintains the flow of the game, not feeling too out of place or random. They have all been designed beautifully, boasting spectacular visuals which help to add to the immersion of the nightmare. There are five new areas in total, each one populated with secrets and items galore. Co-operative play is something which is greatly emphasised in The Old Hunters, a feature which I feel wasn’t exactly required in the main game. Throughout the DLC, however, I hardly had my Beckoning and Small Resonant Bells out of my hands, as there’s almost a pressure to co-op with either friends or other hunters from around the world in order to defeat bosses (I’m sure Ludwig is almost impossible to defeat alone). This pressure is excellent however, creating a truer sense of companionship when victory is achieved, and allowing for solo players to spice up their play style slightly. As they say, a problem shared is a problem halved. If you’re not an online gamer then never fear, NPC Hunters from the League can also be summoned to help you out in a pinch.

Despite it being so difficult that it makes brain surgery look like primary school mathematics, The Old Hunters is a spectacular addition to the Bloodborne universe. Perhaps the difficulty is what makes it so addicting: no matter how many times I had my arse kicked, I still ended up coming back for more and it made the taste of victory so much sweeter. However, I can understand that the immense difficulty of these new areas may leave a bitter taste in the mouths of some. The new areas and bosses are magnificently designed, truly adding to the gothic aesthetic of the nightmare and only make me wish that Bloodborne went on forever. In short, The Old Hunters is the decapitated head on top of a towering pile of corpses, the bloodied cherry on top – closing the book of Bloodborne with a stupendous bang.

Difficulty can be overwhelming at times.

The Old Hunters faithfully adds to the gothic adventure of Bloodborne, and reminds you how delightfully wicked that bunch at From Software really are.