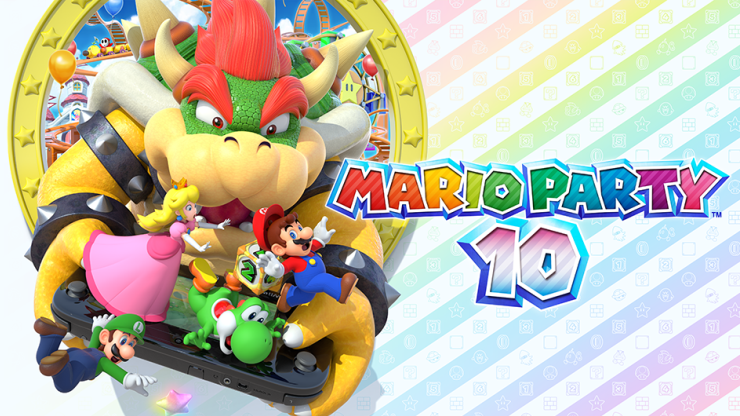 It’s fair to say that the strength of Nintendo’s first-party titles is all that is keeping the Wii U afloat, using their A-teams to pump out the Mario Karts, the Smash Brothers and the Zelda’s, eye-catching system sellers that they are. But in the background, working with less fanfare and much smaller budgets, you have the B-teams, quietly making titles like Mario Party 10 that you wouldn’t normally expect too much from. That’s unfair though, because in Mario Party 10, Nintendo has shown signs of innovation on par with many of its bigger brothers.

The Mario Party series has always been a collection of mini-games tied to a virtual board game. You roll a dice, move your character and perform whatever action is demanded by the space you land on. It’s simple, easy to grasp and great fun with friends. The variety of mini-games is fantastic, with a decent balance between luck and skill. You have Temple Run style races, hitting left and right to dodge obstacles; another has you running around collecting fruit, or trying to knock each other off a floating trampoline. Yes, some are more fun to play than others, but all are wonderfully presented, with the rules clearly explained and the chance to practice before each one. While most are free-for-alls, occasionally you’ll find a 2v2 or even a 3v1 mini-game. The former are self-explanatory, randomly-assigned team based tasks, while the latter are more interesting. One game sees three plays trying to hit the other in a duck shoot-style game, while another has them stuck on a platform trying to dodge skewers controlled by the lone player. Again, they are all fantastically inventive, and the amount of them means you won’t be playing the same handful over and over again.

The mini-games are wrapped in three game-modes. Mario Party is the standard classic, where you compete against three other players to collect the most stars by the end of the board. Winning them from board spaces or mini-games, you can lose them by landing on traps or Bowser spaces. The latter appear after each number on the dice has been rolled once, unlocking the cage Bowser is held in on the GamePad screen. These can cause you to lose stars, go back several spaces, or take stars from everybody and force you to fight for the collective pot. Fun and frantic, it rarely seems unfair, and until the final stretch there’s always a way to catch back up again, with bonuses given to the player in last place. The five boards available to play on in the mode are all distinct, with different things to deal with (Boo will haunt players on the Haunted Trail board, while Airship Central constantly changes its layout), although the mini-games stay the same.

The second mode is Bowser Party, which contains one of the best uses of the GamePad I have seen to date. Similar to Mario Party, four players are in a vehicle of some kind and roll a dice to progress, but they are pursued by a fifth player controlling Bowser on the Gamepad. Rather than stars, they must collect hearts on the board, which Bowser takes from them by beating them in mini-games. If they hit zero before the end, Bowser wins. It’s the mini-games that make this mode stand out though. All vs. Bowser, the player controlling the evil turtle views things on the GamePad. One mini-game has them tilting the GamePad to move balls of fire around an arena, attempting to hit the other players; another has them use the triggers to move pinball flippers. One even has you controlling it from Bowser’s viewpoint, the opposite to what is on television, as you attempt to hit the others with a hammer. The GamePad controls extend to the board as well: on one level players get to choose from six chests, some containing hearts, others heart-stealing fish, but the player controlling Bowser can see what’s in which, and can draw graffiti on the screen to try and trick the others. Stuff like that is exactly what the GamePad is for.

From one Wii U gimmick to another, the third mode is amiibo Party. Slightly different to the others, this mode has you play on a square board, going round and round for ten turns buying stars with coins instead of just collecting them. Which board you’ll play on depends on the amiibo you’re using, with each having slightly different surroundings. One neat thing is that you can swap board sections around, so you can have a part-Bowser, part-Mario board if you wish, providing you have another amiibo to hand or collect the respective token during gameplay. Mini-games in this section are the same as found elsewhere, including the Bowser ones if someone is using a Bowser amiibo. Four of you can play with just one amiibo, choosing from a character select screen, but rather than the nicely-animated characters of the other modes, here they are deliberately made to look like cardboard cutouts, punishment perhaps for not having bought four amiibos. The entire mode doesn’t have the slickness of Mario or Bowser Party truth be told; where they look taken straight from a 3D Mario title, the amiibo boards look a little plain, floating on nothing. There are other problems, too. Other than playing as Bowser in Bowser mode, you need to have a Wiimote to play, even in the amiibo mode. It makes sense, as the inclusion of motion control means there are a great variety of mini-games, but digging them out of a dusty cupboard when I had the GamePad and a Pro controller ready to go was annoying, and in amiibo mode juggling the Gamepad, Wiimote and amiibo is a downright pain.

At its core, Mario Party 10 is just another Mario Party game, but it is also the best one. Smash Brothers and Mario Kart are superior “gamers’ games”, but for partying with friends or family members who only play casually, you can’t get much better than this.