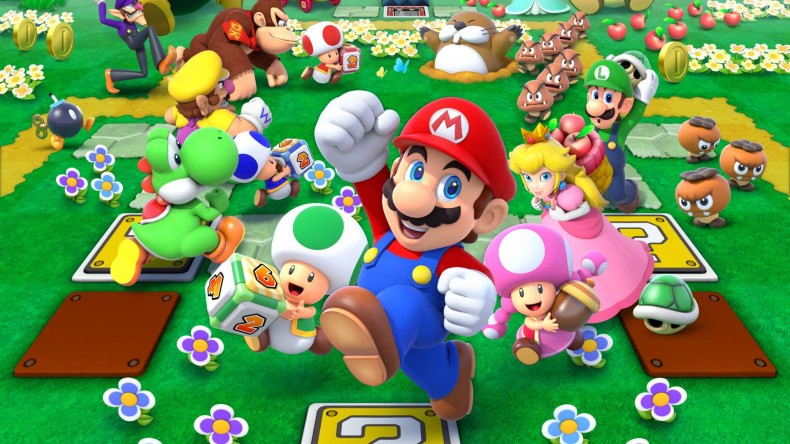 The Mushroom Kingdom is, quite frankly, a bizarre place. Always beset with the political machinations of Bowser they never seem to fail to find the time to Go Kart, have a fighting tournament (with friends) or get everyone round for a party with a board game, friend and foe alike in competition to collect things in an attempt to come out on top. This time around Peach’s loyal helper Toad takes centre stage in a different flavour of fun where it’s always your turn.

Star Rush’s main mode is Toad Scramble, which has you running around collecting coins, playing minigames, gaining allies and fighting bosses across large scale maps. Here, the “Rush” in Star Rush comes into play as all players roll and move at the same time, making it a race to see who can get to elements of the board first, be it a power-up, an ally (Mario, Peach et al) or a boss. You’re free to make your own way about the board instead of going for the objective, but if someone gets to the boss square well before anyone else then there’s a mad rush where you have to hammer the ‘A’ button to dash to the pipe so you don’t lose ground in the fight. This at least gives lagging players a chance to catch up, but against people who know what they’re doing you’ll pretty much find yourself boned. Despite all these elements you need to “rush” for, the pace of the game is still rather sedate regardless of all the pieces on the board moving at the same time. You’ve got to decide if you want to select a different ally to use, whether or not to use a power up, and despite the fact you can’t use different dice you need to select that as well. For each decision you make there’s a pause while the game makes whatever calculations it needs to and this slows everything down to a mind-numbing crawl.

The game maps themselves are nice and big, with distinctive themes and environmental elements exclusive to them, but the random placement for boss encounters can leave a lot of the board unexplored. The rewards for successfully downing a boss are greater than what you can accumulate from moving around the board, and it’s possible for them all to spawn on the same side of the map; what this results in are places littered with environmental hazards and collectables, but little incentive to actually go and explore them.

The Mario Party titles are always about the minigames, but in Star Rush they are too few in number and they’ve never really been a great leveller. Anyone who plays videogames is going to have a significant advantage over someone who doesn’t, at least for many of them. There’s a few where the outcome is down to chance or just good observational skills, but factor in the boss fight element and non-gamers will always find themselves at a disadvantage.

Not everything is open from the start; the minigames are filled out as you play them through the main party modes, and more game-types become available as your “Party level” goes up. You increase this by playing the modes that are currently available to you. Like XP, you get more depending on the performance put in.

There’s Coinathlon that has you playing minigames for coins to complete laps of a race; Balloon Bash, where you collect coins to trade for stars; Rhythm Recital, a rhythm action game with classic Mario tunes (but which never feels like you’re actually playing them); the rather unfair Mario Shuffle, a straight line race to the opponent’s end of the board; Boo’s Block party, a match 3 number puzzler; and a rather entertaining Minesweeper clone called Challenge Tower (which as much as I enjoyed it, I won’t ever go back to). The thing is, none of these are as good as Toad Scramble, and the effort required to unlock them isn’t really worth it.

What good does come out of this however is that everyone can play the game to an extent, non-owners can either play via download play granting access to a limited suite in multiplayer, or you can download the free “Party Guest” software which acts as a demo of sorts, but allows full game access when in a lobby formed by someone with the full software. It confuses things slightly, by creating a three tier system for play, but it’s pretty generous for anyone who doesn’t own the game.

On your own there’s extremely little incentive to play Star Rush for any considerable period of time. In a group there’s much more enjoyment to be had – and the download play/Party Guest system helps this along considerably – but that initial impetus fades well before the time required to unlock the extra modes, and the social aspect of a party loses something when everyone is staring at a separate screen rather than all focusing on one point. It is fun, but that fun is in short supply.

If a group of buddies all chip in Star Rush can be a cheap night or two of fun, but it’s not much more than that.