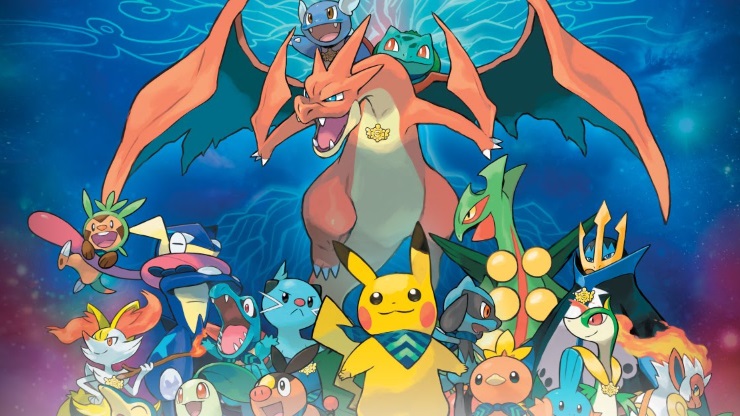 For the whole of my game-playing existence, Pokémon has always followed the same formula: pick a gender, write your name, then choose a starter Pokémon before embarking on an adventure to conquer the Pokémon League. From the original Blue to my most recent outing, Alpha Sapphire, this is how I have known the series to work.

But Super Mystery Dungeon… well, it’s an anomaly in my Pokémon career. Internationally it’s the seventh release in the Mystery Dungeon series, and the tenth title in Japan. I don’t know whether I should be ashamed of having never paid any attention to the series prior to now, with this one being the first in the series to really make it onto my radar and offer up a totally new system to master. The story is about as simple as it gets: you are a human trapped within a Pokémon’s body, who just so happens to find themselves in a world inhabited by other Pokémon. After taking a ‘personality test’ to help match you with your ideal Poké-alter ego (one of the 20 starter Pokémon), you choose a partner and embark on a mission to help as many Pokémon as possible throughout the world.

Upon awakening in the middle of a forest as your Pokémon of choice, you’re attacked by a swarm of Beheeyem and chased through the woods. You bump into Nuzleaf, who becomes you’re sort-of guardian, who takes you back to his home in Serene Village. From here, you meet your partner for the first time and the game’s plot seems to unfurl in broken segments. Short cutscenes show events happening in other parts of the world, where the titular cute creatures are being mysteriously turned to stone.

From the outset it seems aimed at newcomers. It never throws to much at you at once, with tutorials continuing all the way up to the six hour mark. During this training period, your activities are strictly regimented: you attend school every day with others, and learn something new just about every day ranging from dungeon combat techniques to exploration tips. While it is helpful to become acquainted with some unfamiliar systems, the sheer amount of tutorials can feel smothering at times and gives the game a slow start, but your mileage may vary. The core gameplay inovolves exploring the various randomly generated dungeons found within the world. These have grid-movement and enemy Pokémon wander around the various passages, moving when the player moves. Items are placed at random across the floor, along with trap tiles which can inflict a variety of status effects upon the player. The objective is to find the stairs on each floor until they reach the end, where (usually) a mini-boss battle takes place. It can depend on the premise of entering the dungeon, though, as later in the game you can enter dungeons to help other Pokémon find lost items or fight difficult enemies.

Item management is a huge part of the logic behind the game, and I regularly found myself struggling to decide which items I really need and which I could toss into my Deposit Box. In the early game, the backpack space is severely limited but expands (thankfully) as the plot goes on. Some items are totally essential, such as oran berries, and elixirs for when PP runs out, whereas others are as useless as the ‘g’ in lasagne and can be discarded as soon as you pick them up.

Combat is very different from your regular Pokémon title, with players having to press the left bumper to open their move-list and attack. The gridded movement system changes things completely though, as the positioning can play a huge part in winning. It can sometimes be logical to miss a turn to let an enemy get closer, as moving towards them will trigger an attack against you. Type weaknesses are still present so it’s good to fill your team with varying types of Pokémon to give you the best chance at success, but this isn’t always possible thanks to the obnoxious restrictions on switching your initial player character during story missions, resulting in a massacre of sorts when you enter dungeons filled with effective Pokémon.

Walking around a dungeon will restore health, but this is a totally unreliable way of healing as by the time you’re getting over half health, you’re more than likely to encounter an enemy. A strange mechanic which seems to have little bearing on your success within a dungeon is your hunger. Your belly will slowly deplete in fullness as you wander around, and once it hits zero, you’ll begin to lose health. That said, apples are the main way of replenishing your hunger, and are plentiful in dungeons, so it seems pointless at best. Eventually you’ll be able to use an ‘Alliance’ power which combines the moves of three Pokémon into one damaging blow. This depletes you hunger slightly, but is well worth using on tougher enemies who need an extra seeing to. You can also use bracelets (known as looplets) studded with gems found within dungeons to tweak their various stats to help balance the odds.

The dungeon-crawling is enjoyable, but repetitive at times. I found myself only able to truly enjoy it in short bursts, as longer periods left me feeling unfulfilled and bored. Some of the story missions in dungeons can feel a bit aimless, and in many of them I felt under-leveled and under-prepared due to having no foresight about the perils I’d be facing. After about 25 hours, you can enter free-play and really do as you please: all 720 Pokémon are present and able to join your team, with each having a mission for you to carry out. If you desire to complete all the requests, you’re looking at a 65+ hour game time: it is utterly brimming with content.

It’s hard to shake the feeling that Super Mystery Dungeon is an attempt to appeal to younger players with its cutesy dialogue and valuable life lessons about friendship and teamwork which seem to appear every ten minutes or less. That said, it has some insane difficulty spikes, and some bosses feel like they can only be won with divine intervention. Because of this, the whole game feels a bit unbalanced and can’t really settle on a suitable difficulty curve.

Set in a wonderfully colourful and lively world, Pokémon Super Mystery Dungeon is a pleasant entry that can provide hours of entertainment. It can feel like a game of two halves: on one hand, it’s a light-hearted and charming adventure seen through the eyes of Pokémon, but on the other, it’s a challenging and occasionally infuriating rogue-like that can wear out its own formula. The dungeon-crawling is fun, but is too repetitive for players to make a considerable amount of progress in one sitting. With a sluggish start to the story, I fear many players will have given up with it before it really ramps up, which is a shame. A good game, but certainly not one that’s for everyone.

Unfair-feeling difficulty spikes.
Too repetitive.
Slow to get going.

A pleasant little entry that can provide hours of entertainment, but is weighed down by it’s unfair difficulty spikes and tedious formula of dungeon-crawling.