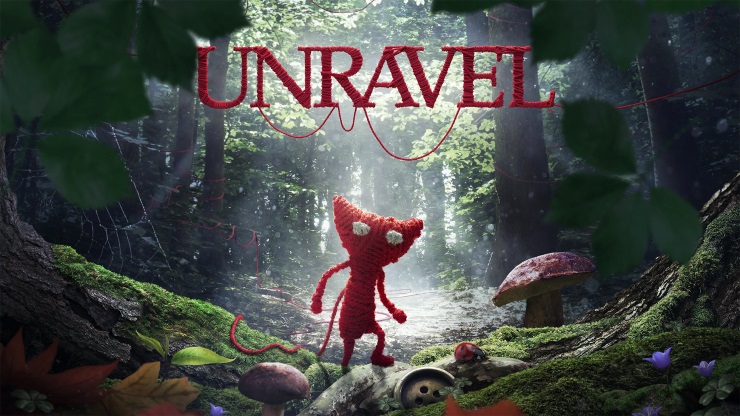 As a creative, you need to give off an air of confidence in your work. If you believe in the results of your blood, sweat, and tears, others are more likely to, as well. The words, “make of it what you will,” appear at the beginning of Unravel, as part of a message welcoming you into the universe. An interesting phrase to use instead of something like, “hope you enjoy it”. Maybe it’s a throwaway comment that some will probably put down to modesty, and that could be the case, but I read that in hindsight and see a developer that is aware of their game’s glaring issues.

Yarny (the face of Unravel) is made entirely of wool and is one of the most adorable looking things you’ll have seen in this medium. Similarly to Toy Story’s characters, you effectively come alive when no one’s looking and explore the memories of the elderly lady that cross stitched you to life. You do so by jumping into photographs that capture a split-second of her time with loved ones via these photographs which are scattered across various mantle pieces, shelves, and cabinets. Once you complete each 2D puzzle-platforming level, you receive a memento that is then placed on the photo album, while a number of real-life pictures can be perused once opened. It’s a personal story, so much so that it never feels like we’re invited in to understand these events fully. It’s obscure to the point that it didn’t take too long for the narrative to feel completely secondary because of this, which is a real shame. Thankfully, Yarny does convey more joy, sadness, anger, fear, and disgust in his own animations than some video game characters do with countless words of dialogue. The woolly wonder shakes like a dog when on dry land after a soaking at the beach; he will stand by a puzzle scratching his head, just like you’re doing while holding the controller; and he’ll try his damnedest to battle harsh weather conditions, using his over-sized head as somewhat of a battering ram against blustery winds. Yarny wears his heart on his sleeve. He’s a friendly, gentle creature, that will do everything in his power to reach the end of each vision.

But looks can be deceiving and sometimes a woolly little cutie can be a cog in a merciless machine. I was initially drawn in by the intoxicating aura of sickly sweetness; I caught myself “awwing” about six times in the first ten minutes. As time passed, I found myself swearing in technicolor and stretching the limits of my controller’s durability. When looking at Unravel’s knitted-star, you’ll see an avatar of innocence and fun – and I do agree with you, mostly, but there are instances where I also see the Prince of Darkness. Those pointy little ears have the ability to transform into devil horns very quickly.

Over Unravel’s run-time (six hours, depending on how hard you find it) you are required to leap, swing, and climb over all manner of obstacles in your path. From the off, you’re taught the basics: hold the right trigger to throw out your lasso and grip onto glowing, red knots in trees/beams/levers and swing from them, hold the left trigger and you can rappel down the side of large rocks (or pull your yarn in, if it’s baggy), press square and you’re able to tie knots in certain areas to create a trampoline on which you can propel yourself into the air, and specific objects can be pulled and dragged around the environment for you to use in your quest to reach higher platforms. It’s not complicated, but the often poorly designed puzzles have you questioning if you’ve missed something. A great puzzle will give you all the tools to solve what appears to be a brain busting evolution of an earlier iteration, not hammer you over the head with the solution mallet, and make you feel clever once you’ve completed it. A bad puzzle will give you all the tools to solve something that’s far from a mind-bender, provide zero context due to a lack of a previous example, and make you feel stupid once you’ve happened on the solution by chance twenty minutes later. There are countless times where Unravel just feels unfair, relying far too often on trial and error. One particular puzzle had me scratching my head for close to an hour. Said puzzle had me tying knots every which way on a tilting platform, then climbing up toward a higher platform and wrapping some wool around a protruding nail, attempting to dislodge a few logs from under an oven, tying knots in the aforementioned cooker’s door, pulling on that…effectively, I was overthinking the whole situation because all I had to do was go back a few steps and swing across a large gap that looked larger than what I’d jumped previous to that point. Sometimes Yarny makes those jumps, sometimes he doesn’t. These inconsistencies are a common problem, and that’s only one example from a list of many where the solution isn’t clear. I’m not looking for anyone to hold my hand, but to expect me to know what to do without setting any precedent is a bit much.

What also doesn’t help is the manner in which the foreground and background meld into one another. While there are stunning moments of beauty in here, if my aim is to avoid a seemingly inevitable watery grave, I’d appreciate it if a free-standing stick that is key to avoiding death stood out, rather than looking like something a far away bird can perch itself on. This 2.5D look is pretty, but impractical, because of our hero’s inability to access the backdrop that looks far too similar to where the action is taking place.

Wrestling with your trailing string can also annoy, but it’s mostly a clever mechanic that explains Yarny being made of what he’s made of. From the beginning of each level, right up until the very end, your body will begin to unwind and its your job to keep this little fella wrapped up. There are a number of balls of wool scattered across the stages and placed in areas that often make sense. You’ll find yourself questioning how on Earth you’re going to reach them, but they are obtainable. If you miss the first ball of wool in the memory, you won’t be able to get to the second one, basically.

Stop leaping around the environment for a second, though, and you’ll see a moment in time that could proudly hang in any gallery. There’s a puzzle in the early game where you must manipulate a see-saw in order to progress, but I was more taken by the hedgehog in the background waddling across the garden. Some of the darker moments are even more long-lasting, like Yarny being blinded by the headlights of a car and almost getting run over. The dichotomy of the black of night and piercing beams of the vehicle is one example of Coldwood’s exceptional use of lighting. Sunlight creeping through trees in a forest and hitting the surface of a stream is as wonderful as it sounds, and a twirling, flashing red light in a more industrial area, instantly fills your body with dread.

Delve past the picturesque views and thoughtful soundtrack and you’ll find a puzzle game that doesn’t explain itself enough and is plagued by inconsistencies. There are brief moments where things start to come together, and there are some superb moments that are drowned out by frustration. I could fawn over the characterisation of a ball of wool all day long, but I probably wouldn’t have time because I’d be too busy trying to figure out one of the many rage-inducing conundrums.

Unravel can deliver some picturesque desktop wallpaper, but when in motion, this 2D platformer becomes a frustrating puzzler that expects you to know more than you've been taught.