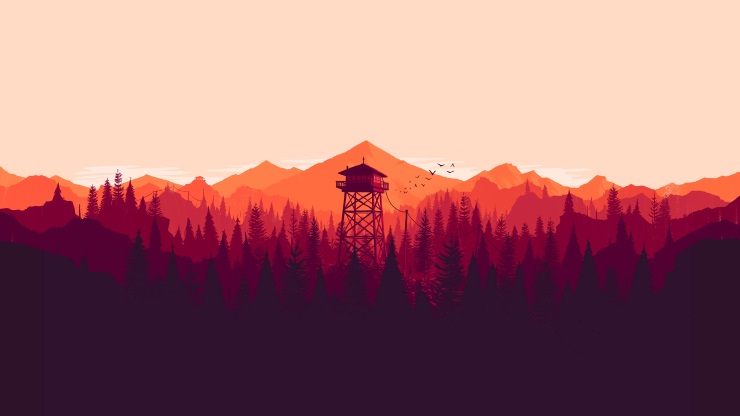 If there’s one thing that Firewatch does exceptionally well above everything else, it’s play with your perception and expectation of what it is. From the surprising introduction to the finale, you’ll never quite know what to expect and, brilliantly, none of the larger story beats are ones that’ll you see coming. Better still, it constantly makes you think, and that’s in large part thanks to the marriage of what you see and hear, combined with some of the most natural sounding dialogue I’ve ever heard.

Ultimately, it’s about two people conversing via radio: Henry (you) and Delilah are the characters you’ll spend around three and a half hours listening to, but crucially, the entire dialogue system is interactive, and superbly coded, meaning the conversation flows throughout, even allowing for you to queue up the next part. It’s clever, and it peppers the atmosphere of the beautiful Wyoming wilderness in a way that will be copied elsewhere in the future.

How you’ve ended up in the forest is something that’s quickly explained, but not something I’ll ruin here. All I’ll say is that Delilah is your boss, and you’re a Firewatch lookout. It’s your job to observe the forest through the summer, hopefully preventing any fires and other shenanigans that may happen. While it’s not that long, plenty does happen: keeping it vague, my mind ran a mile a minute at one stage as I thought I’d worked out what was going to happen, only to realise I was wrong. One minute you think it’s this type of game, then you think it’s another. What it is, though, is captivating. Much has been made of the visual design, and the concept art by Olly Moss has been rendering exquisitely here. Stylised, colourful, but also with enough real-world influence that it feels familiar yet exciting. Sun bursts between the trees, and later will start to set in a manner that begs to be captured with the in-game camera, or even snapped for a PC wallpaper. Sense of scale is well-measured, and the temptation to force excessive wildlife into the area you explore is resisted, making it feel all the more special when you do encounter it. I will say, though, that I have a slight problem with Henry’s character model. As you rappel down a rock face, he seems a little stumpy in the leg department. While it’s clear the art style is all about chunky characters, he feels a little stunted. It’s a minor blemish, along with a few very occasional texture pop-in moments (on Ultra settings), that I really only mention for balance. Performance is actually much worse on PS4, which suffers from frame-rate problems. As you’d expect, PC is way to go for this one if you can. Don’t get me wrong, it’s entirely playable on PS4, but it’s also pretty noticeable.

But what you see is only matched by what you hear. The aforementioned dialogue is performed exceptionally well. For a change, it’s like listening to two real human beings. What starts as a chat between two strangers who’ve never physically met, will eventually become a more relaxed, friendly relationship. When you’re stuck in the woods with only a radio for company, you’ll get to know the person on the other end of it, and that’s recreated here so well. Jokes that are created through chat will crop up later, and without hitting you over the head with it, Firewatch remembers what has happened before. It all feels important, while somehow feeling throwaway, just like a conversation with a real person should. Ask yourself: do you talk to people constantly thinking “Oh, I’d better remember this”? Of course you don’t, and that’s why Campo Santo’s conversation system stands so tall, here.

And I get that you’re probably thinking I’m skirting around telling you what this game is. It’s a first person, exploration based game. I don’t want to tell you if there’s combat, or peril, or an antagonist, because I feel like Firewatch is more than that. It’s a story, it’s well told. It has a beginning, and ending – it feels real, no, the characters feel real. There’s no lull, it’s exciting at times, reflective at others. It has some moments where you’re just walking, and others where you’re doing quite “gamey” things.

But more than anything, it’s another example that games can just be more. We’re rapidly approaching a place where stilted, fake-sounding dialogue isn’t acceptable. People want to explore something fantastic but tethered to reality. We, as players, want to feel connected to our games. We want them to make us cry or to make us think; to make us feel. Firewatch does all of this, and leaves you reflecting on it afterwards. Towards the end there’s a moment that made me laugh out loud. It wasn’t a joke, nor a piece of dialogue. No, it was an object in a place that tied everything I’d learned about Henry and Delilah’s personalities together. Despite the relatively short run-time, the characters felt like old friends, and that’s not something many can achieve. As such, if you care at all about storytelling in games, Firewatch sets a new high bar.

Some hitching on console.
A few backtracking moments.

A gorgeous, spellbinding game that plays with your thoughts and delivers a narrative throughline that you never see coming. An absolute must for fans of storytelling in games.