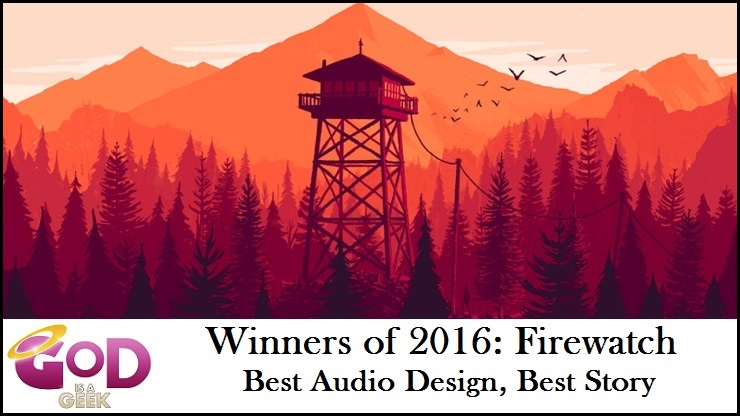 This article contains spoilers for Firewatch

It’s easy to finish Firewatch and be left wondering what all the fuss is about. I remember thinking, “that it?” when the credits began to roll at the end of Campo Santo’s debut game. Sure, I’d enjoyed Firewatch well enough. Walking through the sun-soaked Wyoming countryside is easily one of the most tranquil experiences in video games to date, and conversations with the sweet and troubled Delilah sure made the summer job as a fire watcher worth all the while, but upon the game’s end things initially felt a little flat.

Throughout the wander game (better phrase than walking simulator) a creepy mystery begin to unfold as if you’re turning the page of a thrilling novel: two teenage girls go missing, with their tent ripped to shreds, a large area of the park is spookily fenced off as if it’s an alien hotspot and, to make it all worse, there seems to be a weirdo out there listening to your radio conversations and stalking you. Tantalising and terrifying. All these mysteries are set up beautifully in Firewatch, they are all delicately poised and intricately connected, and they’re all genuinely intriguing. Just like Henry, you’ve probably had enough of all the bullshit and want to get to the bottom of just what the hell is going on. But then, slowly you begin to realise that there isn’t really any grand mystery at all, there isn’t a shadowy government conspiracy, there isn’t a monster prowling in the woods. The missing girls turn up miles away and are alive, the strange research camp is burned to ashes, and the boogeyman under the bed just turned out to be another broken human.

All these subversions and the seeming lack of fulfillment on these threads can leave a sour taste in the mouth for a time, because it takes time, time reflecting, digesting, interpreting and deeply thinking about Firewatch for its beauty, not just on a surface level, to be fully realised. Firewatch is restrained and mature, it didn’t indulge on corny and cheesy horror stories, there wasn’t any big twist at the end because it’s story wasn’t about that, it was about humans and the motions we all go through.

Delilah, the twinkle on a distant peak and the only person in which Henry interacts with during his stay in Two Forks Tower, is so likeable because she is layered and flawed, which makes her authentic. She isn’t just a two dimensional sprite, a one note character designed to aid the protagonist. She’s real, and her flaws make her so. She spends every summer out in the wilderness as she wants to be alone in reality as she feels on the inside, she’s an alcoholic, a compulsive liar, scared of commitment and she stole the bloody Pork Pond sign! But we don’t dislike her for these negative traits, because she’s just like anyone of us, and has ample positive traits that outweigh the flaws, and those make us like her. The same can be applied to Firewatch’s antagonist, Ned Goodwin. While he’s infinitely less likeable than Delilah, he’s still a complex character who’s suffered tremendous trauma and is just dealing with it in his own way. Campo Santo so easily could have made him a psychopathic serial killer who had the missing girls’ skins draped on the walls of his cozy bunker, but they were far more elegant than that. He fought in a war that damaged him, tragically lost his son and could just no longer face the real world. So while Delilah copes by drinking tequila and doing crosswords in her tower, Ned copes by secluding himself from civilisation.

The same level of complexity is also present with Henry. His wife is thousands of miles away and probably no longer remembers who he is, he’s at a crossroads and doesn’t know in which direction to go, so he got off the road completely and escaped for a summer. He’s a decent bloke, but the battle that is raging inside his head is clear: do I be faithful to the wife I love, or do I try it on with the owner of the lovely voice on the end of my radio? The tug-of-war is typified in the game’s climax when the player is given the only meaningful choice in the entire game: do you put on the wedding ring, or do you leave it to gather dust in that lonely tower? Your decision, while not having an impact on the game itself, does tell you just exactly who Henry is and either way is believable, which is a testament to the masterful writing in Firewatch.

Firewatch is a stunning looking game with drop dead gorgeous vistas and sun kissed valleys, but it’s true beauty comes from its characters.