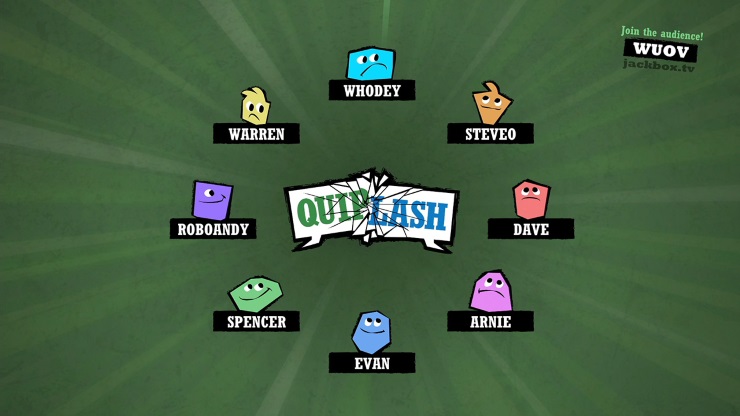 The Jackbox Party pack is the best party game I’ve ever played; a selection of excellent titles that anyone, regardless of their skill with traditional video games, could have a laugh with.

Quiplash is the devs’ follow up, essentially one of Jackbox’s minigames released on its own at a fraction of the price. The premise – as in all great party games – is simple. You and up to seven friends compete to come up with the best conclusion to a series of quips. Each is given to two players to complete, with the other players voting for their favourite – normally the funniest (read rudest) – with points split on a percentage basis. Because of the totally random nature of the quips you may enter, there’s technically limitless fun to be had, with no “right” answer to learn.

There are a few twists though. The final round, for example, which sees all players complete the same quip, before giving them three votes to dish out each. It causes some fantastic answers, and the nature of the game means as you get into it, you become more and more inventive, making it difficult to know who to vote for. The larger twist comes with the player count however. Like Jackbox, Quiplash is played using tablets, mobiles and laptops to input your answers, and because of this Quiplash lets you play with a staggering 9,999 other players. While only eight of you can enter quips, every other player who joins in can vote on the answers given, meaning once the quips are actually in it basically becomes the same game, with the entertainment derived from the ridiculous answers you and your friends cook up.

That 10,000 figure is unlikely ever to be utilised, but it fixes the one issue I had with Jackbox, in which only one game strayed beyond eight players. While it could accommodate 100 players, Lie Swatter was one of the weaker games in the collection, so it’s fantastic to see a game as good as Quiplash that can be played by a real party. Again, like Jackbox, the presentation is incredibly impressive. It’s slick and smooth, easy to pick up and play for anyone. Most importantly it recognises the key factor of a party game: pace. Give people downtime, especially when the wine is flowing, and they become distracted, basically killing the fun. The speed of Quiplash prevents this from happening, with players filling in their blanks simultaneously, followed by a short time limit for the actual voting. It keeps the game moving, keeping you more intensely involved, more giddy.

Quiplash really is bloody great then. Admittedly it lacks the variety of Jackbox, where if you grew bored of a certain game you could immediately switch to another, but it’s also half the price, and with the endless possibilities of the standard quips, along with DLC promised for the future, there’s plenty here to keep you playing for many a party.

So many players.
Truly an excellent party game.
Simple to pick up and play.

Not quite as good value as Jackbox Party Pack.

An almost endlessly replayable party game from the creators of the ultimate party pack.