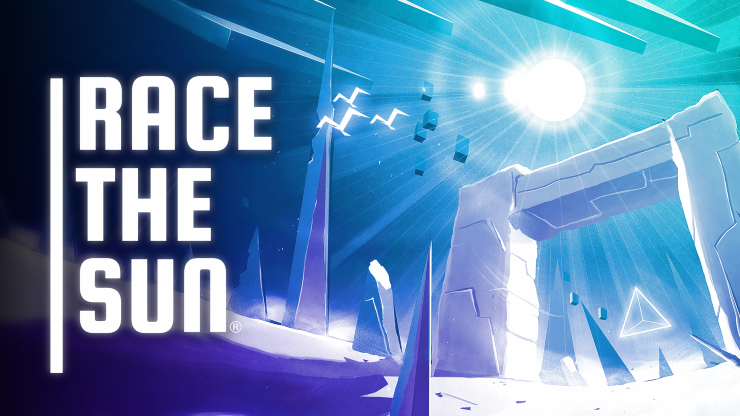 Race The Sun is very simple in concept. Your aim is to guide your ship across regions in a world collecting tris, to increase your score by avoiding obstacles. This sounds easier than it actually is, and Race The Sun is one of the nicest games you will play on PlayStation.

Race The Sun has a lot going on in an otherwise minimal looking experience. The core game is an endless runner set in a world full of obstacles that are geometric shapes, where you have to literally race the sun. The game ends when you either crash (this will happen very often), or lose battery thanks to being in the shade. The aircraft you fly looks great while moving, but is powered by the sun. So if you’re in the shade for too long, you lose power. As you clear regions, the game gets harder and the visuals go from great in sparsely populated regions to jaw-dropping in later regions. The game also runs with no frame drops or any visual issues at all on PS4. This is a superb port.

The world you play in changes every 24 hours, and I love how they have implemented a daily challenge system. The 24 hour pattern ensures everyone is playing the same world at the same time, and there are individual leaderboards for each world as well. Race The Sun’s gameplay is surprisingly calming. This is in part thanks to the absolutely lovely soundtrack. There are three objectives that are active at any given time, and completing objectives increases your level which in turn unlocks power-ups, multiplier bonuses, and enhancements for your ship. Race The Sun doesn’t explain when certain things will be unlocked (like the other two game modes), and you only get to know this stuff when you actually unlock it. As you get more power-ups and enhancements, your score and performance in the world becomes a lot better. Nothing is certain in Race The Sun, and that feels great. Some objectives seem absolutely impossible on one day, but the next day you’ll manage clearing that tricky objective with no problem.

“Race The Sun
nails what it
sets out to do”

Perfect controls are something most fast paced games absolutely need. Your ship controls wonderfully, everything is responsive and, barring when you actually crash, you feel like you’re in complete control. Power-ups range from basic tris that are blue coloured and increase your score, to a green coloured one that enables a single jump. The yellow coloured power-up slows down the sun and gives you a speed boost. As you play and level up, power-ups like a single crash protection become available, and you have portals appearing in the world that transport you to other worlds. You also unlock decals for the ship after a few levels.

Race The Sun’s soundtrack deserves a special mention. In a game that involves precision controls to avoid obstacles as you fly across regions really fast, Race The Sun sounds almost calming. My only real complaint about the audio in the game is the crash sound. It feels completely out of place with the rest of the audio design.

PlayStation platforms get an exclusive game mode called Labyrinthia that unlocks when you reach level 25. One would think exclusive content wouldn’t be hidden behind so many hours of gameplay, since the exclusive mode plays out differently. There is no sun in Labyrinthia, so you have to navigate your ship in a maze that has obstacles and paths moving at all times. The other game mode (Apocalypse) is present in the PC version as well, and it is much harder than the normal mode – I cannot stress this enough. The game won’t appeal to everyone, though, and the initial difficulty spike and level grinding may turn some people off.

Race The Sun absolutely nails what it sets out to do, and it’s a game you will play in short bursts every day. While the initial feel of the game might be a slight grind thanks to the bare-bones ship, your perspective will change a few hours into the game as you start unlocking more things and as your score starts making its way up on the leaderboards. This is a game you really should experience.

A great game that you'll fire up daily, now on your PlayStation.