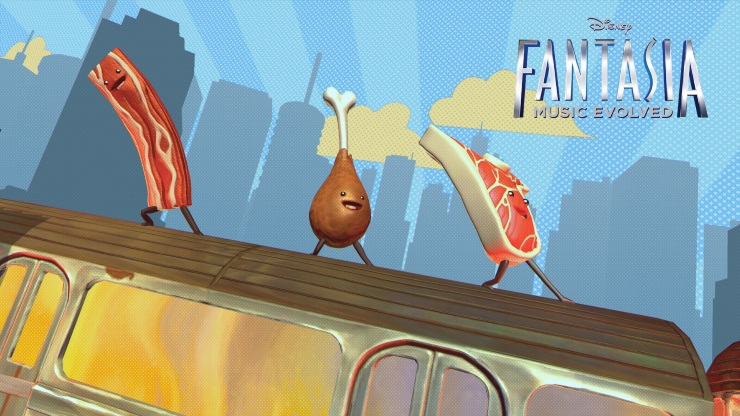 When Fantasia was first released to audiences in 1940, it was a revolutionary combination of classical music and cutting-edge animation. New animation techniques and cinema sound systems had to be implemented in order to deliver upon the idea of creating immersive animated stories which were inspired by, and seemingly reacted to the accompanying music. The film and its sequel still enthrall Disney fans and music lovers around the world almost seventy-five years since it first captured our imagination.

Harmonix have been at the cutting edge of music-based video games for years now, in terms of both gameplay innovation and hardware implementation, so it seems fitting that they should use their expertise in an attempt to bring the magic of Fantasia to consoles. Taking inspiration from the famous Sorcerer’s Apprentice sequence, where Mickey Mouse conducts inanimate objects, oceans and even the stars to his musical whims, they have crafted a motion-controlled experience that manages to feel like a natural extension of the music included in it.

Although it resembles orchestral conduction at first glance, you will soon realise that there is much more to the gameplay than simply keeping time – your movements seemingly accompany and enhance the music. Sadly there aren’t Disney cartoons accompanying the music, which feels a bit odd for a title based on Fantasia, but you soon see that Harmonix have approached the idea from a different angle. This is a new rhythm action experience, so you shouldn’t expect to master the ins and outs immediately. Much like they did with their other music games, they have created a control system which fits the game very well, but is also unlike anything else that you have played before. As musical tracks play, a series of different prompts will appear on-screen. Different icons represent actions such as arrows for swiping arm movements, and circles for punching ones, as well as actions that need to be held for long notes, and lines that must be slowly traced for more complicated sections. Thankfully, the Xbox One’s Kinect sensor is accurate in detecting your movements, whether you choose to throw yourself into the game with wild, exaggerated flailing of your limbs, or if you prefer to be more controlled with smaller movements. When a prompt is missed, this is almost always your fault rather than that of the hardware, which is refreshing considering the issues that have plagued Kinect during its lifetime.

It may take a while to get the hang of this new control system, but there is a lengthy tutorial within the story mode to help you learn the ropes. Unfortunately, the story mode is a little slow and heavy handed, resulting in the tutorial phase dragging on for too long before you even reach the meat of the campaign. As the new apprentice for Sorcerer Yen Sid, you take up the mantle which Mickey once held. The Noise (a disturbing force) has begun to corrupt worlds, so you must travel between them setting things straight, via the medium of musical performance.

Although the story is paper-thin and a bit laboured, you won’t forget how the different elements come together. These features (and new songs) are all locked behind progress walls, where you must go through the story (including songs that you may not want to play) in order to get to them. Songs only really start to come to life once the remix and composition features are introduced, so it’s a shame that you have to play for at least an hour before that time. But once you can use them, Fantasia becomes much more than a performance; now you feel like you really are shaping the music yourself. Firstly, remixes act like multipliers. At intervals throughout the music, you can choose to switch out particular instruments in the original performance for others from remixes. Of the thirty-three tracks in Fantasia, each has two additional new mixes. For instance, Blue Monday by New Order can be played in its original form, but halfway through you may choose to switch out the guitar from the track with violins from an orchestral mix, or you may sample the bit-tune mix and make the song even more electronic than it already was. These can be switched in and out as you please, assuming you reach set score targets.

Composition segments occur from time to time in songs, whereby you can conduct a certain instrument for five to ten seconds, which is then recorded and sampled into your current performance. You might wave you arms to construct a new drum beat to play in the background, or grab and manipulate a section of track to distort the lyrics. These are only minor changes that won’t dramatically alter each song, but more musically-inclined players can find subtle ways to personalise the tracks. Considering that the story mode requires the replaying of tracks, it is a good thing that these features make each play through more unique.

Aside from the story mode there is only the song library, but this locked away to begin with. Thankfully there is an option in settings called Party Mode, where achievements and stat tracking is disabled, but all songs and mixes are made playable. This is absolutely necessary for multiplayer, as no-one wants to have to unlock songs in order to have a two-player game. Multiplayer works much the same as the solo mode, although each player has colour coded icons to hit. The highest-scoring player in each section will win the chance to remix the song however they wish, so it can become a tug of war between musical styles. It can be confusing at first, with two different sets of icons on-screen, but once you both get into the groove it’s a lot of fun crafting new tunes in tandem. Disney Fantasia: Music Evolved may not have been the marriage of music and cartoons that I hoped it would be, but it certainly is a completely new and exciting form of rhythm-action game. It isn’t one that relates directly to a known skill, such as guitar playing, drumming, or mixing turntables, but it soon becomes second nature. When you finally begin to feel the beat and bob along to the instruments as you play, that is when you begin to realise how well the gameplay connects with the music.

However, the package is a little light on content. Although there are three versions of each song to play with, there are only so many times you can play along to Lady Gaga, no matter what mix it is. More gameplay modes would have been appreciated to create a more rounded and long-lasting package, but Fantasia is a bold first attempt. Most impressively, perhaps, Harmonix have implemented Kinect with confidence and skill, so that it never feels like a chore or a gimmick, instead it is the perfect control method for conducting and crafting magical melodies.

A totally unique music title that will get even the most tone-deaf gamers enjoy composing and remixing tracks.