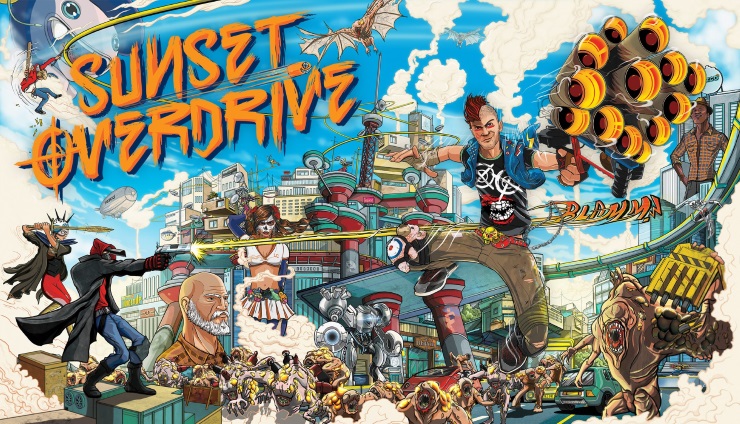 Let’s get one thing straight: if you didn’t like Ratchet & Clank, you’re probably not going to enjoy Sunset Overdrive. Insomniac have taken the irreverent characters and the daft humour from those games, mixed it with an open world that looks glorious and is a joy to traverse, mashed it up with some Jet Set Radio rail-grinding, and put it all together into a single third-person shooter that just begs to be played.

But the most important thing is that they’ve remembered that in a game like this, fun has to be front and centre. Completely self aware (to a fault, at times), this is the antithesis of the dull brown cover shooters that think they’re telling a tale for the ages. You see, while Sunset Overdrive does have a story, it’s generic and forgettable, but it never pretends to be otherwise.

Fizzco are the Coca Cola Company of Insomniac’s world, and they are launching their brand new energy drink, which just happens to have been rushed to market (thus, not tested) and has caused the residents of Sunset City to turn into a variety of hideous mutants, who seem to want to kill everyone and everything. It’s straight out of the Futurama Slurm episode, or even the DmC reboot. The star of Sunset Overdrive is you, the player – and not your “dudebro” avatar. There’s never a dull moment, because there’s always something happening. Whether it’s the upgrading of your guns, or a popup telling you that you’ve levelled up a certain passive skill, the screen is alive with colour and information, constant hooks that give a feedback loop rewarding you for whatever the hell it is you’re doing at any given moment.

And there’s a lot to be doing, too. Almost too many collectible types litter Sunset City, and they individually collate towards buying amps. These are passive abilities that can be applied to your weapons, but there are also overdrives to unlock as well. It’s a complicated system to explain, but in practice it’s fairly simple. As you grind, jump, bounce, wall run, shoot and kill, you will progressively increase a meter that works in stages. At stage one, a single “amp” will be active, all the way up to the fifth stage, whereby all of them are going at once. Variety is the spice of life, as they say, and just like the customisation of your avatar (you can even change sex mid-game), there’s a huge number of amps and overdrives to play with. One minute you’ll be flinging fire from your melee attack, the next your roll will be electrocuting foes.

There’s a fort defence mechanic hooked into the amp system, as well. Some amps can’t be purchased, and instead need to be “cooked” over time. This process causes the OD (the mutants) to attack in droves, and it’s a straight up horde mode. You can set traps that use electricity and then defend waves until a timer runs out; your amp is cooked, and the enemies wiped out. These “Night Defence” missions are interesting, and offer a challenge as you get further into the game. The astute among you will notice that what I’m actually describing there are perks, though. Never has a game been so needlessly complicated in explaining itself, but all is forgiven because the world is so much fun to just exist in There are two buttons needed to move about: X and A. Tapping the X button will attach you to any grindable rail (and Christ, everything is grindable in Sunset City) while A lets you jump, or bounce from certain objects (even trees let you bounce).

Once again, this is a simple idea infused with such life thanks to small additions. Hit X while grinding an electrical cable and you can use a hook to grind underneath it. This helps you avoid any obstacles, but if you quickly switch back to the top, you can hit jump and gain some serious air. Likewise, if you hit the jump button as you bounce, you’ll go higher. There’s even an air-dash move you can unlock after a few hours, to get you moving about like a professional.

In fact, it’s vital you click with the movement, because if you take to the ground and play as though it’s a traditional third-person shooter, you’ll die quickly. You can’t take a huge amount of damage, and it’s very clear Insomniac want you to be moving at all times. Often rails will be square, so you can (for that moment) allow your avatar to go on an auto-pilot journey while you concentrate on shooting. Eventually the battles will get too tough to even stay on a rail like that, and you’ll have to master moving around (a lot) and shooting. Thankfully there’s an incredibly generous aim assist, because otherwise the combat would be next to impossible. As it is, the variety of enemies makes for some satisfying combat. It may start almost appearing as a horde mode game, but very quickly the three very different factions of enemy (each faction has multiple variants that force you to change up your style) reveal themselves.

Like the Ratchet & Clank series, Sunset Overdrive goes for a zany approach when it comes to weapons, but doesn’t quite hit the highs you’d hope for. The opening gun is childishly brash, but the rest just don’t live up to their comedic hopes. A gun that shoots explosive teddy bears is useful, but not particularly full of character. At one point you even unlock a straight up AK47, which just seems the complete opposite of what we’re used to from Insomniac. There are others that are more amusing, but they don’t seem to actually be different enough in terms of what they do – instead it’s lasers, automatic weapons, explosives, or fire-based guns, resulting in a functional set of weapons, instead of a hilarious one.

It looks gorgeous, of course. While not (technically speaking) the best looking game you’ll ever see, stylistically it’s a treat. Bursts of colour come from every enemy, and onomatopoeic text will appear as certain enemies die, or things happen. The city is incredibly well designed, and the achievement that asks you to hit one hundred style moves feels like it’s there to remind you of how well it all works. Better yet, technically it performs without a hitch. Despite a ridiculous amount of enemies being thrown at you, the frame-rate never falters. The art design and technical performance are truly impressive, and that carries into the surprisingly good multiplayer mode. Rather than copy everyone else and throw in some form of competitive action, we’ve an eight-player co-op based affair here. Just like in the single player, a variety of mission types are on offer (from simple kill ’em all missions, to point collection grindathons) and can be voted for after each one ends. Culminating in a Night Defence that is affected by the level of difficulty of the prior missions, it stands up as a fantastically fun distraction, and even with the volume of enemies on-screen, it holds up well with the additional seven players.

“Sunset Overdrive
doesn’t feel like anything
else I’ve played in ages.”

Too many open world games run out of ideas when it comes to the story missions, but Sunset Overdrive has interesting and, most importantly, fun twists on its mechanics at every turn, making for a genuinely enjoyable campaign that’ll take about 9-10 hours (if you just do a smattering of side-quests) to beat. One boss fight (there are a decent amount, all enjoyable) had me shooting my enemy’s back before grinding on it for the final blow. Furthermore, somehow Insomniac even manage to put in an early task in that’s a twist on an escort mission that is actually fun. That said, often the distance between each story mission isn’t ideal (it’s clear the world and side-quest locations are designed to distract for more fun), and the weapon distribution feels a little stingy – unless you’re doing lots of missions aside from the campaign, you won’t have enough to buy every weapon from the store.

That particular boss battle does raise one important thing, however: the humour. There’s a heavy “dudebro” element at play here, and though not as unbearable as Delsin from inFamous: Second Son, the protagonist is a redeemable hero; a just-about-likeable dick. But then, the colourful list of characters is reminiscent of Dead Rising 3 at times, which you’ll either love or hate. There are numerous pop-culture references throughout (Game of Thrones, Breaking Bad, Reddit, Gamefaqs – check!), but overall I found the humour to hit more than miss, though when it does miss, it’s eye-rolling time. For example, a repeating “don’t forget, I can fast-travel” voiceover is okay the first time, but that joke only works once. By the time the credits rolled, the humour had slightly outstayed its welcome, and the audible laughter it had created previously was replaced with a simple smirk. But it has character. Deaths are almost rewarded with a respawn animation, and even choosing to fast travel is met with our hero drinking himself unconscious, before waking up at his destination. Like the City itself, Sunset Overdrive feels as if it was designed by people with personality, not by committee, and there’s something refreshing about a game that comes across that way.

When all is said and done, Sunset Overdrive doesn’t feel like anything else I’ve played in ages. It’s a real breath of fresh air to travel around an open world with such wild abandon, and the variety of enemies combines with the general movement to make fun the most important aspect of the whole package. It never feels a chore to play, and although the fourth-wall breaking and sense of humour won’t be to everyone’s tastes, this is a game that any Xbox One owner should give a go.

See footage from the first two hours here, and don’t forget to subscribe.

Humour won't be for everyone
Guns are slightly disappointing

A game that puts player fun ahead of everything else, and is bursting with colour and character.