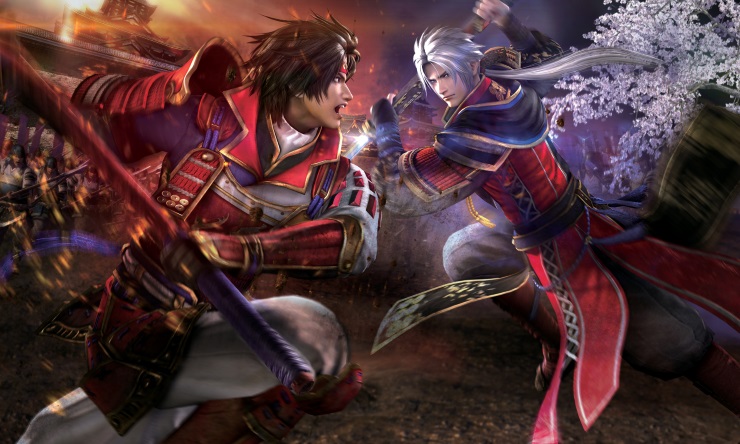 I have a friend, he’s not the most intelligent sort, bless him. But he brought to me a rather interesting word: “Booloo”. Basically, to go booloo is to launch yourself screaming and wind-milling into a fight. As Samurai Warriors 4 isn’t Dynasty Warriors you can’t pursue Lu Bu, but you can go booloo.

Now, I’m not an expert on the Warriors series of games. While I’ve liked what I’ve played previously, there’s always been just too much vying for my attention to fully immerse myself into the series. But Samurai Warriors 4 is worth a go, that’s for sure. Within minutes of loading it up you’re in battle, spinning like a whirling dervish mowing down all in your path, sending identikit bodies flying left, right, and centre. It’s chaotic and it’s quite something to behold. It happens fairly frequently too, as the gauges that need to be filled to perform your musou attacks and rage ability (and by extension a rage musou attack) fill up very quickly. It’s kind of like being in a shonen anime adaption, helped along by the Japanese voices and subtitles. There are three main modes when you want to start: story, chronicles, and free. In story mode you choose one of the four initially available clans and complete four missions based on their story. Doing so unlocks other clans for you to play as, to tell the stories from different angles and see how they all intertwine. Chronicles is a little different, through the dojo you can create a character, and although the creation tools aren’t the best around, you can get some okay results (I created a rather too smiley version of FFXIII’s Lightning). The most interesting part is that you can choose how your character stats level up as they gain experience. The story is pretty flimsy – you select a feudal lord to serve under and are sent out into the world to chronicle the stories of the best martial artists in the country. Defeating other characters has them join your band of fighters and unlocks them for use in free mode as well.

Free mode allows you to choose any unlocked character and play previously opened missions from the main game. The missions keep you busy with constantly shifting objectives as new enemy officers enter the fray. At one point I had three objectives on the go at once, and it can get a bit heavy trying to juggle them. Thankfully you take two characters into each mission with you and you can switch between them on the fly, you can also set them to roam the map at will, stay and defend a point, or just wait in a particular place – it’s fairly flexible; if nothing ground-breaking. It’s just a shame that these missions seem to be the same thing over and over, with practically no variation.

Looks wise, this is a cross-gen game in every sense. Character models are okay, textures are higher definition on PS4, making the armour and faces (of the male characters in particular) look quite nice. The levels themselves are all similar in layout, and while you won’t really notice when you’re in the middle of a fight, the pre-mission flybys show them to be really quite bland. Really though, seeing as this is on PS4, PS3 and Vita (and allows cross-saving to work between all three, but there’s no cross-buy, sorry folks), it’s an obvious concession to make. What is less forgiveable is the camera. It’s too low, and any shift you make using the right stick is automatically moved back once you do anything else. Not only that, but the camera is never moved by anyone but yourself, so, if you are fighting in one direction and need to turn around to start attacking an enemy you happened to bypass, then you’ll need to rotate the camera yourself. This gets rather frustrating the more it occurs, as it can cause you to lose your existing combo count, and with every button on the controller serving some sort of purpose there is nothing that allows you to click to re-centre it behind the player character.

Samurai Warriors 4 is likeable but not loveable. There’s an illusion of depth here, but overall this just makes it more frustrating when you realise it’s as deep as a puddle. If you’re a fan of the series you could add another point on, but for outsiders there isn’t enough here to convince them to try again.

While Warriors fans may find more of what they enjoy here, there just isn't enough meat on the bones to convince non-believers to part with their cash.