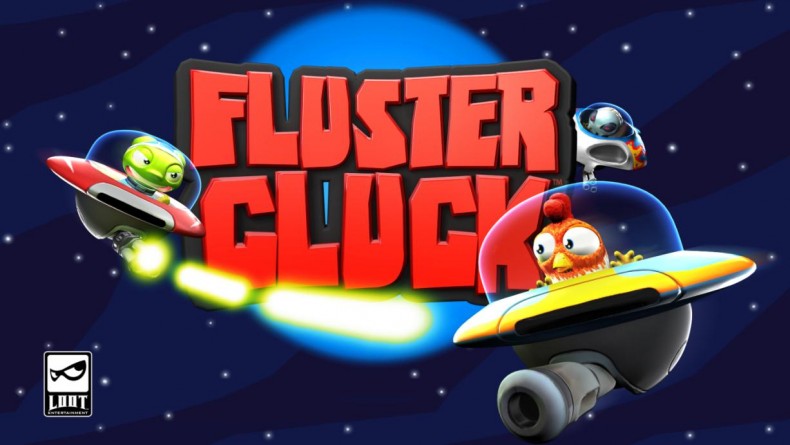 It’s easy to make some games sound interesting and off the wall on paper. Take Fluster Cluck from Loot Entertainment, for example. The premise is nuts in an almost endearing way, just as many games intentionally court their bonkers side to stand out. Unfortunately, unlike, say, a classic comedy game like Worms, Fluster Cluck just doesn’t do enough to hold your interest once you start

The basic concept revolves around a bunch of little green men intent on “chikkinizing” everything on Earth. This is accomplished by picking up whatever moves and dropping it into a Chikkinizer to turn it into, yep, a chicken. Why? Because chickens power their spaceships. Or something. It’s really just an excuse to be wacky and zany and other words Timmy Mallet used to love.

You can choose your alien and the colour of your ship, but it’s wholly cosmetic. You can adjust your weaponry from a few limited options, but there’s not much between them. Action takes the shape of a 3D shooter wherein you guide your little flying saucer around various environments collecting wildlife and shooting other aliens. There are one-use super weapons like a giant rocket, but they don’t feel fresh. It’s all just so tame and ordinary, no matter how it tries. The biggest problem is that the ships have no sense of weight or thrust. You just slide around firing ineffective weapons at each other until someone explodes. You then pick up their remains and drop them in the goal. It’s an objective that becomes thin after just a few plays, unless you invite someone to join in, of course.

You can choose between Career and Battle modes, but both are pretty much the same, although Multiplayer elevates the game to the level of throwaway fun, as you blast at each other and swear and shout when someone cashes in on your corpse. It doesn’t make the poor mechanics feel any more solid, but it stops you caring so much. The most annoying aspect is that to progress in solo Career you must finish first in a level, which can be incredibly frustrating at times.

Fluster Cluck is a game devoid of ambition. It looks, feels and sounds like a mobile game, and the loose mechanics aren’t helped by a premise that goes stale inside of half an hour. The younger audience it’s aimed at will find it frustrating, while adults will find it listless. There is fun to be had in a group, but you’re unlikely to find a reason to keep coming back to what feels like the bonus level of a much larger game. Frankly, on PlayStation 4, we expect much more.#

Multiplayer is fun in short bursts

2 step authentication is live for PlayStation Network accounts in Europe