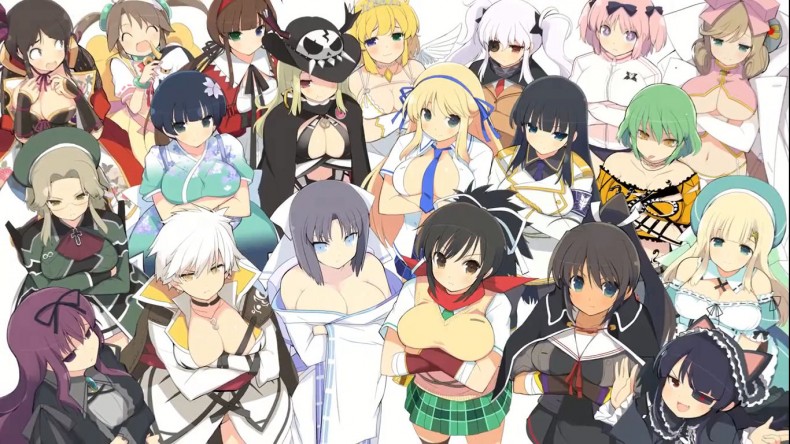 I’m not even referring to the in-your-face boob and butt barrage that many would see as the game’s tantamount sin, I’m actually thinking more of the gameplay when I query the game’s shaky quality. From a plot and character perspective there’s a lot to question Senran Kagura Shinovi Versus for, sure, but at the same time you sort of can’t. Why is that? Simply because Senran Kagura Shinovi Versus achieves what it sets out to do, which will appeal to some people while causing others to intake far too much breath and trouble their eye sockets due to excessive widening. As with prior Senran Kagura titles this is a game detailing the exploits of many female Shinobi characters within the Senran Kagura universe as they do battle with each other and the evils that threaten their world. Shinovi Versus continues the tale of the Hanzo and Hebijo schools while introducing two new academies and groups of characters, all of which are yet further permutations on the basic design archetypes established in the original game. Then they fight, and then they lose their clothes.

The plot isn’t even terrible. The characterisation here is almost appealing – even if the script is laced with dangerous amounts of innuendo as well as females that just want to, well, grope other females – but the narrative is quite sizable, does genuinely have a heart, and sort of manages to avoid outright perversion in its script as close to the line as it dares to skirt.

It is more risqué than the 3DS title though. For example, beating a boss character will strip them of their underwear, though this does cause a massive yellow smear to obscure more of the girl after this moment than when they were actually wearing clothes – it’s almost like the developer is actively laughing at their audience with this sort of effect, but at no point is Senran Kagura as savvy in regards to this as, say, Bayonetta 2. Clearly a bigger budget has led to a team more willing to push the concepts of decency as far back as possible. It’s pandering to its audience, of course, but you’ve got to admit that it panders well. The thing that’s annoying, to me, is the way that some parts of Shinovi Versus’ design are like the above, in that they feel as if they’re actively misleading and subverting of expectations of its audience, while others are clearly just perverse for the sake of being perverse. The fact that the main unlocks are costumes, accessories and lingerie makes it fairly clear where the design team’s focus went for much of Senran Kagura Shinovi Versus’ development, and what its true intentions are. Heck, you can even modify exactly where accessories are positioned on a character once you unlock them. I’m not sure if that’s dedication to player freedom or just weird.

Anyway, the half of the game that’s not playing dress up is combat, and here’s where I genuinely have my issues with Senran Kagura Shinovi Versus. Not that I think all games should include unlockable “sexy maid” outfits, more that I think a game should be a good game first and foremost, and Shinovi Versus’ credentials in this area are sketchy. The game presents itself as a 3D brawler, with you running around arenas and beating up lots of fodder before larger boss characters appear and give you a challenge. You have weak and heavy attacks, a jump, a dash (that can follow a launched enemy), a block and a few special attacks.

The design feels very “Musou”, with easy combat focusing on large numbers over individual difficulty. Within a few hours I was able to pull off a combo in excess of over 1000 hits during one level through simple light attack combos and timely dashing. The problem is, the combat is far too easy. Musou games are interesting due to the overlying tactical element of knowing where to be and when, and the option selecting apparent in choosing which combo ender to use in any given situation. Senran Kagura Shinovi Versus nails the idea of “herding” foes so you can hit them all at once, but then it’s simply a case of hammering the attack button. There’s little thought to the actual attacking – no way to truly optimise your assault – and this, coupled with a terrible camera that often obscures enemies from view without manual adjustment, leads to massively unsatisfying crowd combat. At a higher difficulty the AI will occasionally break out of these bread and butter attacks, but it’s too easy to hold block and then repeat the string again once they drop their guard, or you land the incredibly basic counter. That’s the problem – in a game about combat, the combat is mind numbingly simplistic, assuming you can wrestle the camera into position. And I say again: that’s a shame. The game is technically excellent, running at a rock solid and silky smooth framerate, with some excellent character models and gorgeous animation.

There is good in Senran Kagura Shinovi Versus, but that good is often found outside of the actual game itself. If you simply want some mind numbing, button bashing, ridiculous combo combat alongside some silly, non-PC anime plot about female ninjas and their oversized cup sizes (that you can also dress up) then have at it. Those looking for something with some actual gameplay depth? This isn’t the series for you, but nor is it trying to be.

Senran Kagura Shinovi Versus attempts to take the busty series into the domain of the 3D brawler, but comes off as a “musou” game without the strategy - and with less interesting combat.